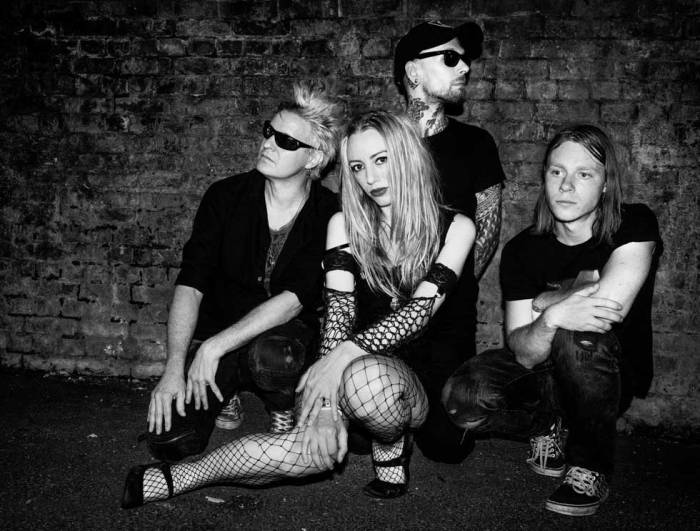 Two years on from the album Box Of Chaos outshining its impressive predecessor The Lost Refuge, which had started the trend by eclipsing the band’s debut Sick Note, UK punksters Healthy Junkies have again repeated the feat with their fourth album. Delirious Dream is a collection of tracks embracing the band’s broadest kaleidoscope of flavours yet over a punk ‘n’ roll landscape; a 15 song strong release which is for sure their finest moment to date keeping expectations clueless and the imagination enthralled.

Recorded with Brian O’Shaughnessy and mastered by Pete Maher, Delirious Dream is the songwriting and sound of the band at its boldest yet most intricately woven. With the founding duo of vocalist Nina Courson and guitarist/vocalist Phil Honey-Jones tapping into their most imaginative depths yet alongside the rhythmic prowess of bassist Dave Whitmore and drummers Pumpy and Adam Lewis, Healthy Junkies have created a new magnet of sound which needs mere seconds to demand attention through album opener When All Is Said And Done.

Instantly the track is strolling eagerly through ears with a rich melodic hook amidst eager rhythmic bait, all the while keys adding their intimation. Courson’s ever alluring vocals quickly join the mix, adding elegance and harmonic radiance to the earthier breath of the song. With drama soaking every note and syllable, theatre intensifying across the host of twists and turns making up the simply outstanding punk ‘n’ roll incitement, the track immediately sets the high creative bar and striking character of the release.

This Is Not A Suicide brings its own exceptional roar of sound and enterprise straight after. Dirtier and grumpier than its predecessor and driven by attitude fuelled riffs and senses biting rhythms, the track sets its own particular pinnacle within Delirious Dream. Nagging grooves and garage punk spicing also add their incitement to the bracing trespass before the even tempered rock ‘n’ roll of Juliet’s Call saunters in. Like a gothic rock nurtured punk inspired collusion between Siouxsie and The Banshees and In Evil Hour, the track is pure virulence.

The band embraces more hard rock like hues for next up Johnny Demented, its raw sonic haze magnetically tempered by Coulson’s angelic tones. The song did not quite raise the roof as its predecessors in appetite and the passions here yet from start to finish it is a full captivation raising the ante as its holler and breath erupt across its eventful body.

Through the infectiously tenacious croon of Some Kind Of Girl and Ghost Without A Soul with its shadow draped atmosphere, riveting sound and adventure abounds with unpredictability and rapacious enterprise while All Talk brews an emotive entanglement of old school punk and classic rock in its own individual recipe of temptation. All three tracks easily grip ears and appetite though the delicious punk instincts and pop flirtations of The Sound Of My Guitar outshine all. The track is Class-A addiction spurning late seventies kissed new wave/punk rock slavery as ripe with hooks and celebration as a festive holly bush.

The following Boy Or Girl is something akin to a meeting of early Blondie and The Photos and quite irresistible with its successor, Meet & Greet preyed on an already aroused hunger for what is on offer with its predacious escapade resembling a kind of X-Ray Spex/Spinnerette collusion as the band take a swipe at musical greed. It is simply another major highlight of the album echoed in success by the frisky indie/pop punk animation of This Condition with Honey-Jones leading and dueting on vocals.

The album’s worst track is next and These Boots Are Made For Walking is nothing less than full pleasure as Healthy Junkies make the classic their own by giving it a predatory breath as classic rock guitars blaze before James Dean rumbles with old school punk ‘n’ roll lust and uncontainable ebullience.

The album concludes with the pair of Theft and Part 2. The first is a rebel rousing protagonist vivaciously prowling the senses before breaking into a similarly ravening rock ‘n’ roll canter with erupting psych rock bred flames while the second is its dark but incandescent underworld where physical and emotion elements of the tracks shimmer, smoulder, and burn.

Together they make for a fascinating conclusion to Delirious Dream, echoing its title despite their brooding volatility and showing there is so much more to the creative palette of Healthy Junkies, one they have still yet to fully explore.

We always feel a sense of excitement when a new encounter with Healthy Junkies comes along as they have always manage to outdo themselves so far; Delirious Dream is no exception; in fact it pretty much outshines most other punk/rock nurtured offerings around this year too.

Delirious Dream is out now via Banana Castle Records/Cargo Records UK across most online stores.