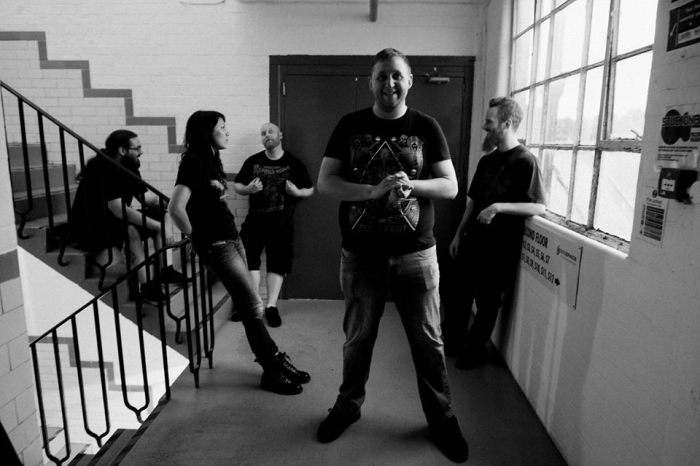 This year has seen a host of impressive and imaginative progressive/technical metal releases and joining the most compelling and thrilling is Heavy Climb, the debut album from Akarusa Yami. The UK band has uncaged a mouth-wateringly unpredictable and fascinating proposal with their first full-length, not only building on the potential of previous successes but setting out a whole new template of adventure and uniqueness to explore further ahead.

Heavy Climb is simultaneously raw and sonically elegant, imposingly fierce and seductively bewitching and as suggested earlier, a striking step forward from its creator’s previously acclaimed offerings. Formed in 2010 by guitarist Tom Clarke and vocalist Tom Brumpton, the Nottingham hailing Akarusa Yami quickly whipped up ears and support with their sound and live presence, and in turn debut EP Ouroboros the following year. The quintet’s singles Third Eye, Wide Open and Millennium Is My Salvation lured potent national airplay across Europe and online whilst the band began being featured in the likes of Terrorizer, Zero Tolerance, and Metal Hammer (Norway). Their generally well-received second EP Trace Element Rebirth arrived in 2013, following successes like the supporting of bands like Textures, The Ocean, and Aliases as well as appearing at the Bloodstock Festival also in 2011. It also saw the new emerging direction in the Akarusa Yami sound and songwriting and it is probably fair to say for some it was not an immediate persuasion. It was though a gripping sign of things to come, and an intriguing teaser for what is now Heavy Climb. With a line-up completed by bassist Jake Bennett, drummer Adam Jones, and guitarist Julia Goatly, Akarusa Yami have honed and experimented with their sound, stretched their ideation and craft and subsequently the imagination of the listener with Heavy Climb; the result being certainly for us one of the most enjoyable and enthralling encounters of 2015. 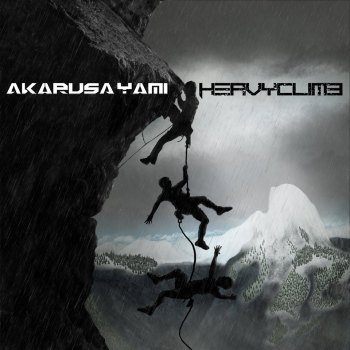 The album opens with The Old Man By The Fjord where instantly rolling rhythms align with engaging melodies and a shadowy bassline. The song does not grab attention but coaxes it for the same success before riffs get steely with their snarl and the voice of Brumpton growls attitude and aggression. Now ears and thoughts are firmly awake and held, and it is here where expectations start to unravel as the band begins their relentless emprise of invention and unpredictable ingenuity. A slip into an infectious passage of glowing melodies alongside clean vocals and harmonies brings a progressive tempting which is almost Horslips like, its presence entwined with more technical predation amidst the pulsating lure of keys. It is an engrossing start to the album which just gets stronger and more endearing with every listen, as indeed does the album.

Second track At Last, Sunlight (Endlich, Sonnenlicht) makes its entrance on a warm jazzy field of enticement, though the track soon uncages its ire and aggression fuelled volatility in a tempest again infused with gothic keys, sonic suggestiveness, and clean vocals which again catch thoughts initially unaware. It does not quite live up to its predecessor or the following title track but feeds an already strong appetite before its successor bawls at and brawls with the listener with irritable rancor and magnetic resourcefulness spread by the atmospheric keys and perpetually shifting attack of the guitars. The rhythmic swings of Jones are a constantly addictive bait in the mix too though it is the perfect union of metal savagery and electronic charm which steals the show.

The imagination is taken on a moonlit flight with the instrumental Long Nights In The City next, its ambience and emotive climate moody and melodic body exotic. Keys and guitars virtually writhe around and alongside each other in the minimalistic but thickly evocative piece before A Monument Built To Carnal Desire comes forward with its own melodic calm in front of a predacious and inventively tenacious storm. As the song erupts and spills its antagonistic and technical prowess, synths tour a vibrant electronic palette, at times flirting with Nintendo-core teasing and more often flowing with progressively symphonic hues. It is an absorbing engagement, the song managing to combine bestial and beauteous extremes in one thrilling incitement, a fusion taken to fiercer depths by And The Night Will Take Us All. Rhythms are barbarous yet anthemic with the guitars a source of swirling sonic toxicity whilst Brumpton leaves no animosity core stone unturned, yet throughout the bruising assault, smart hooks and electronic enterprise add their alluring touch and magnetism. It is the virulent irregularity and schizophrenic rhythms which lure the biggest portion of the ardour bred for the track though, they and the glorious melodic majesty falling from jazzy/Latin kissed guitar strings midway.

I Work In Formaldehyde sees the band again immerse in its electronic/industrial inspirations early on before spinning another grouchy and insatiable web of carnal riffs, lethal beats, and the ever compelling vocal roars of Brumpton. It is angry, dark, and sinister, a song to keep the imagination and passions involved past its departure as too the exceptional Les Mere Terribles, which after the noir lit electronic lead of the brief instrumental Loving Parents, wraps ears in a spiralling of djent spiked trespasses and senses binding melodic enterprise. Vocals and rhythms take no prisoners, their intrusive drive a bracing onslaught enhanced rather than tempered by the spellbinding caress of keys and warm melodies as well as the outstanding clean vocals, Brumpton showing his great prowess and diversity.

The album’s pinnacle is followed by its most fascinating offering. The Natasha Trade is a haunting drama of a life trapped in a stark, unforgiving, and destructively enslaving situation voiced by guest Joy Shannon from Beauty Marks. It is a strikingly cinematic proposal, like a theme within a dark visual incitement such as Sin City and though it does not quite fit in with what came before in many ways, the thought of it not being included feels even more wrong.

Akarusa Yami have made a huge leap on from the ground seeding encounters of their previous EPs and now with Heavy Climb announced themselves as one of progressive/technical metals brightest and thrilling protagonists.

Heavy Climb is released on October 5th via the Akarusa Yami Bandcamp profile as a name your own price download.

Like Loading...
‹ Raging Speedhorn Announce Winter UK Tour And Offer Free EP As Part Of Their Pledge Campaign
She Must Burn – Self Titled EP ›