She Must Burn – Self Titled EP

It is a ferociously voracious cauldron of intent, a ravenous tempest of corrosive intensity and imagination, and one of the most riveting and exciting debuts to be uncaged this year.

The release is the self-titled debut EP comes from UK metallers She Must Burn, a London sextet creating a bit of a forceful stir and it is easy to hear why with this raging encounter. Theirs is a furnace of sound and flavours woven into a metalcore seeded canvas infused with further ripe essences of symphonic and black metal with rich gothic overtones. It is a searing maelstrom laying siege to the senses which just as quickly impresses as the songwriting and craft behind it. From rabidly varied vocals to debilitating blast beats, right through to symphonic beauty, the band’s music is a vicious yet poetic kaleidoscope of contrasts and textures cast into fascinating and thrilling soundscapes fuelled by intimate malevolence. It is a startling encounter as proven by a release which just gets bigger and stronger as subsequent listens lure ears deeper into unpredictable and gripping layers of invention.

She Must Burn emerged in 2014, brought to life by guitarist/producer Terry Clarke to realise his musical vision. With a line-up completed by vocalist Joseph Louis Sinclair, keyboardist/vocalist Aimy Miller, guitarist James Threadwell, bassist Kyle Bird, and drummer Rhys Andrew Cooper, She Must Burn have already made a thick impact on the British metal scene live. Now it is the turn of broader stretches of national ears to feel their potency ahead of UK tours supporting Cradle of Filth this October and Heart Of A Coward across November with their first EP. 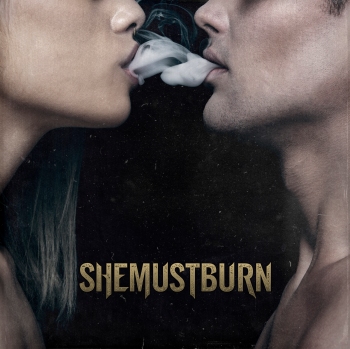 The encounter opens with the brief but technically and evocatively potent Ascension, its celestial melodies and ambience shadowed by a portentousness which erupts as the track evolves into the fearsome and equally enticing Possessed. From its first breath, guitars create a web of virulent hostility and enthralling enterprise upon which rhythms descend with bestial ferocity. Add the great raw and scarring vocal assault of Sinclair and hell has opened its doors, yet this is masterfully tempered and entwined with the flowing radiance of the keys and the equally alluring siren-esque voice of Miller. Across the song’s body dark and light, destruction and beauty unite, not in conflict but in a blackened and symphonic drama which has the imagination as enslaved as ears and appetite.

As shown again by the following The Misery, the She Must Burn sound is a creative and physical bedlam but one with ingenuity and control which makes everything seamless and complimentary in their collusion. In the hands of another it would most likely unravel into an incoherent stream of ideas but as the third track engulfs and trespasses in ears, there is nothing random and uncontrolled about the sonic adventures cast by She Must Burn. Predatory and seductive, the third song writhes and violently twists under the drive of the increasingly varied and impressive delivery of Sinclair but within the entrapping call of synths and their expressive dark elegance. The song constantly evolves though, never allowing thoughts to settle and expectations to get a glimpse as its infectiously busy and creative turbulence offers more rewards and layers with every trip into its maliciousness.

Into Light opens with a classic but again unique symphonic/gothic croon from the keys and voice of Miller, its warm caress prowled by brooding shadows which increase in intimidating agitation as the short song continues to shape the imagination with its melodic flame. That ruinous furnace finally erupts in Wish to Exist, its metalcore animus in full voice at the beginning but again merged into a subsequent compelling tapestry that snarls and tears at the senses whilst embracing ears in the most majestic of melody rich and emotive reflections.

The album is invigoratingly completed by the equally rabid and bewitching Eclipse, where dark and insidious rancor frees its vicious animus in perfect company with entrancing elegance and immersive beauty. It is at this point on the first listen, and only proven time and time again, that the success of the She Must Burn sound is realised to lie not so much in the corruptive or beauteous extremes, as skilful and important as they are, but how the heart of the song in rhythms and riffs for example, serve both the bases they blossom upon simultaneously and equally. It is a perfect fusion the band has honed which they then colour and shape to their imagination’s content.

After yet another fevered listen of their EP it is very easy to claim that She Must Burn are going to make a big impact on the metal scene.

The She Must Burn EP is out now via Ghost Music.

Tags: Black Metal, Cradle of Filth this October, Heart of a Coward, Metalcore, RingMaster Review, She Must Burn, symphonic metal