To The Lions: Self Titled EP 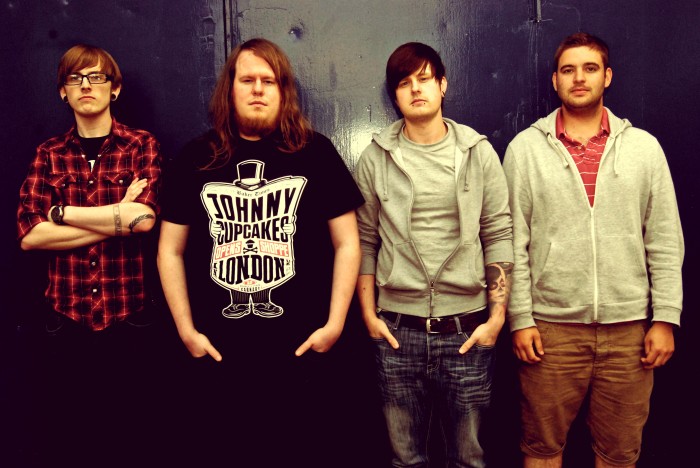 If you want your musical balls given a real beating whilst being caressed with melodic enterprise to sooth the damage, then time to meet UK metal band To The Lions and their tremendous new self titled EP. Four tracks of raging brutality and impressive melodic invention, it is a fresh and imaginative addition to what has been a year of promising and strong emerging extreme and metalcore fuelled UK bands. The Cambridge quartet do not quite fit in any exact category which is the first good thing about them but certainly they can be as aggressive and angry as any and just as inspired with their inventive ideas and smoother passions too.

Formed in the last weeks of 2008, the foursome of vocalist and guitarist Tony Stead, guitarist James Croft, bassist Nigel Ferguson, and drummer Mark Richards, have spent the last year and a half on a blur of gigs as they promoted and shared their well received debut EP Spent Shells. Shows with the likes of Forever Never, Orestea, RSJ, Sworn Amongst, and Kobra and the Lotus, have gone to help spread their presence and sounds across the South of England and with the new EP it would be surprising if the next time they appear on the radar we are not noting them as being at the fore of emerging British metal.

From the moment There’s A Reason winds its scorched notes around the ear and bursts into stiff muscular assaults of riffs and barbed rhythms, there is a feel that something mighty is about to let loose on the senses. The band does not disappoint as the venomous tones of Stead rage over what has become slightly subdued yet intrusive sounds. It then shifts into an unexpected but skilfully brought melodic breath before merging the extremes of intensity, entwining them with invention and passion. This makes for a shifting varied track which arguably without lighting undiscovered beacons is fully intriguing and in its latter progressive air, wholly beguiling.

From a strong start the ride gains greater heights of excellence and addiction. The following Oceans Away bawls like a storm from the off, its surging riffs and challenging intensity a crush on the senses. Beneath it all though there is a melodic presence waiting and soon it explores the track in unison with the abrasive drive of the song. With great harmonies and group shouts tempering the vocal menace and impressive fiery guitar play keeping the tempest of shuffling barbaric rhythms honest, it is a tempest to devour eagerly and deeply. As the guitars burns with an acidic groove and the anthemic chorus returns for its climax, the track leaves one breathless and grinning.

The other pair of tracks carry no intentions of easing up on the intense rampage, to only further pleasure. Wolves And Lions is a metallic scream, an inferno of bruising riffs and bitter soaked vocals upon serpentine grooves and thrash tinted expulsions of noise and sonic vindictiveness. It twists and blisters the senses whilst taking pot shots at the ear with an armoury of destructive malice from the violent creativity of the band.

The closing Fourth like the opener does not stand right out from the crowd like the second and third track do, but still open up a maelstrom of satisfaction, pleasure, and anticipation for more from the band. It is a powerful and thunderous track which again show To The Lions as a band with a flair and skill at melding light, dark, anger, intricacy, violence and composure, into one boiling onslaught of quality.

Remember the name To The Lions, if they continue to progress as they are they will be a big force and name in future years.

Like Loading...
‹ Onoma: All Things Change
Charlie Lankester and The Mojo Killers: Song In A Minor Key ›