Chime Hours from London based electro pop outfit Evokateur is the second of a trilogy of EPs from the duo which began earlier in the year with the soulful delights of Crow’s Wedding. The first brought an atmospheric elegance bound within sophisticated electronic sounds whilst an undercurrent of shadows whispered eloquently. Chime Hours continues in the same emotive vein with five tracks which switch on thoughts and emotions with ease whilst caressing the senses with magnetic warmth.

Evokateur is made up of producer /composer Hector Villaraus and songwriter/lyricist Sarah Villaraus, who from the release of their debut single Wolf Girl last year which included an industrial remix by legend Gary Numan, and its successor Same As You, has garnered perpetually growing praise and acclaim. From their releases and live performances the husband and wife duo has ignited forceful waves of attention from media and fans which the new release can only bring acceleration upon its release on August 20th.

The release opens with the glowing presence of 1684, a song which immediately mesmerises through the wonderful 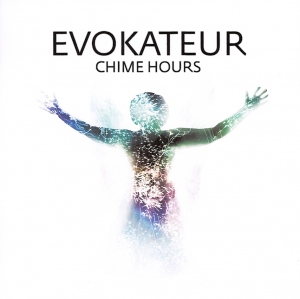 voice of Sarah and the enveloping and triumphant sounds of Hector. The song shows the release is a continuation to the music of the previous release, its body offering further impressive examples of their combined imagination and expressive craft. The song has a reserved entrance with the music keeping the shadows company as the voice of Sarah heats the skies with her dazzling and hypnotic tones. There is a gentle shoegaze feel initially which reminds of artists like Strobegirl which soon expands into a full electronic weave brought with an early Depeche Mode breath. The music fills every pore igniting heated energies and though the song never erupts into a gallop it certainly excites the passions into a pleasurable agitated state.

Whereas the first song was a vibrant pop driven treat the following Post is a deeper emotive embrace upon the ear which opens up more thoughts and feelings before its incisive touch. Melodically enticing and sonically inciteful, the heart of the song reigns as it seals the listener into a cinematic soundscape of passion and reflection. One of the great things about Evokateur is the contrasting yet understanding companionship of sounds and vocals. Perfectly wrapped in harmonic beauty and melodic elegance there is a crystalline element to the compositions of Hector, their surface often sharp and slightly coarse working alongside and against the perpetually warm and teasing kisses of the vocals from Sarah wonderfully.

The single from the release White Horses is quite magnificent, arguably the best song the pair have created to date. The track is a sizzling mix of energies and sirenesque sounds which ebb and flow like the sea with just as much power and grandeur. At times the song teeters on a stomp upon the senses and in others it gives a touching embrace whilst leaving the air slightly blistered. As with all the songs there is a dark side or element at play, on this song it disturbs the whispers with a refined caustic rub to add tension and electricity behind the vocal enchantment.

The release is completed by How Long and a remix of White Horses from Fear Of Tigers. The first has a wonderful crunchy ambience throughout, a crispness to the sound for a musical equivalent to walking though early frost bitten grass on an autumn morning. It is a fresh and provocative texture alongside the equally evocative words and vocals. As much as we can wax lyrical about the music, the composition of and power of the words are just as marked and impressive. The remix gives the single a poppier yet feistier charm, removing much of the underlying darkness and turning it into a more riled energy than on the original. It is a great interpretation and evolution of a great song though still comes second best.

Evokateur is seemingly tagged more as an electro goth band which not really the truth though from the pervading shadows within their music it is a reasonable label in part. The band creates electronic music which draws on and delivers passion within inciteful expression to set them apart from most. They like Chime Hours are outstanding and getting better release by release.