Heavy metal especially the old school classic kind and The RR has never really seen eye to eye, the likes of Iron Maiden, Def Leppard, and Saxon igniting more discontent than pleasure. It is personal taste of course and as open to all as we are it is makes it rare for the genre to offer something up for us to find appetizing. One of those rarities comes in the shape of the Rock The Night EP from British classic heavy metal rockers Monument, a little treat which without any chance of making our end of year best of lists left more than a pleasing impression and satisfaction behind it.

Formed by vocalist Peter Ellis (ex- White Wizzard, The More I See), the London based quintet do not hide their influences and inspirations, combining all into a riotous and compulsive sound of their own. Their new release does not break into new avenues or rip up the rule book but simply brings the feistiest heavy metal party you can wish for right to your door. Completed by guitarists Lewis Stephens and David del Cid, bassist Jim Ramses, and Matt C on drums, the band seem intent on giving a new life and freshness to the near corpse like state of NWOBHM, something which would normally give nothing but chills this way but Rock The Night EP actually manages to make it almost seem an appealing prospect.

The title track erupts in the ear with an immediate intent to excite and fire up the senses, soaring screams and raging riffs 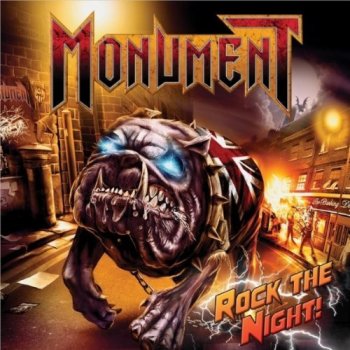 instantly taking over the ear. The song is an insatiable charge of energy and metal passion which leaves no pore or synapse devoid of melodic enterprise and charging intensity. The guitars reign on the track leaving one glowing from their fiery display of forceful riffs and enticing invention whilst the solos leave one drooling, which maybe is not surprising as the song features a guest spot from Judas Priest guitarist Richie Faulkner. The vocals are as expected from Ellis, expansive and highly charged with strong group harmonies adding their enthusiast companionship. Arguably the song offers nothing new except fully energising sounds which have not been this enthusiastic in the genre in a long time, then again not being fans we may have missed plenty of similar moments?

Whereas the opener leaves only hi octane energy and enthusiasm in its wake the following Carry On is a more expected composition. It is hard to call it predictable as again the guitars and vocals are nothing less than impressive whilst the rhythms of Matt C take instant charge of the ear with their powerful and commanding tight grip, but it fails to excite quite as openly. With surging riffs and plenty of chugging ready to link the scorching melodic play, the song is enjoyable without stoking too many fires something which cannot be said about Midnight Queen.

Best song on the EP, the track is addictive from first note to last, the Ozzie like vocals playing well amongst the brew of sinister melodic enterprise and menacing sprawling energy. From the vocal and additional harmonies through to the expressive guitar work the song captivates but it is the bass of Ramses which steals the thunder. Steely with the hunger of a predator it brings a dark shadow and breath all of its own, surely a pact with the devil at play which spoils over in the following Fatal Attack. There is a plethora of good things on the release but his presence is the highlight.

As said the bass continues to ignite greater heights on Fatal Attack, it is as if Ramses has been unleashed and he is making every moment count but the song as a whole is nothing less than thoroughly pleasing. It has a snarl and bite which is distinct from the other songs on the release to make it alongside its predecessor and the title track. One of the strongest moments on Rock The Night.

The closing Blood Red Sky continues the strong and gratifying pleasure surprisingly incited from the release and though it slips a little against the previous duo of songs still holds the imagination and ear with ease.

Monument with the Rock The Night EP laid waste to expectations to replace them with surprised pleasure. If this is the new state of heavy metal maybe there is a home here for it after all.