Lay Down Rotten – Mask of Malice

If you are looking for soaring melodies and intricate meanderings that leave fingers twisted inside out then run for cover now for the new album from German metalers Lay Down Rotten only offers brutal and barbaric obliteration that leaves one a devoured husk after it unleashes the full explosive force upon the senses. Mask Of Malice is relentless, a beast that stalks, punishes and then batters the senses into further submission. It attacks with only one intention, to hit directly at the core with cataclysmic riffs and an intensity that would find the primal forces of nature think twice before standing in opposition.

Formed in 1999 initially as a solo project by vocalist/guitarist Daniel Jakobi, Lay Down Rotten within a year was a fully armoured band and on a formidable constant ascent. From their self released demos Colder As Cold and Way Of Weakness of 2000 and 2001 respectively through their five albums leading to Mask of Malice, the rise of the band has been marked and unstoppable as media and fans alike succumbed to their ferocious and staggering metal sounds. Their album of 2006 Breeding Insanity was the point when things really burst forward at a defined rate with it leading to the band signing with Metal Blade Records. The third album with the label, Mask Of Malice is the first with new guitarist Daniel Seifert who replaced Jakobi who left the band in 2011, and a continuation of the sound that Lay Down Rotten own and know so well.

The album starts on an almighty high with the staggering Deathchain, a track that violates every corner of the body, 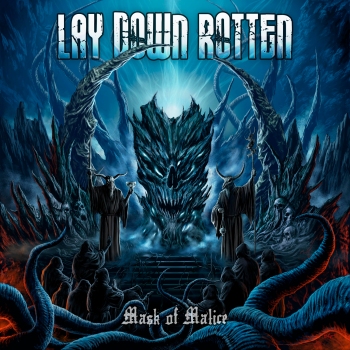 Mountainous riffs tumble onto the ear whilst a malicious groove grips the senses twisting and twisting until they snap. The guitars of Seifert and Nils Förster show no mercy whilst the bass of Uwe Kilian stomps with riffs made of iron all over the carcass of what was the ability to feel. These three would just be about survivable but with the incredible drumming of Timo Claas obliterating any living cells left alive and the blackest pit spawn growls of Jost Kleinert spewing bile from every syllable there is no escape or survival. Like the album itself the track is not bursting with innovation but when metal is this relentless and mesmeric there is glory in death after all.

After such a tremendous start there was bound to be a decline, though that is not really the fairest word to use as the impressive tracks that follow in the likes of the uncompromising A Darker Shade Of Hatred, the predatory And Out Come The Wolves, and the crushingly demonic The Devil Grins, the band shift emphasis to a heavier, darker intensity. Less accessible and violently upfront the songs stalk and sprawl around the ear before seizing with an over powering grip. The venomous pace and malevolent aggression is never reduced but delivered in a more structured way than possibly seen from the band before that makes the songs more journey to explore than an instant barracking of the senses.

As final song The Loss departs and leaves the body shell shocked and numb the knowledge that one has just experienced one of the best intensive intrusions for a long time brings a very satisfactory feeling. Ok the album will not bring you new ventures or particular expansive diversity but it is doubtful many albums or bands have unleashed as enjoyable a fury upon your soul as Lay Down Rotten do with Mask of Malice.