Hailing from the suburbs of Melbourne, Desert Kingdom recently made their introduction to greater attention with their self-titled debut release offering seven slabs of fiercely muscular stoner bred rock ‘n’ roll relishing the band’s inspirations. Certainly uniqueness is not as forceful as the physical power and prowess of the band but there was no escaping a richly pleasing and rousing first glimpse of the potential loaded quartet.

Consisting of vocalist Ritch, guitarist Emmett Young, bassist Brett Wright, and drummer Paul Coste, Desert Kingdom swiftly get down to business as opener You’ll Burn descends on ears with sinew woven riffs and swinging beats. Instantly infectious, it is a commanding coaxing for ears only increasing its potency as choppy tenacity infects those initial chords and a heavy grumble escapes the bass. The raw scowling tones of Ritch are equally as persuasive, it all combining for a fiery slice of stoner heaviness clothed in the influences of bands such as Orange Goblin, Kyuss, and Down. 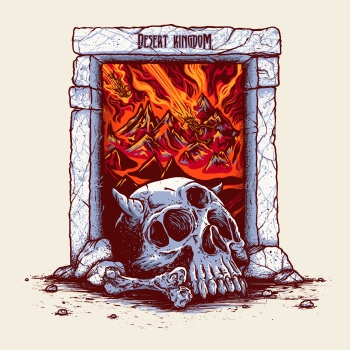 The atmospheric, drama soaked entrance of Mafiaso Opera deceptively makes a gentler proposition but its sinister air is soon a tempestuous torrent of catchy beats and predacious riffs. As vocals rage spicy grooves wind around the rhythmic temptation, varied metallic strains linking arms in a familiar yet fresh incitement. Brawling with the senses through every passing second, the track quickly eclipses its impressive predecessor, stomping with raw aggression and captivating enterprise before Doghouse Blues prowls with an equally rapacious intent to that of the previous track while military seeded rhythms impose their agreeable authority. Like a blend of Gruntruck and Pantera with a whiff of Mary Beats Jane, the track irritably rumbles leaving satisfaction full if not quite matching the heights sparked by the pair before it.

If the last track prowls then 7 Years stalks the senses with its doom bred trespass, sonic flames erupting within the pressure as choice grooves entwine voice and the engaging ponderous gait of the rhythms. It too lacks the sparks of those early successes but again only and increasingly pleases as its waspish sound intensifies in tandem with the song’s boisterous aggression with subsequent blues toxicity adding to the fun.

Abstainer rocks like a lustful dog next, its hungry riffs and heftily swung rhythms alone a carnal incitement while Fuck You is sonic belligerence and muscular aggravation bred to raise the spirit as the release re-hits the early plateau it began upon. With spicy hooks and scorching grooves, the track has all the attributes and open potential to raise expectations that Desert Kingdom will come under the scrutiny of the broadest spotlights if not now in the time ahead.

Concluded by the boozy blaze of Whiskey, sawdust and spit rock ‘n’ roll with all the groove laced liquor you could wish for, the release is a very easy to return to stomp. Originality might be a touch on the scarce side but enjoyment is full, something never drawing complaints.

The Desert Kingdom album is out now via Black Bow Records across most online stores.