After a twelve year wait US black metalers Ritual has returned with a new impressive album in The Resurrection, a release that despite a long hiatus shows the band has moved with the times and changes within the genre to bring something that though not necessarily innovative is fresh and more absorbing than the majority of black metal offerings this year. Though not flawless and from early reviews elsewhere fostering a mixed reaction, The Resurrection for us is an impressive and thoroughly engaging album that offers a less intense but more incisive and warm melodic flow of sounds. To some it might seem lightweight but without the venom and spite that most genre releases still feel obliged to carry and its clear openness allowing guitars and bass to express with a defined clarity the release is a vibrant and intriguing pleasure.

Formed in 1993 Ritual was one of the prominent and more influential purveyors of early US black metal, their three albums The Summoning (1995), Demonic Winter Metal (1997), and Soldiers Under Satan’s Command (1998), all making a distinct mark in the ears and upcoming band’s creative thinking, though it is fair to say without making a ripple in the immense wave of European black metal.  Then the band split and the years passed until Ian Fleming resurrected the band as a one man project, writing songs that would become The Resurrection. 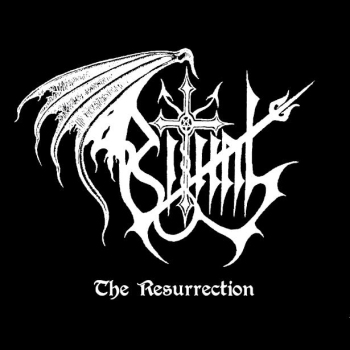 Released via Funeral Rain Records, it is easy to see why some find the album underwhelming as it has very little malevolence, bitter nastiness and evil intent that is expected with black metal. The melodies and creative play is warm against cold themes within the songs and at no point even in the great closing instrumental of ‘March Of The Damned’ with its almost celebratory parade of the aftermath of life and lost souls, does the album step beyond the melancholic into total despair or hopelessness. Personally this brings a fresh and engaging element that is pleasing and a welcome change at not having to fight various aspects of a song and its creativity to find its heart and soul.

Just as it ends the album starts with an instrumental in ‘A Funeral For My Heart’, a piece that is poetically emotive from touching expressive guitars that with a slow dawning open up the senses to its well written passage. As it emerges throughout the album on most songs, nothing is complicated or overdone, its simplistic creativeness allowing the emotion to flow easily. This opens the way for the title track with similarly flowing guitars leading in the rasping caustic vocals. The malice within the album primarily comes from Fleming’s delivery and intent allowing the music to bring the light and uplifting elements that win out on all tracks. This is not to say The Resurrection is an ‘indie’ version of black metal but it is wonderfully accessible and more eager to share then to consume and violate like most equivalent albums.

Each track offers something different with a varied creativity and delivery. ‘Executioner Of The Elder Gods’ is an excellent excited stomp with scything guitars and rampant basslines and the best track on the release, closely followed by the chest beating declarations of ‘This Means War’, its anthemic shouting and powerful energy the hardest and unleashing the most anger to burst forth from within The Resurrection. The threatening ‘Nightmare’ and ‘Temples Of Baphomet’s Sons’ also whittle away at the senses with some display of vehemence especially vocally but again musically and especially from the bouncy basslines there is always that rope of hope and safety to cling to.

As mentioned earlier the album is not without a few ‘negatives’ as in the vocals of Fleming lacking real diversity across the release and though he is strong enough it leaves the music the task to ensure ones focus. Also there were moments calling out for more progressive guitars sounds and intricacies to send some surprising tingles through the ear. Saying that though The Resurrection is a great album and one of the most pleasing and appetising black metal releases this year with its turn towards the light rather than joining the rest in the black shadows and should be given full attention.