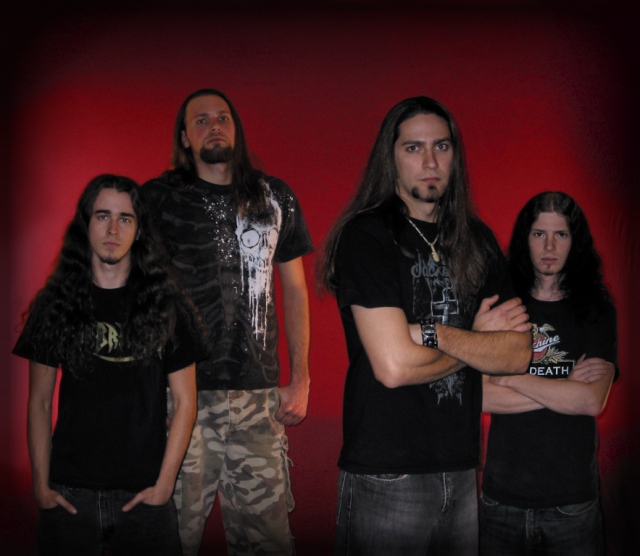 It may have taken many years, a tank full of dedication and obvious hard work for Chicago thrash metalers Degradation to get to the point of releasing their debut album but for us destined to eagerly devour its thrilling aggressive sounds that faith and determination has paid off wonderfully. Juggernaut is not necessarily the beast in its title but it is one impressively consuming stirring ride of runaway metal.  A release that lights up every sense and comes armed with all the essences that make metal an undeniable addiction.

Formed in 2001 by guitarist and vocalist Alex Manske, guitarist Mike Hartman, and drummer Joe Manske, Degradation has strived and fought tirelessly to get their sounds out there in. The music worlds at times an ungrateful beast has made their journey long but for us on this evidence worthwhile. 2007 saw the band’s debut EP Unleashed released, its four tracks gaining them some good media acclaim and response. Bassist Steve Holy joined the band in 2009 with the following year seeing the band entering the studio to create Juggernaut. Consisting of eight vibrant and constant blood pumping energy, the album gets its release via the bands own means and is destined to grab them world attention for its fine thrash/metal sounds.

Juggernaut is certainly not the most original thrash album made in that it does not have any break through or distinctly new things to bring to the ear but it is so wonderfully full on with prime thrash metal aggression that ignites the senses it is easily one of the most rewarding releases this year. It is dynamic, mischievous and a deeply appetising powerful explosion of fluid and invigorating aggressive riffs and magnetic cutting steely melodies that go deep far beyond the ear. There is no pretence from Degradation on their release; it is simply a nonstop giving of proud and honest rock ‘n’ roll.

Sound wise the band’s music has very visible influences from and touches of the likes of Testament, Exodus and of course Metallica, but they also explode with the violence of a Slayer to create their own maybe not unique but distinct sound. Opening track ‘A Necessary Evil’ slams right into the ear from its opening riffs. Forceful with high energy and eagerness it rumbles and grumbles pleasingly. The guitars are fluid and undemanding whilst the bass of Holy is a deep and satisfying tease. Vocally Manske recalls James Hetfield without truly sounding like him which is a bit of a puzzle but adds to a strong song.

From here on in things really pick up. The title track packs in incessant pummelling riffs and a cascade of tumbling rhythms to inflame the heart. The track is a pulsating intense continual stomp upon the ear spiced with great creative guitar from Manske and Hartman countered by the unforgiving drums of J. Manske. This leads into a trio of excellent tracks that really show Degradation are a fine and formidable band.

‘The Reckoning’ is playful yet direct and hard and shows the bands excellent individual skills off clearly and that they as a band are extremely tight and accomplished. ‘Rise To Fall’ and ‘Trail of Sin’ carry on the quality and energetic high paced attack. Never taking a step back the band thrust and thrash into the ear and beyond to feed and pleasure all the senses. The first song is a no frills but all thrills meaty shredding feast whilst the latter of the two attaches itself with a raw hardcore punk tone to sound like a mix between Testament and Biohazard.

There is simply no weakness across the album though their cover of The Crown’s ‘Executioner… Slayer of the Light’, great though it is does not have the vibrancy and undeniable fresh eagerness heard elsewhere on Juggernaut.  The album though is a nonstop trash/metal slab of deep pleasure.  Degradation may not be bringing something to leave your jaw on the floor but with Juggernaut they have gifted the year with a release that ticks all the boxes and treats the heart. 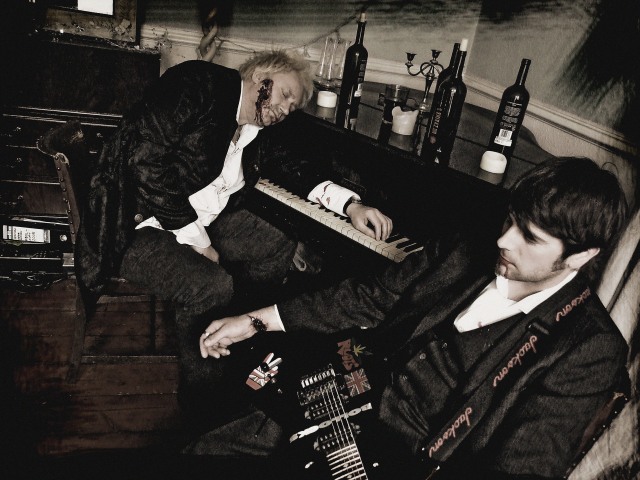 The debut album Stab Me from UK blackened doomsters Legions of Crows is a gnarly vindictive release that walks the fine line between appalling the senses and lighting them up with unconventional and deliberately challenging intrusions. Even after numerous listens one does not know whether to consign it to the moving on or the lay back and let it violate again and again folder. For all the release’s disjointed caustically seemingly nonviable sounds and ideas it is deeply mesmeric though not always with a clear distinction why.

Coming from Salisbury Legions of Crows consists of Attila (vocals, keyboards, programming), joined on the CD by Herod (guitars, bass) and Jon “The Revelator” Maple (spoken word, vocals). Despite the demo in 2009 Cacophonous Aural Wickedness the band is still relatively unknown though it grabbed enough attention to fuel a link up with Funeral Rain Records for their debut album’s release.

Legions of Crows is a venomous release, the band’s uncompromising hatred, disgust, and nihilistic opinion on everything from religion and politics to conforming to an oppressive life and its directors, dripping with caustic intensity throughout. The intent and vehemence disruptively provocative from the band and as challenging and consuming as their crushing black sounds. As the eight tracks do their worst one feels like they are being judged and punished whilst at the same time having every sense fed with unexpected but addictive creativity, like the worst hypnotic horror no matter how you try you cannot turn away or really want to. 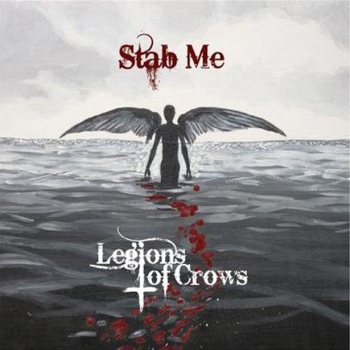 The album is book ended by two tracks that evolve from church like ‘innocence’ into blackened malevolence. The opener ‘Provident Hymn-Malediction’ starts with church bells and a chilly atmosphere to bring forth a hymn which is soon consumed by a heavy ominous doom fuelled sound and threatening riffs. When the two merge further along it is a disconcerting but hypnotic effect. Alongside the clean choir vocals the wizened crone like vocals of Atilla spit venom and despise to ensure no moral comfort will be freely given. Closing track ‘Coventry Carol’ has a similar start, a church organ announcing and accompanying the blackened aural monstrosity devouring all senses. The track then turns into another hymn like doom dirge with the guest vocals of Paul Di’Anno (Iron Maiden, Battlezone) leading the way with the venomous tones of Attila in the background alongside a wonderful choir like backing from Tracey Benecke, the contrast between all and the punishing sounds extremely agreeable.

In between the other tracks are threatening, distorted and doom metal at its more ingenious. Though the sounds on the surface do not immediately stand out from those found elsewhere it is with the delving into a tracks depth and focusing on the creative use and placing of unexpected and unpredictable elements that make the release a more eager proposition. At times tracks such as ‘Legions Of Crows’ with its electronic taunts , ‘Carrion Pond Drove’ and its disturbed filthy beauty and carnal like bestiality, and ‘Bullshit Acres’ intrigue and experiment with the senses as they twist them inside out with slowly crushing riffs and melodies from the blackest abyss. The latter is a formidable march of deliberate antagonistic intensity and probing brutality and easily the best track on the album.

Whether Stab Me will bring Legions of Crows to a much wider recognition it is hard to tell as the album will certainly put off as many as it draws into its black tapestries. It needs work to listen to and many are never prepared to go deeper to explore and welcome the expressions and borderline indulgences bands like Legions Of Crows bring forth. Stab Me is far from being an album of the year choice and still leaves one undecided but it does invite regular continued assessment.