United Highs – Talk About Us

Talk About Us, the new single from indie rock band United Highs, is as smooth and flavoursome as Cornish ice-cream, and just as easy to grow a keen appetite for. The band itself is also Cornwall bred with a sound which is not seemingly as worried about sculpting its own distinctive character yet as it is in providing a great time for band and listener. It is an intent successfully fulfilled by Talk About Us, one of those songs which just linger to please and entice long after physically has leaving the building. 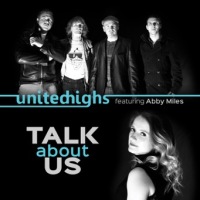 United Highs is the creation of Falmouth hailing brothers Luke and Kristian Good, the sons of one of Cornwall’s most respected guitarists, the late Rod Good. Once they began experimenting with musical ideas and it became obvious that the guitar was “in the DNA” of Luke and vocalist Kristian had the flare for words, the pair and band’s musical journey was in motion. Drummer Ben Nankervis was brought into the creative fold after he came to the rescue of one of the band’s show at London’s Half Moon which was under threat due to illness. Soon recruited full-time, he was soon recording the United High’s debut album Over the Influence with the band at the legendary Sawmills Studios in Cornwall. The current line-up was completed when bassist/backing vocalist Ian Henderson joined the band, his CV at that point already including session work with Bad Company, a tour with Twisted Sister, and work with the likes of Steve Marriott and Larry Wallis as well as a host of former bands including Panik, The Love Affair, and Turbo.

Also recorded at Sawmills Studios, Talk About Us is the band’s new temptation and features the guest vocals of Abby Miles. Originally asked to provide backing vocals on the song after being heard singing at a party, Abby’s contribution is a far more potent aspect to the lively encounter than just that, her part evolving as the song grew as it was recorded to become a full union between guest and band.

The single quickly grips ears with heady beats and a dose of riffs not too far removed from the punkish air of early Sex Pistols offerings. The song soon blossoms a melodic and dramatic nature though, guitars casting a spicy web which the strong tones of Kristian and subsequently Abby harmonically explore with their swiftly riveting union.

There is something familiar to the song, different aspects hinting at an array of bands yet combining for an easy persuasion that, as suggested earlier, hangs around teasing and tempting thoughts and emotions, especially through the fiery chorus and outstanding blend of vocals which often come in waves to seduce ears.

Talk About Us is one of those songs which may not become a personal classic but we would suggest a proposition which will persistently put a smile on the face every time it steps forward, whilst United Highs is a band we should all go checkout a little closer, Abby Miles too after this.

Talk About Us is available now via the band’s Bandcamp page as a “pay what you like” download.