Very different in flavour and sound but both a rousing pleasure in these dark times we have a couple of singles you should be checking out; the offerings of Feed The Wolf and The Winachi Tribe two pleasure sparking distractions.

It may be only one song but there is no escaping the intimation that there is a touch of fun and mischief to the Feed The Wolf sound. As debut single Intrusion reveals, there is also a creative prowess and rock ‘n’ roll instinct to its dextrous tempting which has quickly inspired the want to keep a keen eye on the UK outfit ahead.

Formed by vocalist Marina and guitarist James, London based Feed the Wolf emerged in 2018 and has gone through an exploration of sound and changes of band members before arriving at the creative voice and line-up behind Intrusion. Their sound is tagged as dirty rock ‘n’ roll but with its potent blues inspired groove and punk rock edge, going by the first single, it is a richly flavoured proposition already nurturing its own identity.

With Theo on bass and drummer Steve completing the line-up, the band instantly hit ears with an appetite entwining groove; its virulent infection an inescapable hook to which rhythms add their thick bait as the enjoyably wild child vocals of Marina bring that great punkish devilry.

Theo’s bass delivers a delicious dark grumble to the song, especially providing a devilish lure as Marina’s voice embraces a relative calm deep into the magnetic encounter as all the while that bluesy groove  tightened its grip on eager attention.

It is indeed only one track but more than enough to spark real anticipation for what comes next.

The Winachi Tribe are no strangers to the site, a pleasure bringing presence which will only continue with more releases like Funky But Chic.

The song has been released in collaboration with iconic Italian fashion brand Pantofola d’Oro and the release of the Pantofola d’Oro – Winachi Collection Trainers. It is a fresh slice of the 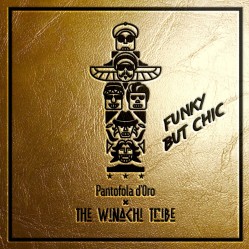 band’s inimitable electro funk bred sound and a track which will certainly give the shoes a boisterous workout on the dance-floor.

The Warrington hailing quintet of Liam Croker, Antony Egerton, Inder Goldfinger, Richie Rich, Jamie Mcgregor, and Mr Whommit  instantly gripped the body with the song’s animated funk, its energy controlled but inescapable as vocals charmed ears within the just as lively embrace of keys and guitars. With rhythms an even more boisterous manipulation, the song swiftly had us swerving to its swing and roaring with a chorus which is as virulent as the current invader upon the world.

With drama lining its twists and turns as temptation oozes, the song is Winachi Tribe irresistibility at its prime, a song to give your bodies and spirit an exuberant workout in this time of self isolation.

Both Intrusion and Funky But Chic are out now.