Phoxjaw – A Playground For Sad Adults 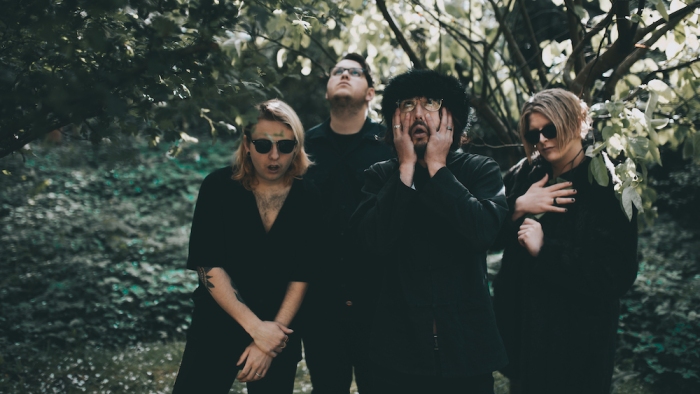 We are not sure what it is in the River Avon and water supply of Bristol but the city is one of our favourite and persistently fruitful sources of musical invention and ear grabbing artists. It has provided a lengthy list of striking propositions over recent years alone to which Phoxjaw has added their creative name. The band has just uncaged their second EP, A Playground For Sad Adults; a collection of tracks which are as dramatic and unpredictable as they are feverishly contagious.

Phoxjaw have a sound which rebelliously defies pinning down especially within A Playground For Sad Adults. It is alternative rock bred to give it a base which made for an appealing lure in the band’s last EP, Goodbye Dinosaur… released last November. Within its successor though, it has evolved into a whole fresh and bold proposition of flavour and imagination which firmly puts the band’s first EP as well as a great many releases this year in the shade.

Released through Hassle Records, A Playground For Sad Adults opens with the brief lure of its title track; the piece sepia toned coaxing which inspired intrigue alongside trepidation as to what lurked ahead. What was waiting was one of the best tracks heard, Melt, You’re A Face Of Wax emerging from the raw shadows of its predecessor with an immediately enticing melodic strand of guitar within calm but suggestively imposing beats. Quickly the web spun by guitarists Josh Gallop and Alexander Share wraps the imagination, the bass of vocalist Danny Garland prowling the already instinctively catchy and increasingly richer and bolder incitement. A momentary calm surrounds the opening moments of the latter’s magnetic voice, the beats of Kieran Gallop still a crisp encouragement as guitar wires share their temptation. Crescendos of drama and creative theatre only add to the rousing character and a soon eager appetite for the song’s animated adventure.

The track is superb and never matched but certainly rivalled by things to come starting with Monday Man. It too took barely a breath to grip appetite and attention, bass and drums united in delicious bait before guitars sprung their own virulent enticement. In no time a pop rock energy and catchiness floods the expanding encounter, Garland’s vocals leading the tempting with zeal as melodic and sonic invention collude in equally magnetic persuasion. By the second greater urgency and dissonance emerges, firing up the roar and intensity of the song but never lessening the pull of its contagion before Whale, Whale, Whale brings its own catchy wiring and ravenous appetite to the release. Instantly a ferocious intent accompanies the senses shaking surge of incitement, a nagging groove taunting and enslaving ears within the turbulence of sound and emotion. It is a tempest though which breaks for melodic intervention and emotional reassurance but ultimately stalks and harries pleasure into inescapable subservience.

Bodiesinthewall casts another slice of unique drama within the EP, its initial presence a shadow clad and portentous calm from which a poppy stroll and mischievously catchy seduction eagerly springs. Like a blend of Maximo Park and Fatima Mansions, the song was craftily under the skin in no time and manipulating participation with just as much relish right up to the nightmarish expulsion of all its fears and discord, though that too only leads to another contrasting climate, this time a carousel of melodic and vocal enchantment.

Bringing the release to a stirring close, The Curse Of The Button Man is a cinematic yet intimately stirring slice of creative imagination. As its predecessors, the song is a cauldron of flavours and hues which defy precise labelling whilst providing a drama and experience which eagerly lingers in thought and appetite. Dark and intimidating, predacious and relentlessly infectious it is a glorious nightmare bringing a stunning release to a mighty close.

Phoxjaw gave numerous reasons to keep a close ear upon them with that first EP but a suggestion which has now become a rabid demand through A Playground For Sad Adults, one of the year’s most compelling and thrilling moments.

A Playground For Sad Adults is out now via Hassle Records; available @ https://phoxjaw.bandcamp.com/album/a-playground-for-sad-adults