Home › Music › Album › The Kreoles – Next Stop, The Madness

The Kreoles – Next Stop, The Madness

Rock ‘n’ roll obviously comes in numerous shapes and hollers and for us it is when that kind of diversity finds a home within one single encounter that we find the strongest fascination. The sound and new album of Italian outfit The Kreoles is one such proposition; an encounter bred upon a fusion of varied rock and metal flavours with a healthy punk ‘n’ roll roar for extra goodness.

Next Stop, The Madness is the third album from the Como based band which was founded by producer, songwriter and guitarist Ivan McSimon in 2011 and originally was a quartet with female vocalist Valentina Merlo. With a pair of well-received albums in the 2014 released Touch The Sun (Valery Records) and two years later Psycho (Sliptrick Records), the band revealed the potent sound which has only become more individual to The Kreoles ever since. 2017 saw the foursome reduced with Merlo leaving and McSimon adding vocal duties to his prowess within the band and as McSimon subsequently began working on the new album alone, he brought in bassist NIc Angileri and drummer David Cuomo to complete the line-up with no doubt their backgrounds in numerous styles adding to the rich mix within Next Stop, The Madness.

With Jeff Waters from Annihilator additionally providing a host of solos across its tracks, the album swiftly had ears seriously attentive with opener Shiver. A swirling melodic flume escapes a guitar straight away, rising eagerly from within the wall of sound carrying it. As quickly the song twists into its rock ‘n’ roll stride, riffs and rhythms almost stalking the listener as McSimon’s vocals stroll their tempting. Already the band’s sound sets down its individual character though there is an essence which reminds of Russian rockers Biting Elbow to the song and indeed many of its companions. Equally the track revels in heavy metal and progressive rock attributes; every second one of simple captivation as the song sets the album off in fine style. 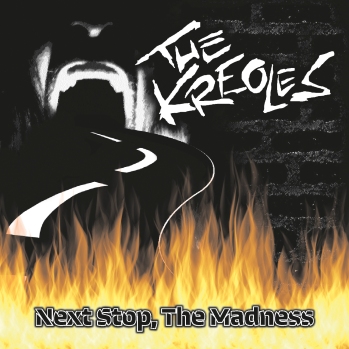 Day After Day follows, bursting from the speakers with relish as swinging rhythms collude with sonic and melodic tenacity. Its spirit and energy never dips across another stretch of alluring enterprise, McSimon steering the adventure in voice and craft, and even in the moment of relative calm there is a vigour which prevails. With a solo which just beguiled, the ear gripping track makes way for the equally magnetic It’s Time to Go, a song with a dark lining to its drama and melodic intimacy to its creative narrative. As within its predecessors, keys add another compelling and tantalising ingredient to keenly devour.

Both Deep Inside with its robust dynamics and infectious intricacies and the more classic rock/metal bred Take Off hold ears and appetite firm, each a host of catchy and at times voracious enterprise while All Alone savours its metal breeding from its first breath as again classic hues unite with fresh textures and a punk infused ferocity. All three add their own independent imaginations and personalities to the album, the steely web of the last especially striking before We Make the History shares its potent balladry.

The album’s title track follows on an enthusiastic canter, once more the band aligning metal threads to a hard rock styled canvas to effortlessly ensnare attention. Though some tracks roused the passions more than others, every song within Next Stop, The Madness left a pleasure sparking mark, this one no less than any other with its multi-flavoured roar.

The album concludes with firstly the imaginative and stylish thunder of You Can Be Sure and lastly the bold rock ‘n’ roll of The Rain. Neither song quite sparked the ardour of many before them but each left a lingering mark and rich satisfaction which only drew ears keenly back.

Next Stop, The Madness certainly pleased straight away but it is with plays and time as more of its tapestry of melodic colours and varied flavoured textures came forward that it really impressed. So quite simply, The Kreoles is one of those bands which, as indeed their new release, should definitely be checked out.

Next Stop, The Madness is out now via Sliptrick Records across most stores and @ https://www.thekreoles.com/shop/