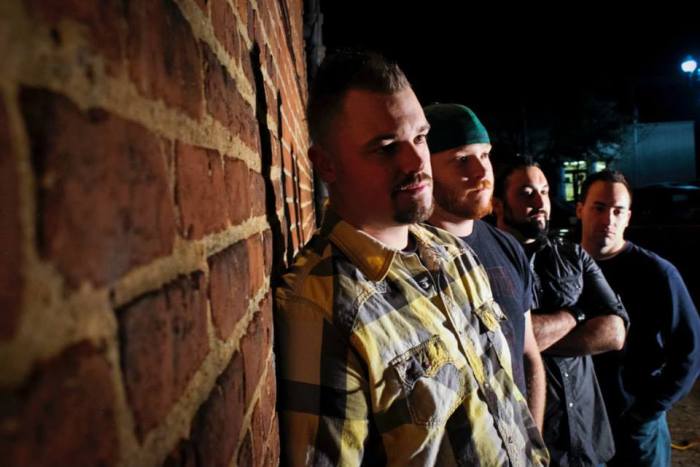 Rising from the ashes of rock band Damsel Down, one of the best US underground secrets, North Carolina quartet Triton has subsequently been faced with strong expectations but on the evidence of debut release First Orbit, have simply taken it all in their impressive stride. The seven-track EP provides a potent and rigorously engaging proposition of melodic rock with a hint of Americana as well as a whisper of more muscular elements. It is an encounter to feed ears and emotions rewardingly and spark the imagination with open potential and quality; maybe not a release to open new avenues for rock but certainly one to give it a very healthy colour.

The demise of Damsel Down last year with the departure of vocalist Dave Burke left many intrigued as to what would happen next. With bassist Darrin Craft unwilling to commit to a brand new project after it was clear the band would not be able to continue, remaining members in drummer Jim Clardy and guitarist Kyle Spidel set about starting afresh. First to join them was long-time friend and bassist Andy Allen who subsequently brought along vocalist Chris Rich. Originally meant to be a stop-gap link-up until a permanent vocalist could be found, Rich stepped into those shoes impressively to grab that full-time position. The Concord band was now ready to emerge which it did with attention grabbing songs and now through First Orbit. Recorded last year it is a striking debut to not exactly set the world on fire but sure to make Triton a name to keep a close eye and ear on.

The release opens with the outstanding One, a track which from its first tantalising bass and guitar notes is crawling into the imagination to light instant attention and appetite. The song is almost teasing senses with its intrigue before

broadening its expanse and reach with a blaze of melodic enterprise and rhythmic enticement. Holding a sturdy and commanding stride, the track partly intimidates and partly seduces in sound and intent, its metal seeded groove and the impressive voice of Rich bringing extra captivation to bear on keen emotions rising to embrace the song. With hints of bands like Seether and Poets Of The Fall to its body, the track dominates with confidence and creative flair.

The following Every Way similarly has a potent gait and presence, punchy rhythms and a throaty bassline instant lures to take hold of. Though less dramatic as its predecessor, riffs cast an appealing web whilst the growl bred in the music and Rich’s voice offers another rich hue to the sound and songwriting of the band. Though subtler than with some bands, there is infectiousness to the song which crawls under the skin and lingers. The track is an imposingly enticing encounter which has thoughts and emotions bound in its sinew built charm with ease before making way for Live Free or Die. Opening with sounds of war, the track bears down with a swing to its gait and contagion to its rhythmic bait. Like the last song there is an instinctive snarl which caresses every aspect of the song, its caustic riffs and fiery enterprise right through to the anthemic beats of Clardy and those again impressing vocals. It is a blaze of thrilling rock ‘n’ roll, as suggested not the most ground-breaking but a track which leaves a real hunger for more.

Real Bottom comes next to change the air of the release slightly, it’s slower yet no less imposing presence an emotive and passion fuelled reflection which enthrals thoughts and ears. Excellent group harmonies add extra potent spice, though the dark toned voice which seems to enter most tracks does not work as it does say on the first trio of songs and should have been forgotten as it distracts too much from what is a great song. Nevertheless the track shows the strength of the band as does Broken Souls, a power ballad which just grows and grows over time. As the last song it misses the heights of the first few tracks, but engages relentlessly as its smouldering presence blossoms with a slow burning surety over each play.

Warrior Stare has no problems making a powerful first impression; it’s almost predacious challenging of ears with forceful rhythms and antagonistic riffs as irresistible as it is intimidating. Again the lone heavy throated voice frustrates but cannot defuse what is an insatiably gripping song with a great flame of enterprise from Spidel, the ever enslaving beats of Clardy, and the masterful vocals and bass temptation of Rich and Allen. The track lights up body and imagination riotously before leaving for the evocative caress of closing ballad If They Only Said, to bring the encounter to an enjoyable close. It is not the strongest song on the EP but easy to constantly devour as Triton show the depth of their creativity and again the enthralling voice of Rich.

First Orbit is a masterful introduction drawing on the experiences and already honed skills of its members for a strikingly accomplished and magnetically riveting, not forgetting thrilling adventure. Listening to the EP it is hard not to feel that Triton will outshine and find a much larger spotlight than some of its member’s previous endeavour.

Like Loading...
‹ The essence of greatness: an interview with Franky De Smet Van Damme of Channel Zero
The Old-timers – Be Reconciled ›