Bringing a fire and fiercely textured depth rarely heard before in shoegaze, Chicago quintet Lightfoils release debut album Hierarchy to mesmerise, subdue, and inflame the senses. Like a voracious mix of The Capsules and The Mouth of Ghosts but openly individual, the band’s sound and release is a breath-taking wind of poetic invasiveness, an adventure of sultry landscapes within a hazy swamp of emotive and smoulderingly intensive melodic skies. There are times that the release truly imposes on ears and psyche but from start to finish the album is a compelling and fascination blaze of cavernous warm sounds and shimmering transfixing ingenuity.

Consisting of vocalist Jane Zabeth, guitarists Neil Yodnane and Zeeshan Abbasi, bassist Cory Osborne, and drummer John Rungger, Lightfoils emerged in 2010. Since their first steps the band has shared stages with the likes of Ringo Deathstarr, Telescopes, Nightmare Air, and Ume as well as playing at SXSW in 2012, all the time increasing their presence and growing fan base. Their self-titled EP of two years ago set attention and anticipation in motion which the Sanford Parker album is set to take to new levels and intensity such its impressive proposition.

An atmospheric caress wraps ears first as opener Polar Waves emerges to set the album off, its soft yet haunting touch soon joined by jabbing beats and a broody bass tone alongside a web of jangling guitar and angelically 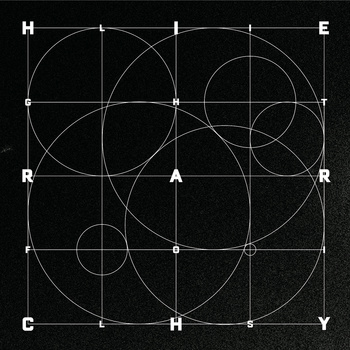 harmonious vocals. It is a rich and enveloping mix which croons as it immerses the imagination into its presence, soaking ears and emotions in a melodically humid flight of endearing enterprise. It is also a merger of light and shadows, the rhythms and bass bringing darker depths to the slightly chilling yet captivating voice of the song cast by heated guitars and vocals. It is a striking and mesmeric start to the encounter but soon finding itself in the shade of its successor.

Last One is a killer of a song, from its first rhythmic anthemic tantalising swiftly joined by the rugged charm of raw guitar and the seemingly persistently cantankerous bass tones, it dances with the passions. Keys as in the first soar across ears and the ceiling of the song but spread a more expansive and potent emotive soundscape here beneath which there is a primal energy and irresistible bait enslaving thoughts. Adding a slight post punk steel to the canvas of temptation, predominantly through the bass of Osbourne, and a distinct flame of abrasing sonic colouring to the flaming climate, the track is a mouth-watering and thrilling wash of invention led by the siren-esque call and harmonies of Zabeth.

Those same mesmeric temptations permeate the dynamic emprise of Addict, a track which stirs the blood from the outset with its scorching sonic welcome and subsequent anthemic stride aligned to a bewitching weave of aggravated sinews and sweltering enchantments. The track boils with contagious intensity and squalling hues throughout, igniting ears through to emotions with its rigorously expressive, almost antagonistic heart and abrasing crystalline beauty.

Diastolic similarly grips attention and a by now raging appetite for the album, its first coaxing of that constantly delicious and grizzling bass tempting binding a concentrated focus. It is a lure aided just as rivetingly by guitar and crisps rhythms. The spine of rhythmic invention and contagion across the whole of the album is simply irresistible, the dark spicing a perfect temper and complement for the flowing summery vocals and steamy melodies swirling overhead. The track is like a passionately orchestrated sunset, its rich hues and intriguing sonic scenery a shifting enthralling composition which embraces and seduces the whole body.

The following Mock Sun is a more laboured persuasion, a song which superbly blends the darker ravages of sound with smothering blazes of aural sun and seductive melodies but loses the key to the passions which previous tracks held so forcibly. Its central snarl though ensures the track leaves satisfaction full and the voice of Zabeth in control of emotions before making way for the excellent Passage. The track glides effortlessly across the senses, a glaze of House Of love and My Bloody Valentine stroking ears before a fiery swell of endeavour and energy brews in its belly. The song is a lingering seduction, its melodic lips searching and glancing over every inch of the senses and imagination like a celestial lover spawned from a darker corner of temptation. One of the pinnacles of the release, the track gloriously sends emotions into rapture before an untitled instrumental comes in to treat the imagination. The piece is a spatial soar with heavenly whispers and pulsating tones but seems out of place certainly where it is on the album. As an intro or outro it would have been an embracing to dive within but where it is truthfully you are just looking to the next track.

Next up alovetodestroy seeps from its predecessor with an echoing swarm of sound which in turn triggers a feisty expulsion of grippingly aggravated rhythms and icy bass taunting around which Zabeth and guitars sculpt another sizzling romance fuelled further by the evocatively potent keys. The song is as busy and lively as it is rigorously beguiling, heating up the senses for Hideaway to cast its wily melodies and alluring charm over. A gentler floating of spiritual aural seducing compared to the previous track, the song engulfs the listener in a bordering on tempestuous atmosphere which you only want to bask in.

Completed by another nameless piece of skilful composing and vivid realisation and as the previous piece against the other tracks less compelling even with its cinematic quality, Hierarchy is a cosmic and reflective fantasy brought to rich aural life. Lightfoils has crafted an immersive escape within which you can find hope, shadows, and unbridled pleasure.