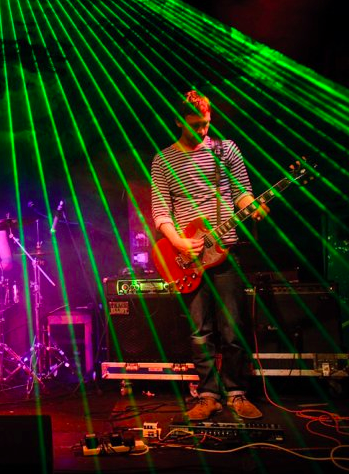 From the release of his debut single I’m Gonna Be A Witch earlier this year, UK multi-instrumentalist Sam Thomas continues to impress and mark himself as one of the most potent and exciting new talents to emerge lately. Third single Internal Ether is the next instalment of his impressive arrival on the British rock scene, a track which makes a compelling declaration of craft and enterprise within an absorbing provocative sonic narrative.

Thomas composes with the influence of slow-building classical inspirations which draped his growing up alongside The Beatles and Beach Boys, in a union with the rock sounds he discovered later in life, the likes of Pink Floyd, Led Zeppelin and Guns ‘n’ Roses flavouring his unique invention and exploration. The result is a passion fuelled post-rock sound aligned to soft pastoral calms, a merger which instantly impressed on his first single and continues to on Internal Ether. The successor to Gift and taken from his impressive debut album Blind Theatre, the new single is an absorbing adventure which sparks the imagination and feed the emotions with ease.

Opening within a gentle and seductive guitar sculpted embrace, the track is soon casting its provocatively hued painting over thoughts. With potently enticing strings adding their emotive touch to the emerging canvas alongside a guitar which strokes and inspires the imagination into self-reflection and inventive interpretation, the song swells in stature as it progresses. There is also a brewing passion and intensity which fills every corner and aspect of the song, a force which is always held in check but allowed to express its full voice as the track works towards its closing sonic tempest. The vocal samples within the encounter do not quite work as well or as richly as the music but certainly have no ill effect upon the quality and strength of the piece.

The single is completed by a remix of Internal Ether from Opdot, the duo of Tim Laverack and Gavin Kirtley who are Just Music label mates of Thomas. Their version impressively manages to steer the track into another riveting direction without losing the sentiment and heart of the song. It is a pleasing and resourceful take which stands side by side with its source for equal effect and success.

Sam Thomas continues to prove he is an artist it would be foolish to take eyes and ears off of; to miss every step of his ascent a deprivation for the senses and imagination which would be very regrettable as he surely moves on to even greater things and plateaus ahead.