Perversion – Pillars of the Enlightened

Formed in 2006 and hailing from Dubai, United Arab Emirates, death metallers Perversion are now ready to wake up a greater awareness for their intensive sound with the help of Blast Head Records. Debut album Pillars of the Enlightened was first self-released last year and brought stronger attention on the trio but now with N. American poised to be consumed through the Canadian label, things are stirring for one of the few if only death metal act in the U.A.E.

Originally a quartet, Perversion goes for the jugular with unbridled and unpolluted death metal. It is a sound which holds no surprises yet has a devious intrigue which pulls you back into its clutches time and time again. The release of their first EP The Origins of Horror in 2008 made them a potent force in the local scene as did their live shows, if further afield they understandably were an undiscovered scourge. Consisting of founders Mahmud Gecekusu (ex – Nephelium) and Rhama Al Rhama alongside Alex Micklewright, the band is poised to welcome greater recognition and concerted focus with their powerful and deeply satisfying full length introduction as they build on successful appearances with the likes of Hate Eternal and Grave as well as at festivals alongside bands such as Suffocation, Vader, Origin and Exodus.

The short impressively executed intro/instrumental Through the Void begins the album’s aural tale, its dramatic and epically carved 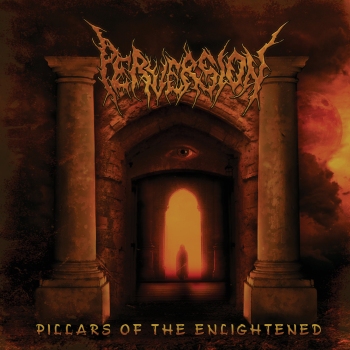 walls a potent beckoning into the heart of the album and next up Aging the Unbirthed. The second track makes a sure and forceful start if without showing its full strength and muscle. Soon into its stride though the band captures the imagination with a heavy blaze of intensive riffing from the guitar of Gecekusu and a barrage of predatory rhythms conjured and unleashed by Micklewright alongside vocals from bassist Rhama which hold an almost expected but accomplished guttural squall of malevolence,. It is a mighty start and if not ground breaking leaves an open appetite for more.

That hunger is soon appeased by The Great Deception and the title track, both continuing the intense stance and spite of the album in individual yet connected ways. The first offers tight expressive grooves and sonic flames within its stringent savagery to twist things a little further within Pillars of the Enlightened, whilst its successor just chews up the ear with carnally bred expanses of debilitating rhythms and carnivorous riffs. Already there is a similarity forming certainly across the surface of songs which the next up excellent Subconscious Mutation does little to dispute even in its glory, and if anything that is the biggest down on the release. That is not to say each track does not have its own facets and lures but a more determined delving into the depths of songs is often needed to find a memorable lingering mark distinct from the others.

Both Gates of the Multiverse and The Origins of Horror tease and taunt thoughts and senses with style and presence, the first through winding grinding grooves which work their way through to the psyche and wrap searing tendrils around their capture whilst its thrilling companion is deceptively insidious in its climb over and consumption of the senses, riffs and sonic weaves a tempest which shadow the lethal intent at work from bass and drums.

The pleasing Ones of the Beyond starts the closing of the album with a strong similarity to The Origins of Horror, though again a detailed watch reveals more than first assumed, and is then pushed aside by the thrash led rampage of Dementia (Of Devourment). Like a pack of ravenous wolves the song snarls and clamps its feisty jaws on the listener throwing and pulling them through an eventful fire of destructive and malicious intent.

It is an exciting end to a strong and pleasing album. Pillars of the Enlightened certainly is not attempting to set boundaries or reinvent anything within the genre but instead Perversion has created an album which feeds and satisfies all the wants you could have in a straight up death metal beast. Greater adventures you feel will come with the band ahead but right now they have laid down a very decent no frills slab of metal.