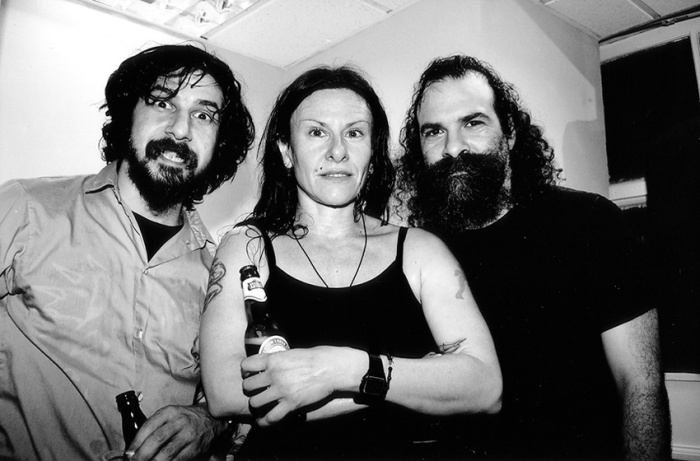 US instrumental rock band Stinking Lizaveta have returned with an album in 7th Direction, which is arguably the best instrumental release in a very long time and is easily one of the best albums to be unleashed this year if not the very best. It is magnificent, a masterful vision of imagination, artistry, and storytelling. It is a collection of pieces which tell tales, but your tales, the band offering all the tools and emotions along with an irresistible invitation to write your own script, 7th Direction the perfect vibrant and inciteful canvas of sound and evocation to individual visions.

This their seventh album, follows on from the acclaimed Sacrifice and Bliss of 2009, though all their releases since forming in 1994 have generated an eagerly growing respect and following. Formed by then partners, guitarist Yanni Papadopoulos and drummer Cheshire Agusta, in the basements of West Philadelphia, the pair soon enlisted Alexi, the brother of Yanni, on upright electric bass. Together the trio have created, conjured, spawn, call it what you will such the uniqueness of their sound, a mesmeric and provocative blend of rock, fusing everything from classic, stoner and punk rock to jazz, progressive rock, heavy metal, and so much more. The years have seen them sharing stages with bands such as Corrosion of Conformity, Clutch, Rollins Band, Fugazi, Zeni Geva, Today Is The Day, Weedeater, Hidden Hand, Don Vito, Antikaroshi, End of Level Boss, and Beehoover with each undoubtedly being given a run for their money.

7th Direction is an album which takes infectiousness into addiction status and plays thoughts and emotions like a harp,

gently provoking and stroking but at times twanging them for near orgasmic responses. The band writes music which is so fluid it feels like it is simply on the spur of the moment composing, the tracks organic and instinctive as they tease and ignite total captivation. They are also perfectly formed, compact or expansive when the time is right without any unnecessary flamboyance or indulgence at any point. Each song has a facet which is sirenesque whether the flaming guitar invention of Yanni, the heart firing bass strokes of Alexi, or the minimal yet expressive and relentless rhythms of Cheshire, though generally it is all three at the same time, their union a delicious and stirring feast to devour greedily.

Stinking Lizaveta open the release with the title track and immediately has the passions swelling with its thumping build to an opening crescendo…which is basically the whole song though they repeat the climb a few times to get the juices flowing first. In to its stride or rather emotive sci-fi/noir stroll, the track pulsates with a melodic shimmering which blisters the air on touch alongside the watching basslines and cagey rhythms. It is stunning, a thing of beauty speared with burning flashes of impassioned guitar and tension raising climbs once again.

From the opener alone one would be shouting from the rooftops about the release but this is just the beginning and things just sizzle and brand new memories into the mind track by track. The likes of the following View From The Moon, a heated journey through celestial atmospheres, and the evolving Moral Hazard leave one gasping in pleasure and hunger for more. The first transports one to the theme of the title and easily would make the perfect soundtrack to seventies TV shows like Space 1999 or UFO, without diminishing the quality and stature of the piece. The second is a crumbling upon the senses its flight twisting into a schizophrenic squeal through sonic fires.

Every track deserves a mention but the greatest personal highlights come with the kinetic fury of Dark Matter, a song where shadows and incendiary energies crash and burn whilst a dark snarl prowls as overlord, the hypnotic aural puppeteer that is Z which has limbs and feelings dancing a satanic tune, and One To The Head, another track to fire up every one of the senses with its moody bass tones, tingling beats, and electrifying sonics. Oh there is also the unbelievably magnetic Ten Thousand Hours, a piece which beckons and seduces with a kaleidoscope of persuasive melodic caresses, sonic kisses, and rhythmic wonder.

To say 7th Direction is brilliant seems an understatement, the songs mentioned and every one of the six not covered simply ingenuity from the deepest well, it is that good. Stinking Lizaveta show they are still the true heart and leaders of rock n roll and if after this album there are still those unknowing or disbelieving there is no justice in music for sure.