Ourfamous Dead – I Am Human 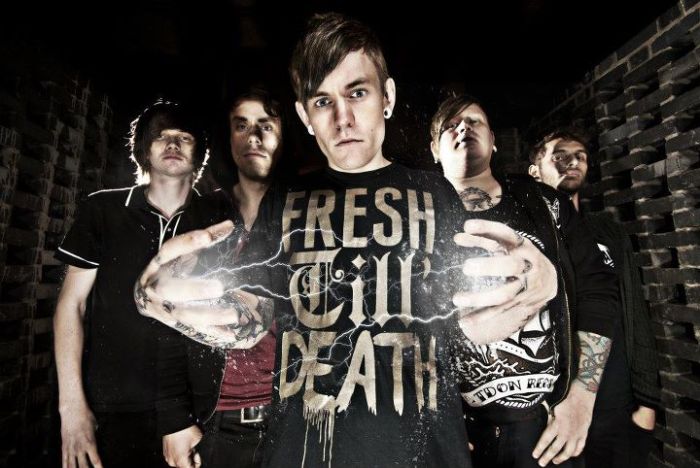 Earlier in the year Leeds electronicore punk band Ourfamous Dead released their single Untitled Part 2 and it was clear from then on they were a band to closely watch and there was a definite keen anticipation for the next offering from the band. The I Am Human EP is the follow up to be released November  14th and brings more of their striking and eager mix of infectious hook fuelled electronic punk sounds, swimming in attitude and irrepressible melodies to excite and engage.

Since their formation in 2009 Ourfamous Dead have worked steadily and intently in defining their sound and laying down foundations with gigs around the UK. Earlier this year they started work on the songs that make up the rippling and exciting I Am Human EP, working to the point where their ever growing following and the rest of the country and beyond can fully immerse in the band’s contagious sound.

The four track EP though not flawless is an impressive and vibrant release showing a band confident in their sound and ability. There is also a good varied mix to the songs in style but also in attack which in some bands might suggest a confusion of direction but with this quintet it comes off as more evidence of their writing skills and assuredness in their music and ideas.

‘Rate My Hate’ opens up the release bursting in with a hardcore attack over pulsating synths that wrap themselves around the ear. Defiant musically and from the shouts of AJ Reeves, the track bristles with attitude and aggression before midway switching to a mellower and softer attack, the vocals of Reeves and drummer Robin “Bobbyo” Speight uniting in a harmonious flow that changes the songs emphasis firmly though the drums and guitars still continue to strike hard. Though it does not detract from the song it feels like it is in two parts that though they work seamlessly are more effective in the angrier thrust of the start.

The opening slow notes of a piano bring ‘Untitled’ into view next but it only takes a few seconds before the track erupts into a great pop punk track showing a different and impressive side to the band. Though not as to the fore as on the opener the synths of Rich Jennings wonderfully play as a support to the driving bass pulse of Simon Green and the striking guitars of Callum “crabcore” Knight. Reminding of the likes of Drive A the song flooded with excited energy straight form their live shows, hits hard and fast. This is the EP’s strongest and most satisfying track.

The third track again changes the approach with a strong blend of expressive and coaxing synths alongside a direct and powerful attack from the rest of the band behind clean melodic vocals and gang chants. The song never takes off fully despite the eagerness of the band but nicely stays with a subdued and full sound.  ‘The Great And Inevitable (Change)‘ is in many ways the strongest song writing wise with its good amalgam of styles all laid in an enticing tapestry of melodic play.

‘Untitled Pt.2‘ completes the package, its swirling synths once more seeking every sense it can to play with. The song mixes in a heavier moment showing the band’s capability to work with aggression as well as sweetly flowing harmonies.

The flaws? Well to be fair flaws is the wrong word it is more down to personal taste. The band lay somewhere between Enter Shikari and My Passion in many ways but it is when they increase the intensity and aggression that they take a distinct step forward. They are far from the likes of The Browning in that way but a harder edge to their music does make the band even more impressive.

I Am Human is a great and thoroughly enjoyable release that is more than agreeable to the ear and shows the immense potential of  Ourfamous Dead for the future.