Following up their successful and acclaimed double album The Chronicles of Sin earlier in the year the hell rock/industrial band Scream Machine return with their new double a-sided single Worlds Collide & Heavy, and what an infectious little soul grasping creature it is. The Chronicles of Sin within its mighty and bulky mass brought forth the ever infectious and dark energy of the band but also sent sparks of new directions and ideas to brew up an intriguing and satisfying mix. The new single takes a further step as the band explores an openly lighter melodic path littered with shadows and evocative darkened essences.

From Washington DC, the husband and wife duo of Sindelle and Cosmo Morte have been challenging and thrilling dark electro/industrial rock hearts through the impressive likes of Electrowitch and Zero to name just two of their provocative albums. Never ones to sink into formulaic familiarity or rest on laurels the pair have opened up a new avenue with the single to inspire a fresh anticipation and eagerness for future creations. Both songs lie somewhere in between recent Scream Machine songs and the solo project of Sindelle, godMONSTER, especially Heavy with its thick enveloping atmosphere.

Worlds Collide opens with a brooding ominous swell of sounds, its electro clasp building the sense of an impending 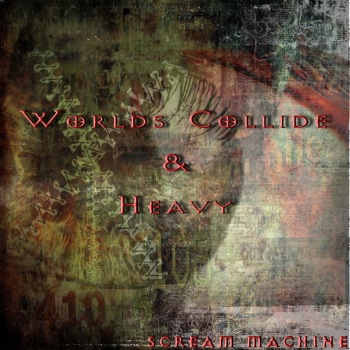 dynamic intervention in sound and premise, two volatile emotional forces set to clash with blistering resonance.  For existing fans to the band the notable thing are the vocals of Sindelle, she has swapped her impressive aggressive and senses antagonising attack for a warm flowing delivery, on both songs she allows her natural singing voice to explore the music and it is strikingly pleasing and impressive. The track is as impactful as anything the band has done before, the new flavouring assisting rather than diminishing the intense consumption and impact the pair always unleash. Worlds Collide boils up the further it progresses to take us aboard the delicious and irresistible yet cataclysmic ride for the relationship within.

The accompanying Heavy blisters the ear with a rain of sonically spawn melodic shards of delight.  There is an almost medieval feel to the sounds, elements the likes of progressive bands  Hawkwind and Horslips would infuse in their music. The song is based in repetition bringing an insatiable siren quality to lyrics and the crawling drone spiced sounds which consume and immerse the ear. A perfect example of infusing light and darkness, Heavy is an ambient cloak for every emotion whether from the brightest skies or deepest pit, a soundtrack to fuel and encapsulate any heart.

Worlds Collide & Heavy is exceptional, a return to the inciteful and imaginative vision they are known for not that they had drifted far from that expected element. The single shows Scream Machine as a band unafraid to stretch themselves and explore their depths and one can only hope the essences unveiled upon the single find a constant place upon their inventive canvas.

The single is a name your price release and a must investigate for all electro/industrial/EBM, melodic…well for everyone. grin We recommend you check out and grab Worlds Collide & Heavy  at http://screammachinedc.bandcamp.com/album/worlds-collide-heavy-single and with a knowing smile and mischievous remind a certain person, told you so.