As much as it is swiftly fascinating, Casuistry from US progressive death metallers Abiotic is a challenging proposition, testing in its ferociously busy landscape with a technical prowess to match, and at times approaching overwhelming ears with that same creative tirade so ears and imagination cannot settle and appreciate what is going in the moment. For all its formidable elements though, the second album from the Miami quintet is one striking and compelling proposal which just gets more impressive and enjoyable with every listen.

Emerging in 2010, Abiotic quickly made their mark on ears with debut EP A Universal Plague the following year, a release laying down a template of ravenous riffs, blistering solos, and technical breakdowns. Grabbing the attention of Metal Blade Records, the band subsequently signed with the label and unleashed debut album Symbiosis in 2012, a proposition pushing sound and skills, as well as invention, on in leaps and bounds. In hindsight though it too was a mere step towards the immense adventure in sound and craft now flooding Casuistry. The band’s voracious live presence has similarly lured acclaim and glowing support across the years, shows with the likes of Dying Fetus and Exhumed reinforcing their growing stature. Last year saw Abiotic link up with producer Jamie King (Between the Buried and Me, Wretched, and The Contortionist) as they set about creating their follow-up album, and a change in line-up which saw new vocalist Travis Bartosek and drummer Brent Phillips join the band, a change which has really added to the impact of the new album and the continuing evolution of Abiotic sound.

Casuistry has growth in every aspect from its striking predecessor, a new maturity and exploration fuelling songwriting to sound, lyrical endeavour to technical resourcefulness. This also applies to the rigorous challenge on the senses and psyche of the listener which will be too much for some, but the rewards as evidenced straight away in opener Believe the Unseen, border on intoxicating at times. From its first breath, the song offers a bestial roar on ears, the throat ripping bellow of Bartosek alone a fierce and gripping incitement matched by hellacious riffs and rhythms. It is a brief savagery though as mere seconds later spiralling melodic enterprise flows from the guitars of Johnathan Matos and Matt Mendez, entangling the predacious bassline of Alex Vazquez and the rugged beats of Phillips in their midst. Within thirty seconds the song is a creative tempest, an unpredictable maelstrom which allows thoughts a glimpse on getting a handle of things before stirring its body and threat up all over again. Thoughts of Trepalium hint away across the track but also as everything turns in on itself and dives into new ideation, the likes of The Faceless and The Contortionist spring up.

It is a stunning start, a disorientating one occasionally even in the briefness of the song, but as mentioned earlier and applying to the whole album, with each listen becomes more coherent in thoughts and thrilling in ears. The same of course applies to the following Reanimated Destruction, which makes a much more merciful entrance, the guitars casting an atmospheric sonic mist as the bass flirts with jazz seeds for its instantly intriguing and exotic tempting. The two almost duelling vocal deliveries work a treat again; guttural and serpentine tones twin insidiousness within the technical and intensity driven raging.

One of the things which definitely add to the songs is the snappiness of their length, no track passing the five minute mark and most falling a lot shorter. This certainly intensifies the bustling character of the tracks inventively and physically, Abiotic wasting no second on repetitive thoughts but it also ensures the testing tracks never come close to be laborious propositions. Cast into the Depths epitomises this next; the song a melodic wine of a sound dripping over ears and soon spreading a weave of sonic imagination as rhythmic hostility intimidates the senses. Phillips is as brutal as he is contagious with his swings and beats whilst the song itself is a cauldron of fiercely bubbling and changing sonic and vocal enmity. Featuring John Gallagher of Dying Fetus, the encounter is a blissfully exhausting endeavour, a description fitting Casuistry perfectly also.

Violent Scriptures is a torrential onslaught of malevolence and craft again, Phillips a beast and Matos with Mendez, mesmeric with their melodies and sonic espionage on the psyche. Vocally too the band has hit another level with Bartosek which has spread to the rest of the album’s throat offered exploits, an aspect ravaging the listener mercilessly in Nightmares of Your Conception next. Grooves once more simply ooze from the sonic animus being uncaged, whilst rhythmically the track is the most vicious yet. The song does not quite match up to its predecessor though, that industrious tsunami proving almost too taxing if still enjoyable at times.

Through the ‘funky’ but rabid The Absence of Purity, which features guest Paul Waggoner of Between the Buried and Me, and Falling into Obscurity, band and album seduce with full steam again. The first is especially virulent with its toxic grooves and sparkling melodic flirtation, swiftly becoming a big favourite whilst its successor arrives drenched in a menacing theatre, noir bred hues colouring its opening torrent of riffs and grooves, proceeding to add rich hues throughout the wiry entanglement of sound and skills. Both tracks leave the imagination and ears ringing and enslaved before Molecular Rematerialization nags and worries their defences with its own flurry of concussive rhythms and citric grooves, all bred in the darkest most venomous corners of the band’s invention.

Casuistry is brought to a close by the transfixing and punishing Drain. Deface. Abolish., a final tempest to be seduced and violated by in equal measure. It is a fine end to a great album which only gets stronger and more enthralling with time. Abiotic make you work to explore and unravel their deeply entrenched and wonderfully turbulent imagination, but make the effort, brave their unrelenting creative hunger, and you might just find one of your favourite albums of the year.

Casuistry is out now on Metal Blade Records via http://metalblade.com/abiotic/ 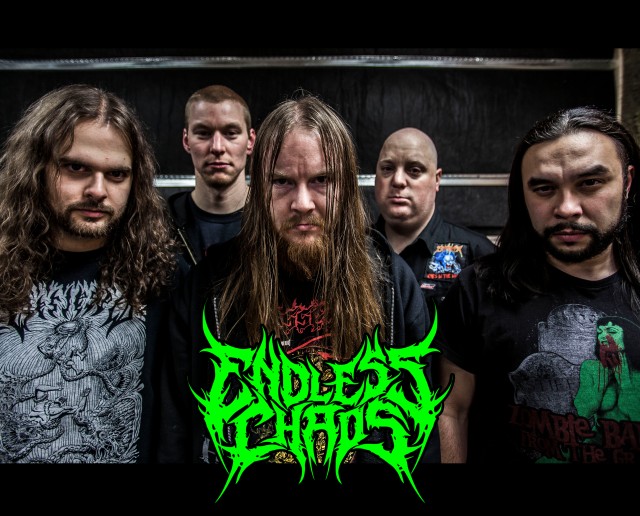 Unveiling their introduction through a three track ravishment which simple devours the senses, Canadian metallers Endless Chaos have announced themselves upon the world in impressive style. Forging an inventively refreshing blend of blackened thrash with death metal, the Winnipeg based quintet take little time raising a greedy appetite for their incendiary sound through the Rejected Atrocity EP. Simultaneously the promise drenched fury also ignites a major anticipation for further things to come from the intensive band, expectations of even greater triumphs a hard to resist thought taking the premise of the outstanding debut from the band.

With a presence and sound which embraces chaos and enterprise in equal depths, Endless Chaos has forged a formidable reputation through their live performances which has seen the band share stages with the likes of Skeletonwitch, 3 Inches of Blood, Wretched, Aborted, Toxic Holocaust, and Kataklysm to great success and acclaim. The next step on their emerging domination of local and further afield metal scenes comes with their first EP, a released inspired by classic horror movie Re-Animator, a film which is definitely akin to the unbridled lust of their creativity. The self-released, Ryan Forsyth produced, Rejected Atrocity is a teaser and taster of things to come from the band, in the words of Jordan Dorge, the EP will “give you the best taste of what’s to come of Endless Chaos,” the vocalist going on to say “When we were writing these songs, we really took in everything we love about death, thrash and black metal and incorporated it into Endless Chaos.”

The title track violates the senses first, rampaging riffs and pummelling rhythms an instant assault. Within the torrent of sonic abuse the guitars of Mike Menza and Mike Toews also unleash a twisting irresistible clutch of grooves and hooks to immediately seduce the imagination, their potent bait a bewitching and similarly lethal distraction from the carnivorous rhythms uncaged by drummer James Burton and bassist Jeff Humarang. It is a breath-taking and riveting web of intrigue and devastation from the opening second, the thrash driven ferocity speared and veined by the some of the richest compelling craft and imagination heard in a long time from a thrash/death tempest. The vocals of Dorge parade a vitriolic squall as intimidating as the sounds and invention at work, his slight variation in delivery enough to leave satisfaction ripe and song enhanced as well as listener blissful.

The scintillating start is soon matched by the following Sacrificial Ritual, it a bestial consumption cored by serpentine vocal malevolence, unpredictable spite, and a maze of ingenious adventure sculpted by the continuing to impress technical craft and vindictive imagination of the band. Like its predecessor, the song is unafraid to launch into unexpected and bold detours whilst the guitars again carve a sonic sculpture which scars and invigorates the senses. The bass of Humarang brings an even throatier predation to the cyclone of malice whilst Burton simply splinters bone and synapse with a continued display of skill and aggression.

The closing Condemned to the Pit drives at the jugular with its thrash bred energy and sinews crushing all before whilst rhythmically the track batters and concusses with hungry rabidity. As with all the songs, the onslaught is only half of the picture. The track reaches its mid-point and seemingly takes a step back to survey the damage, rhythms still plundering and provoking but sonically the song relaxes somewhat. It is a mere moment in time though as the feverish ferocity is soon letting its death/thrash rage and expertise off the reins to bring the unquenchable storm to a staggering close.

The Rejected Atrocity EP is just exceptional, a must have impressive and towering debut to inject real excitement into the world of metal. It sparks, without reserve, the belief that Endless Chaos will be not only a prolifically important joy ahead but one which will help take thrash, death, and metal itself into new mouthwatering realms.