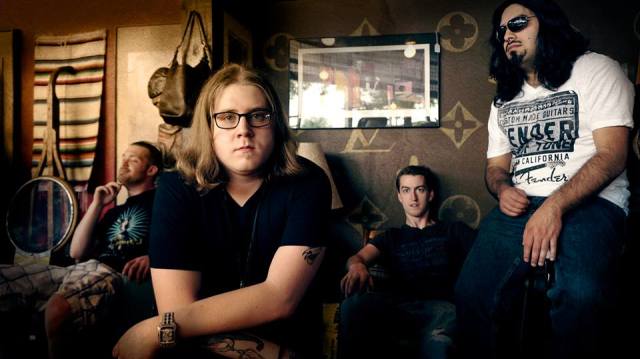 Emotively charged and potently crafted, Words With Action the debut album from US alternative rock band Avenue Army has a confidence and smile upon its evocative lips which only makes the engagement of the sixteen track release stronger. Promise oozes from every song and idea on offer and though the album maybe lacks the originality to thrust it right to the fore of bands emerging within alt and modern melodic metal at the moment, it’s makes a compelling argument in the case of the band becoming a loud inspiring voice in the future.

Hailing from Saint Paul, Minnesota, Avenue Army came together in 2009 after James Paulet and Max Eric Bergstrom moved in together and discovered a strong musical chemistry between them. Already knowing each other through mutual friends and having jammed a few times together previously the pair combined fully at this point to work on songs Bergstrom had awaiting, tracks which did not work out for his previous projects. With inspirations from the likes of The Beatles, Nirvana, Weezer, Modest Mouse, and The Cure amongst many, the pair crafted a strong collection of tracks before enlisting more band members to complete the line-up. Strong live performances built the band a fine local reputation and following, and with the current line-up of drummer Sean Pierce and bassist Maurice Vasquez alongside vocalist/guitarist Bergstrom and guitarist Paulet the band has forged an even more impressive stature which the album can only enhance.

Produced by Steve Murray and Matt Bombich, Words with Action has a title and personal breath which reflects and represents the

determination needed and shown by the band in the face of ‘overcoming personal vice struggles’. It certainly adds a depth and passion to tracks, and often a snarl to their radio friendly sound with more than a strong whisper of pop punk at times, which leaves a rich temptation at work, even if arguably it is often never fully realised and taken to its fullest potency. The album opens with The Upside and instantly puts out a welcome melodic hand and appealing energy  to draw in full attention whilst nudging awake an appetite for their easily accessible and pleasing presence. Good group harmonies lay with ease on the restrained but keen encounter, riffs and rhythms vibrant if undemanding, and sonic invention bright if like the hooks of the song not quite as anthemic as they might wish.

It is a very decent start though soon matched by Emily and taken to another height with Get Out Of Summer. The first enters the ear with a swagger within crisp beats before settling into creating an enjoyable glaze of melodic enterprise and passionate vocals speared by again pop hooks that get the job done whilst the second sets down the first pinnacle of the album. A funk infested rhythmic tease and bass lure opens things up before the guitars conjure up a contagious temptation of accomplished wanting to please hooks. Not for the only time on the album, the song inspires a strong and appealing feeling of Everclear to its well-crafted and skilful body which leaves the now brewing scent of hunger a little more to hanker for.

The likes of the smouldering Alright Never and the again Art Alexakis and co sounding I’m No Creep keep thoughts and emotions wholly entwined with their narratives, the first a sultry flame of reflective and melodic imagination honed into a richly riveting experience and its successor an expressive blaze of inventive traps and magnetic adventure which seduces the passions without any restraint.

Further highlights come with the bluesy Time Hates Both Of Us, the infectious Local Bar with its fiery guitar sound, and the inventive Factory, a track seemingly simple yet with a complex inventive craft and texture which leaves ear and thoughts wanting more. The finest peak on the album though comes in its closing song Pretty Microphone, a full on crowd and appetite pleaser with a virulently gripping groove and power pop barbs which leave long and lingering bewitchment in their touch. Vocally and musically everything is on a new plateau to what was already impressing previously, but here the band finally realise all the tempting tonic within their songwriting to enslave the passions.

Words with Action is a thoroughly enjoyable and as mentioned promising release which is just a spark away from being a real powerhouse of an introduction. The songs tease and suggest they are going to explode into an anthemic storm but apart from the last, they are just a step or so too short. You sense that this will emerge in the future though with this base of an album to launch from placing Avenue Army on the alternative/pop rock radar.