Like a warrior bold in its conflicts and proud of its beauty loaded landscape, the debut album from Finnish folk metallers Wolfhorde is an attention grabbing and imagination sparking confrontation. Towards The Gate Of North is a weave of melodic elegance and impassioned folk bred charm aligned to contrasting Viking roars and dark trespasses in word and sound. Fair to say band and album stride the familiar inspirations of Nordic and Viking mythology but twisted into adventures and creative lures which are forcibly fresh and individual to Wolfhorde.

Hailing from Keuruu, Wolfhorde formed around the year 2000 as a quartet and after a couple of demos or so, began majorly sparking intrigue and broader fan support with the EPs Deathknot and Nyvinland in 2010 and 2012 respectively. It is fair to say that the band’s first album has been a bit of a highly anticipated offering for a great many, and the trio of guitarist/multi-instrumentalist Werihukka, drummer/vocalist Hukkapätkä, and bassist Nuoskajalka are about to put themselves on the metal map with their voracious release.

Themed from “sad and gruesome stories about the end of the world in the Viking heritage and mythology”, Towards The Gates of North begins its journey from “the beginning of the end on to the beginning of a new world” with the instrumental Vegvísir. From its first touch, warm acoustic caresses collude with pulsating beats in a seductive call; traditional and melodically poetic essences emerging to paint a portrait of a vast beauty soaked landscape coloured with warm and cold climates with matching emotions. It is an inviting yet shadow kissed introduction to the album’s emprise potently awakening appetite and imagination ready for the more tempestuous Fimbulvetr. Swiftly it is rhythmically bolder and firmer, Hukkapätkä and Nuoskajalka unveiling an anthemic yet intimidating web around which the keys and guitars of Werihukka share their suggestiveness. Things darken again as Hukkapätkä’s bearish throat scarring vocals add their uncompromising impact yet melodies and a shamanic tempting radiate and evolve in response as the track immerses ears in a transfixing incitement. 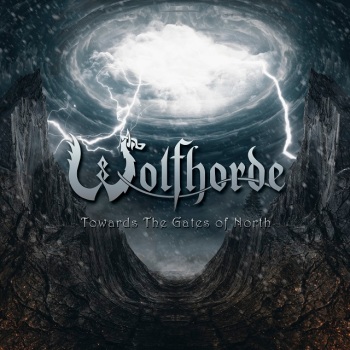 The creative and evocative drama of the first pair continues through Taivaankappaleiden Kato next, the track arguably a more expected folk metal charge with TÝR and Ensiferum like textures adding rugged hues to again alluring melodic and traditional qualities which from start to finish help give the album a rousingly celebratory yet unpredictable and enjoyable deceitful character. It is a great quality which, even in more familiar sounding songs like this, offers something individual to Wolfhorde, as proven again by the outstanding Death Long-Due and its mix of clanging iron like textures and mischievously appealing melodies sculpted from another great blend of traditional and electric enterprise.

Through the theatrical pomp and boisterous roar of The Retribution and the dark invasive charm of Unyielding, the album has hips and imagination enslaved. The first is a rousing revelry swiftly inciting feisty bodies and energy to get fully involved whilst its successor provides a melancholy aired saunter through dark scenery with prowling shadows linked to turns of galvanic revelling in turn bonded to ferocious provocation. The song in many ways epitomises the album, its twists and turns defying expectations whilst sculpting an adventure keeping ears and thoughts on their eager toes.

Boundless Agony is no exception, the raw delivery of Hukkapätkä’s vocals the strongest contrast to the swinging merriment of melodies and devilish hooks as feistier urgency and antagonistic elements bond with the band roar and the increasingly volatile nature of the exotically hued song in general. Another major highlight within Towards The Gate Of North, it catches the breath before the kicky exploits of the superb Lycomania run wild with rhythmic rabidity and sonic devilment. As all tracks within the album, it is a fiery contagion of sound and creative tempting, and as all only rewards repeated listens with its gripping invention and innovative contrasting of textures and flavours.

The finest moment of the album also confirms the potency of each member singularly and together, the trio then revealing their richest exploration in the creative trail of closing epic The Gates of North. The nine minute stroll is a full adventure on its own; a provocative and dramatic narrative of sound and tone that twists the imagination with its progressively tinged flight.

With maybe just a small want for more diversity in the vocals to suit personal taste, Towards The Gate Of North leaves ears enriched and pleasure full. It is a striking offering sure to push Wolfhorde into the broadest gaze of folk metal and indeed the metal scene generally; and seriously easy to recommend.

Towards The Gate Of North is out now via Inverse Records.