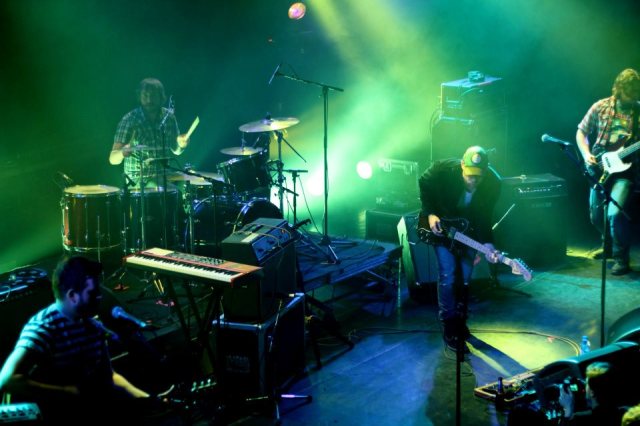 Unacquainted with the sounds of Scottish band Meursault but led by descriptions that their music was to simplify things electronic synth based lo-fi imaginations, new album Something For The Weakened emerged as an intriguing and very different surprise to what one expected. A release of eclectic invention and fully engaging creativity it pleasingly opened up and played upon the heart with compelling enterprise.

Edinburgh based Meursault began in 2006 formed by singer songwriter Neil Pennycook. The twilight of 2008 saw the release of debut album Pissing on Bonfires/Kissing With Tongues which inspired well spread acclaim. The following year saw a companion acoustic EP to the album released in the shape of Nothing Broke to be followed by what was said to be more experimental sounds within the pair of singles William Henry Miller Parts One and Two, and in 2010 second album All Creatures Will Make Merry. The album saw Pennycook bringing a mesh of twisted modern folk stories and honest introspective songs and again strong and thoroughly favourable reviews followed in its wake, Pennycook and Meursault lighting up a rapidly growing audience not only from their releases but live too.

Released via Song, By Toad Something For The Weakened finds Pennycook aided by the talents of Calum MacLeod,

Lorcan Doherty, Sam Mallalieu, and Ben Fletcher, exploring sounds, atmospheres, and emotions to leave one at the very least thoughtfully provoked. Recorded at Pumpkinfield Studios Perth and engineered by cellist Pete Harvey who also contributed musically, the album is a fresh and unpredictable pleasure of inspired songwriting and invention, its lyrics and sound deeply expressive and persistently impressive.

First song Thumb to be honest brought a little initial uncertainty. A simple union of voice, stirring strings and generally repetitive words brought with restrained emotion it played with a sparse yet delicate feel which as much as one tried to avoid reminded of the theme tunes to old seventies British Children TV show Bagpuss. The piece itself is strong enough but that element did leave one wondering where things were going.

Where it led was into the outstanding new single Flittin’. From its opening pinched squalls of atmosphere and stroking guitar the song erupts into a sweeping passionate envelopment of inspiring heart driven warmth. With almost anthemic surges the song wraps itself firmly around the ear ensuring a welcoming canvas for the compelling premise and its lyrical realisation. There is an epic feel to its air which reminds of bands like Letters and almost demands the most willingness of attention.

The folk pleasuring of the touching Lament For a Teenage Millionaire, a reworking of a track which first was unveiled on their debut album, offers another avenue for thoughts to immerse within whilst its outstanding and imaginative successor Settling from its distantly striking intro, evolves into a feisty brew of earnest vocals, incendiary passion, and wonderful flames of discordance to rile up the air. The diversity of sounds and songwriting is fully evident on the album at this point, their varied and evocative textures a constant unexpected and intriguing journey.

Tracks like the slightly distressing and powerful ballads Hole and Mamie, both heart tugging investigations to fall within, open up disconcerting at times but absorbing atmospheres to incite feelings. The piano and strings on the second of the two especially mesmerise and haunt to spark inner emotions and searching thoughts , again showing  the and mesmeric creativity on the album. It is though when Meursault raise the temperature and energies that they arguably draw the strongest responses as in Dull Spark. Led in by the brief ambient instrumental Lightning Bolt the track is a tempered riot of eager and resourceful melodies brought upon an exuberant energy of the fullest infection.  A song which heart and feet cannot refuse it is the fullest flame within the passionate fire of the album.

Meursault is a band which engages on many levels and leaves one deep in thought and pleasure. If intelligent and heart exploring songs excites your emotions than Something For The Weakened will be a sure passion.