You can never tire of being impressed by the growth and almost visual evolution of certain artists and one who seems to inspire increasingly potent acclaim is Tactical Module, the one man project of Michael Davis. Across his last trio of incitements alone, the British musician/composer has magnetically enthralled and excited with his fusion of industrial metal, digital hardcore, and EBM. Each encounter has shown new and often dramatic steps in the growth of the band’s sound and songwriting and new EP Before Crisis is no exception. Arguably it is not a big step forward from the last album Into Exile but certainly there is an even greater balance and fluidity between the raw and confrontational side of the vocal and sonic ferocity and the melodic and infectiously vivacious elements which so contagiously mark out songs. Increasing maturity and experience comes with every release of an artist and certainly Before Crisis is embracing an impressing wave of it through Davis.

Forming Tactical Module in 2010 to unleash a creative freedom restrained by being in bands and to explore darker and more aggressive electronic music, the Poole hailing Davis was soon sculpting a handful of digital EPs and remixes to increasing attention. Inspired by bands such as Nine Inch Nails, Ministry, KMFDM, Godflesh, Gary Numan, Skinny Puppy, Killing Joke, and Depeche Mode, Davis made a potent breakthrough with the Dead Zone EP in 2012. It swiftly gripped appetites and a more serious spotlight upon release, marking out Tactical Module as an emerging force and talent. Both the feverishly grasped single Where Angels Rise and first album World Through My Sight in 2013 reinforced his growing reputation whilst the Resurrection EP that same year and its successor Into Exile early 2014, found Davis breaching new plateaus with striking experimentation and emotional voracity. Released as 2014 closed its eyes and evolved into the New Year, Before Crisis cements the stature of Tactical Module in Britain’s electronic underground scene whilst as mentioning earlier showing an even more honed and masterful resourcefulness to Davis’ creativity.

The instrumental Awaken sparks the imagination first, its slow dawning of rhythmic enticement an intrigue loaded lure before synths spin their emotive sonic web. There is a portentous air to 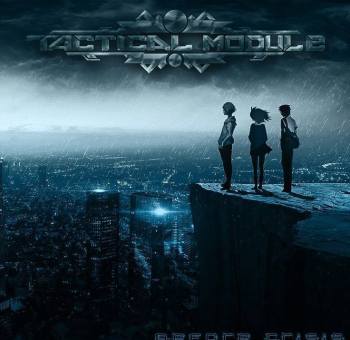 the opener and a prowl of dark shadows which bring a stark and threatening edge to the melodic charm of the piece. It is a magnetic lead into the EP and the following equally intimidating presence of Poison Within. Growing within a synth woven cage of gentler persuasion, the song eventually steps forward as an electro punk provocateur but an antagonist unafraid to employ the flavoursome melodies and sonic expression which coaxed in ears and appetite initially. As stormy in its disturbing quieter moments as in its open musical and vocal rages, the track ebbs and flows masterfully, waves of hostility feeding the appetite again and again within the equally imposing charm of the song.

Next the EP’s title track steps forward offering an immediate infectious shuffle of agitated rhythms under another brooding electronic sky. Davis as expected unleashes a cutting narrative with pleasing abrasing tones soon after whilst around him guitars add a caustic spice to the brighter revelry of the keys. It is a light to the song which as across all tracks, is held in check by the thick smog of angst and heavy shadows which fuel vocals and sounds alike. Here though it is given a longer leash which allows a diversity and tempting aural colour to have their just as potent say on the imagination, as repeated in the excellent To the Skies of Oblivion straight after. A song first found on the Resurrection EP, its bounds through ears and into the passions with a devilish tenacity and energy. It has an inescapable infectiousness which even aligned to the almost rabid furies in voice and menacing rewarding lulls which stalk the song never misses a step in its thrilling march.

The raw atmospheric opening of Assemble is an immediate temper to the previous devilry, its great stark and cold opening spreading an oppressive ambience which in turn courts an abrasion of hip hop spiced electro rock. Vocally too Davis briefly toys with a slither of rap enterprise to match the eventful adventure flirting within the invasive climate of the track’s electronic landscape. It is a slow burner in comparison to other tracks upon Before Crisis but emerges just as striking and enjoyable.

The final new song on the release is What Lies Beneath, another coming in from a distant pasture to embrace ears in drama and a blend of creative antagonism and melodic grandeur. Also a slower persuasion, the song is a compelling narrative of sound and emotion but just lacks the indefinable spark of earlier tracks and misses igniting the passions as successfully.

The EP is completed by a trio of remixes, the song Before Crisis being redefined by Ruinizer and Assemble receiving creative treatments from Cease2Xist and Dali, the latter of the three working the psyche with particular deftness and all offering captivating dimensions to the originals.

Tactical Module has again shown itself to be a bright and imposing spark in the UK electronic scene through Before Crisis. It is a release little to find an issue with, though just as an experiment we would like to see Davis being more adventure into his vocals ahead, and a tempest of invention fans will devour greedily.

Before Crisis is available now @ http://tacticalmodule.bandcamp.com/album/before-crisis