Like intoxicating liquor, some flavours simply grown stronger and more compelling with age, and that is the same with Bitter Pill, the new video single from British independent rock artist Pryti. The song comes from the Birmingham singer songwriter transfixing and mightily impressive debut album Tales Of A Melancholic, which was released on her own label, Welcome To Pariahville early last year. Within the collection of dramatic and imposing landscapes of emotions and dark shadows, Bitter Pill certainly captivated and infested the imagination with its “bracing vocals and melodies caught on a passionate sonic wind”. Fair to say, as the album, it just grew with every listen from there but it is now on its own, and for whatever reason, the song really seems to have gained its biggest blossom as one seriously enthralling moment.

Inspired by the likes of Deftones and Paramore, both audible spices in Bitter Pill, Pryti is quite simply a sonic force all on her own. On the single and album, she was the sole source of songs, vocals, guitar and bass; a resourcefulness and strength which goes with the DIY ethic of her label and presence. It is a talent which only impresses when hearing her Justin Hill (Sikth, Heart of a Coward, Yashin, Bury Tomorrow) produced and majorly acclaimed first album, Tales Of A Melancholic and only does so again with Bitter Pill.

The song instantly grips ears with its dark ambience and portentous beats, the lone lure of guitar as melancholic as the sounds around it are imposing. Pryti’s vocals equally have a solemn resonance to their intimate emotion and beauty, only flaming with greater inviting hues as the song equally rises in intensity and suggestive drama. That Deftones influence is an open colour, adding to the almost invasive air and tempestuous nature of the song. It is simply intoxicating stuff, a beguiling and haunting incitement of ears and imagination which shows no lessening of its potency even as lighter breezes dare to creep in on the compelling act.

Equally the video for Bitter Pill is as invasively mesmeric; Pryti alone in a shadow washed forest an evocative visual melancholy only reinforced by the elegant moves of the masked dancer which seem to add  to the song’s heart spawned solemnity. Directed by Marcus Maschwitz, the film is a captivating piece which draws rather than distracts attention to the actual song and its open heart.

The press release for the Bitter Pill suggests that, “There is little doubt that 2016 is going to be colossal for Pryti.” We for one will not argue.

Tales Of A Melancholic is the debut album from Pryti, an emerging British solo artist already making a striking mark, with her seriously accomplished and captivating fusion of heavy rock and melodic metal, on the national scene. Consisting of ten tracks which roar with the emotional snarl of the Deftones, cast a Lacuna Coil like creative theatre, and smoulder with the melodic prowess of Paramore, all over dramatic landscapes sculpted by voracious riffs and predatory rhythms, her new release is startling in its potency and skilled in its expressive persuasion. Also embracing elements of alternative and varied rock flavours, the album grips the imagination and leaves a deep rooted want to hear more.

Bringing all the guitars and bass on the release to her captivating songwriting and vocal strength, the Birmingham singer songwriter is no stranger to garnering acclaim and attention. Her last EP Welcome To Pariahville, also the name of her own label, was a big spark to an increasing spotlight and acclaim from the Rock/Metal community. Magazines like Kerrang! and Rocksound were close on the heels with coverage and praise too whilst radio airplay was soon embracing Pryti’s sounds, especially for more recently released single Abyss. Produced by Justin Hill from Sikth, Tales Of A Melancholic casts a broader and greater lure to that awakening attention, one easy to anticipate being reciprocated in greater praise and focus.

A portentous ambience brings opening song Insomnia into view, a sonic haze wrapping ears as thick prowling beats and caustic riffs follow in close attention. They all relax as the instantly flavoursome vocals of Pryti open the song’s emotional narrative, only the rhythms holding the same shape of their initial pungent presence. Vocally Pryti soars with a substantial yet harmonic roar 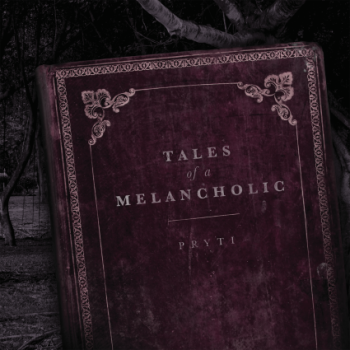 which alternates with an elegant seduction. It is a blend across song and the album which can be best described as Dolores O’Riordan of The Cranberries sings Deftones but with a much feistier and fascinating presence then that suggests. The song itself continues to breach new climactic heights and strengths, guitars and keys a riveting proposal against the rousing voice of Pryti.

The Pessimist follows and straight away grips ears with its opening graze of dirty raw riffs swiftly aligning to evocative vocals. Melancholic yet warmly radiate within its increasing shadows, the song is a brooding tempest which eventually erupts with muscularly swung rhythms and a spicy sonic enterprise which has senses and imagination bound and bewitched. The track continues the impressive start to the album; the first two songs backed again, and eventfully surpassed by the previously mentioned single Abyss. Sculpting a web of intensive emotional and sonic turbulence, courted by a melodic radiance, the track is a moving tide of personal angst and melodic intimacy within a stormy atmosphere. It is an enthralling and anthemic incitement, and there is no surprise that it turned a great many heads on its first appearance.

As the second song, the next up Purge opens with a gritty edge to its opening chords, bait contrasted and complimented by the increasingly siren-esque tones of Pryti. Shadows wrap the balladry of the song whilst a creative bellow drives its heavier tempestuous turns of pace and intensity. The result is another intriguing and captivating exploration emulated right after in the solemn beauty of Bitter Pill and the haunting Amnesia. The first of the two is a flame of bracing vocals and melodies caught on a passionate sonic wind, but equally prone to reflective calms within its provocative dip into dark drama. Its successor merges a sinister ambience with emotional anxiety, both aspects cultured by an unpredictable musical landscape and vocal intimacy. Though the song does not quite live up to its predecessors, it increasingly engages and enthrals before making way for the fiery storm of Angst. Boldly carnivorous compared to other songs as riffs and spiky grooves are immediately predatory, the track soon shows wider enterprise and invention by luring in melodic and harmonic caresses to temper and unite with the imposing ferocity of one more major highlight on the album.

The potent energies and creative tenacity of Battle Wounds brings its volcanic endeavour and emotion forward next before the melancholic beauty of Ghost takes the listener on a harmonic cruise across a melodic sea carrying an increasingly compelling raw and aggressive edge to its lapping temptation. Both tracks bond ears and thoughts with ease though are overshadowed by the outstanding closing song Burden, a song which epitomises and sums up all the instinctive strengths and exciting inventiveness bringing Tales of a Melancholic to life.

Pryti most likely to most would have been an unknown name let alone quantity before Tales of a Melancholic, but from this moment she is surely destined to be a name on the lips of and stirring up the British heavy rock scene. This is one album all should take a close listen to.