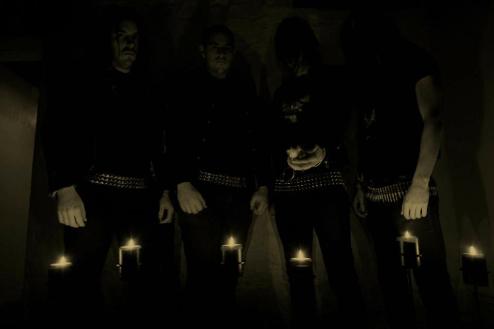 Released via Dark Descent Records and Woodcut Records, Poisoned Void is the long awaited debut full length album from Finnish death metallers Vorum. In 2009 the quartet unleashed what has been called as one of the best underground death metal of recent times with Grim Death Awaits, so anticipation for this first album was keen to say the least for a great many and it is hard to imagine they will be disappointed with its merciless intent.

Formed in 2006, Vorum has earned a notable place within Finnish death metal and the genre as a whole mainly through that first EP and also a split release with Vasaeleth entitled Profane Limbs of Ruinous Death in 2010. Whether Poisoned Void has built on or actually managed to equal that first triumph is debatable but the new album certainly is a striking and ravenous confrontation which does the reputation of the band no harm at all and will surely lead to a wider recognition. It is a dangerously aggressive and unrelenting violation which uses existing tools of the band and genre in an accomplished and pleasingly violent way. From first track to last the album is a dynamic and thunderous brute of a release which swamps the senses with dense hungry intensity and destructive riffs whilst offering an enterprise which grabs the attention. The album misses out on igniting a real fire for its impassioned insidious consumption but still leaves one satisfied and willing to be violated often again.

energy. Vocalist Jonatan Johansson spills venom with every rasping syllable whilst his and Matti Jalava’s guitars grind and sear flesh away from the ear with nasty irresistible riffs and sonic grooves. The rhythmic onslaught from drummer Mikko Josefsson is numbing whilst bassist John Finne bruises with every predatory note; it is an impressive start to the release which leaves no one wondering why the band has earned the acclaim they have.

The following Death’s Stains and Rabid Blood continue the impressive work, the first with an initial grooved sonic twisting which evolves into a storm of exhausting massive riffs and an intensity which smothers with thick relish whilst the second gnaws and chews on the senses with a malevolence which gives the devil himself a bad name. Though both are distinctly different they have the same effect of bringing their recipients to their knees and begging for more whilst whimpering under the barbaric annihilation. Arguably especially in the second, the glorious melodic twists of sonic flames do not feel at ease within the tempest and the tracks are more secure and insatiable when left to devour the listener. It is a minor niggle but one which does leave the album wanting against its predecessor.

Thriving Darkness is a stalking piece of persistent malice with a delicious groove to match, its presence an intimidating disease eroding away the senses and igniting a replacing consuming rapture. Like the album the track is a real slow burner which emerges as certainly favourite track if not the best on the release. It passes its evil baton onto the sonic demon Evil Seed, a song which burns and disfigures synapses like a sonic acid. It is pure sin, an injurious wash of malicious invention and intent. Like its predecessor the track takes time to make its carnal persuasion but succeeds with relative ease, though again the heated melodic spears of craft do not necessarily settle as easily upon thoughts as they would wish.

In Obscurity Revealed and Dance of Heresy offer further pleasing crippling ravishment whilst the closing title track is a final deep scarring to leave one blissful yet sore. From vocals to the heart driven sounds, track and album are certainly impressive if falling short of the very high standards Vorum had already put in place. It is with ease  though a cut above a great many of the other emerging underground death metal releases to appear over the past twelve months or so, and a must investigate for genre fans and those of the likes of Autopsy, Asphyx, Incantation and Convulse.