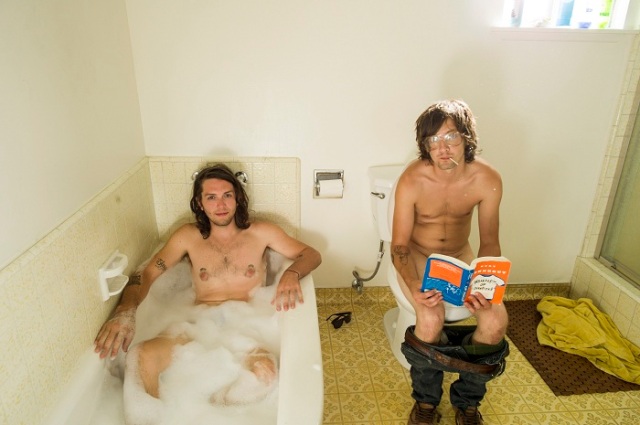 Going into this review the term stoner pop crossed our gaze and it has to be said an audible groan escaped. Not having been introduced to US rockers Tweak Bird before this, the worst was feared to be honest but it took no time for their new EP, Undercover Crops to dispel all worries. The seven track release is delicious, a gnarly scoop of sonic bubblegum ice cream which burns as equally as it leaves one drizzled in sweet pleasure. Though the term does kind of sum up the creations of the Los Angeles based duo it also trivialises what is going on, the intricacies and subtleties at work beneath the astringent embrace dismissed by its reference. The best way to describe the release is imagine Hot Hot Heat in a feisty embrace with Torche with extra mischievous encouragement from Red Fang and Morningwood. Yes, it is that unique.

Undercover Crops is the second EP from brothers Ashton and Caleb Bird and follows their self titled album of 2010.

Recorded over a long weekend in June with Toshi Kasai, who alongside Dale Crover produced and recorded both debut EP Reservations and album, the new EP brings something new to the genre, year and to those like us who had never met the band before, the heart, something  just unexpectedly thrilling.

The first track, Moans, immediately throws things into confusion. Having expected stoner, pop, actually both, the track offers up a repetitive electro rubbing. Its industrial dusted atmosphere is openly provocative and its aural voice, like the unrelenting repeating of words, droning but also the ignition of a maelstrom of thoughts in the brain. It is undeniably magnetic and easily ensures the stay for the whole and admittedly pretty brief journey of the release will be full and intent, eagerly awaiting the unpredictability on offer.

The following track People soon has the heart leaping, its scuzzy baritone guitar riffs and sonic blistering an abrasive extreme to the flowing falsetto vocals of Caleb. The darker though still mesmeric and far from heavy tones of Ashton, bridges the two opposites whilst within the music itself the track twists and swerves with finesse and infectious charm. To those earlier comparisons regarding the sound of the band, this song certainly vocally, springs forth thoughts of B52s just as strongly.

The hypnotic bluesy breath of Psychorain just sizzles on the ear and emotions, its again mesmeric pull from within what is an acidic and caustic presence is just irresistible. The track is like being encased in electrified bubble wrap, the highly charged sonic cage of sound and enveloping whispers leaving the senses tingling whilst being hit by exploding rhythms and popping riffs, and just as devilishly addictive.

All the tracks are brief, only one managing to worry the three minute mark, and that is the only complaint. By the time you have managed to grab a first proper breath since the start, you realise it is actually over and feel quite disappointed. During its engagement though time is a concept lost, the likes of the excellent Weight with its heavy slightly schizo energy and synapse manipulation alongside Pigeons ensuring nothing else exists whilst they are at play. The second of the pair has a breeze of surf rock permeating its melodic elegance and near corrosive guitar strokes across flesh and thought. Like on all the tracks, the raw air which everything within the song is immersed by is inciteful and intrusive, not to mention insatiable though so is the eagerness to devour it in return.

The release finishes with the sensational Bunch ‘O Brains, a track which leaves you in the same state as the subject of the song by its end, and Know It All, another slice of contagious psych and noise rock brought with a sludge blues driven rich heart. It is an impossibly addictive close to a quite brilliant release. As with all the songs, lyrically the band do not stretch literary circles but the repetitive lines and uncomplicated structures just completes the songs, ensuring nothing is too intense or demanding and perpetually absorbing.

Released via Volcom Entertainment, Undercover Crops is brilliant, simple as, and Tweak Bird the immediate focus of a retrospective investigation followed by the swallowing up of their earlier works. We defy you to try and resist not doing the same once they take over your ears and heart.

Grab a free download of the track People below