The successor to their well-received debut album, Wicked Way of 2016, UK quartet Echotape has just released the This Could Be Anything, an EP already sparking keen attention and success. It is a flavoursome dose of the band’s increasingly flourishing indie pop/alternative rock blended sound led by a single which in swift time was selected for Topman store UK coverage last month and featured by BBC Introducing.

Linking up with James Lewis (Clean Bandit/ Arctic Monkeys/ Rudimental) for the EP, Echotape have tapped into a fresh new breath in their music hand in hand with greater maturity in songwriting and sound. The EP has an air of confidence which in turn gives even greater energy and boldness to its body in relation to its impressing predecessor. It is an undisguised essence which fuels the striking presence and imagination of opener Forget It, that aforementioned lead single.

Straightaway jangling guitars and the rumbling tones of the bass coax attention; skittish beats dancing alongside as vocals provide their own potent lure within the track’s melodic breath. There is a touch of Skellums to the song as it continues to boldly stroll through ears with a creative swagger and vibrant air. The infectiousness which equally soaks the song seals what is pretty soon an already done deal, its instinctive catchiness gripping feet and spirit in no time for a party in the imagination. 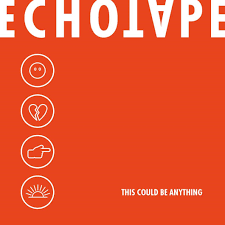 The following Out Of Love similarly makes a fully enticing entrance, its harmonic start breeding another eagerly infectious canter with sultry sighs to its sonic winds and atmospheric suggestion to its melody rich and harmonically glowing skies. Keys and guitars again weave a captivating enticement exploited by the outstanding vocal unity within the band; it all kept relatively earthbound by the grounded but no less tenacious rhythms.

Don’t Want Anyone keeps up the anthemic might of the EP with its own rousing roar. It does not quite have the weight and virulence of the previous pair of songs but easily has feet shuffling and energies sparked with its animated craft and invention before leaving for 4AM to close up the release.

The final song is an emotively honed ballad accentuating the impressive vocal qualities and strengths within the band. It is another moment of captivation which only grows minute by minute into another highly enjoyable and memorable experience. Certainly, Forget It is the jewel in the EP’s crown but every song within its walls suggests that Echotape is ready to embrace far bigger attention.

This Could Be Anything is out now via Believe Digital and Gentlemen Recordings on iTunes and other stores.