Recently the audience to The Reputation Introduces Radio Show heard for the first time and with an eager reception a song from UK band The Modern called SamePeople. The track was an older song so as soon as the band completed their brand new EP Dream Nights we dived right in to its depths to check out the fresh slices of sound from the bands creative minds.

The quartet from Worcester formed in 2009 and soon found them with a loyal fan following from their exciting live shows. The following year saw the band release their debut album Where Did All The Good Times Go? to good acclaim. Recorded  by Gavin Monaghan (Ocean Colour Scene/The Twang/Editors) at his Black Country-based Magic Garden Studios, the release showed off the band sound and energy to good effect. Their music carries a Madchester sound base, the songs emerging with a definite Stone Roses feel and elements of Happy Mondays, the band being a big fan of Shaun Ryder, and Inspiral Carpets.

Dream Nights starts with the title track, a song almost in two parts. It gently lifts off with a smooth soulful touch, the guitars twisting around the ear from Connor McMinn as vocalist Luke Morris delivers the lyrical content in a way that gently works its way into the thoughts though it comes with a hollow slight echo type production that takes a little time to get used to. Notable is the vibrant bass play from Will Lawrence who leads the track on with firm support from drummer Sam Ryan. The track exudes bursts of eager excitement at certain points but stays restrained until mid way when it thrusts forward with a delicious intense electrified guitar crescendo which dominates to great effect.

Previous download single Featherstone comes next, an initial gentle track which increases into a strong canter as it progresses. It has an 80s feel again but reminds more of bands like an electrified Farmers Boys or The Bluebells. The song swings gently across the senses  and still with this slightly hollow production comes over as an impressive pop song. With two tracks down the production does become a notable thing about the EP, and  though it may just be down to preference this echo like handling especially on the vocals is slightly distracting and becomes even more so as the EP proceeds, a shame as the songs despite this show good quality.

The EP’s best track is I Need You, a gem and crying out to be a single. The guitars play enthusiastically with a jangly scuzzy sound as Morris once more swarms over the track with good mellow but incisive vocals. The band do not try at all to hide their influences using these to great effect though maybe it is fair to say the band have yet to find a distinctive sound that makes people think of them before those artists the songs remind of.

Dream Nights is a fine release completed by more strong songs like Quick On The Draw with its easily digestible grace, the stoked energy of Start The Day, and the bluesy Stuck on Friday. Musically teach member of the band is accomplished bringing elements that grab attention whilst lyrically the band without becoming over complicated, avoid the obvious. It has to be said that the production does firmly hinders the overall effect of the EP especially regarding the vocals where they often feel unattached to the music, which is a shame as all elements are there to show The Modern is a fine band with good ideas destined to become even better. The EP without question though is definitely worth checking out for its satisfying sounds and a fusion of nostalgia and modern attitude. 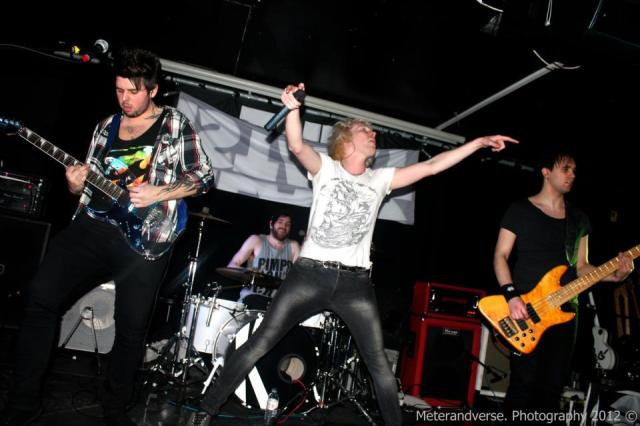 From Manchester, UK rockers Our Innocence Lost is a band with a difference. They robustly incite and flare up the senses like many other quality bands but surrounding their heavy forceful riffs and direct and far reaching melodies there is a passion and personality to their sounds which few other bands can bring as readily and consummately as the North West quartet. The music comes from beyond the heart, the band putting their soul into the eagerly absorbing creations they produce. Their new and second album Like A Complete Unknown is the perfect proof of their natural and organic use of this heartfelt emotion. It is taken and blended into an infectious melodic rock sound that never stands still, forever provocative and always trying new diverse ideas.

Formed in 2006 Our Innocence Lost has taken the UK by storm up and down its length as well as venturing over into the United States to great effect. Critical acclaim surrounded the band with the release of their debut album Facts Called Fiction via Sideout Records of Japan in 2008, the country alerted to a fine emerging rock band which was emphasised and built upon by a 36 date UK tour with American band Darling Waste and sharing stages with the likes of Voodoo 6, Glamour Of The Kill, Jody Has A Hitlist, Dear Superstar, Reckless Love, My Passion and Kiros over the past two years. Written and recorded during 2011 at Patron Studios with producer Elliot Middleton, Our Innocence Lost has unleashed in Like A Complete Unknown, an album which takes you to its heart instantly. It is a strong successor to their debut and more importantly an impressive continuation of the bands maturity and songwriting ability. 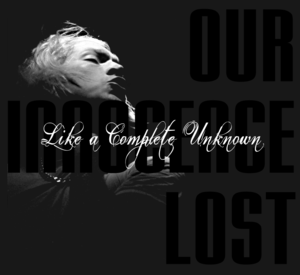 sounds that have evolved over the past years.  From the opening Worthless it attacks with a surety of a band confident in its path and skilled in its ability to get there. With sturdy riffs and attitude soaked vocals from James Holman the song plunders the ear with a defiance and strength which is impossible to resist. The guitar of Tom Crane is inventive as it leans on the senses with a striking melodic energy ably supported by the stirring bass of Steve Taylor and drummer Johnathan Kendrick, who constantly demands attention with his muscular beats.

One of the things that has grown within the band in the recent years is the harsher side of their sound, the post hardcore intensity raised to form a tight contrast and companion to the melodic prowess the band possesses. Holman growls and expresses a caustic malevolence at times which is an opposite extreme to his excellent clean vocals. It works impressively with the band using both spectrums seamlessly and always at the moments a song needs it.  Shout It Out is a perfect example. It is a song which engages the ear through mesmeric melodies and calm emotion but then removes the safety net with harsh interventions that stir things up wonderfully, expressing the lyrical turmoil to great effect. The song has led many people in eager anticipation for this new album, finding repeated airplay with the likes of The Reputation Introduces Radio Show. The song also raised expectations for the future which have been answered and surpassed with Like A Complete Unknown.

The songs come thick and fast in power and emotive creativity. The likes of the excellent End Of Time with a glorious bass led mid section where the band unleash their ability to out rock any band metal or other, the impressively diverse monster How Soon We All Forget, a song which easily combines a towering intensity and hard riffs with caressing smooth melodies, and the metal guided hard rock glory of Thank You take the album to distinct heights. It is a thoroughly consistent album too, from the more urgent strikes from songs like Breathe Deep and Over And Over to the inventive and exploratory sounds of the power ballad like Damaged Goods and Last Goodbye, the album never fails to bring a deep satisfaction and pleasure.

It is hard to pick any holes in the release apart from maybe an initial similarity which runs seemingly across it. Close attention shows that it is not so and there is a deep wealth of sound and variety within its walls but that initial impression does deceive quite strongly. Like A Complete Unknown is an excellent album from one of the very best emerging rock bands in the UK, do yourself a favour by taking a listen.