Insidious, the title of the first track on the new EP from Mexican death metalers Evil Entourage sums up the release perfectly. The Opposition is a release which beckons, entraps, and then unleashes its venomous heart deeply within the senses. It is violent and nasty but speared with precise grooves and intrusive energies which only leave one desperate to be violated over again.

Formed in 2004 in Tampico, the quartet has apparently become a major force in the underground metal scene in their continent and listening to The Opposition our first introduction to the band, it is no real surprise their stature there and one which should be emulated further afield ahead. From their debut demo in 2005 Devoured by Holocaust, the band has earned and built a strong eager fan base. Their first album Dominion of 2007 found a good response at home and around the world with the following years finding the band opening for the likes of Vital Remains, Nile, Decapitated, and Severe Torture, as well as sharing stages with established Mexican bands. 2010 saw second album Desecrators, a more brutal release than its predecessors, garner further strong acclaim from fans around the globe, as did their first videos.

Released through Chaos Records, The Opposition is set to spark an even greater reaction and recognition with its 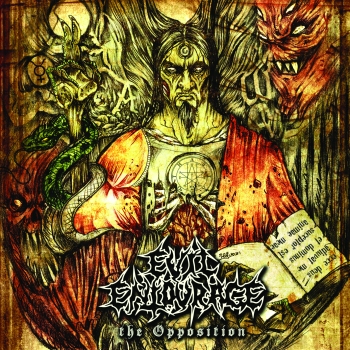 uncompromising compulsive sounds. Evil Entourage goes for the jugular immediately with the aforementioned Insidious. The track is an instant barrage of crushing rhythms and rampant riffs cursed with the excellent bestial growls of the vocals. They feast on the senses whilst the emerging infectious groove ignites up the air within the rabid intensity. From a raging charge the song at points drops into a prowling stance before revolving between the two, the tempest of malevolence never diminishing or less than impressive.

The following Swathe To Blind is an abrasive heavyweight corruption of blistered and guttural vocals, flesh flailing riffs, and barbarous rhythms. Like the opener it has a merciless energy to its staggering onslaught yet is mesmeric from its grooved insatiable appetite. Arguably the old school core and thrashing intensity offered here and throughout is nothing distinctly new but it is certainly one of the most contagious and gratifying genre releases this year.  By the second song you know the recognisable intent of the band and sound but also that it is being brought on an unstoppable surge of irresistible and greed evoked might.

The excellent From Inside I Burn and the ravenous and spiteful True Rejected enflame and squeeze the ear into misshapen satisfaction with their twisted melodic scorching and annihilatory riffing spiked by vicious rhythms to open the wounds even wider. With muscles bruising the senses alone the songs, and EP overall, are destructive animals from which only pleasure is derived. Musically the band is accomplished without being overloaded with flair but they know how to deliver sounds and grooves which leave only submission in their wake.

Featuring special guest appearances from Fabiano Pena (The Ordher) and Tommy Dahlstrom (Aeon), The Opposition is excellent, a release which has no need to find new weaponry to deliver death metal at its absorbing and addictive best. Evil Entourage is set to step from a whisper to a loud shout on lips around the world, with this release their first words.