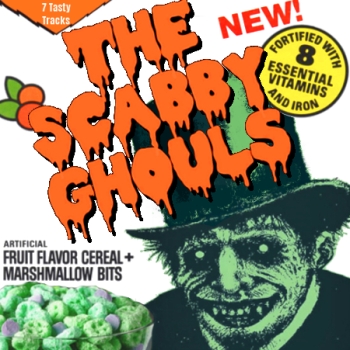 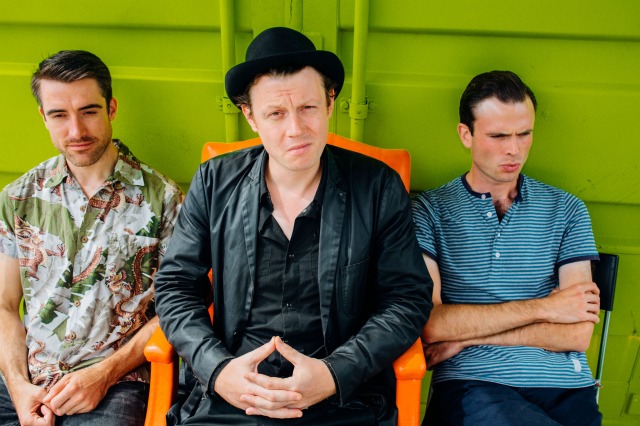 It is not often you get a real tingle in the ‘loins’ as a band tempts the ears for the first time, but there is no doubting the lustful response UK rockers Snack Family inspired with their deliciously warped Pokie Eye EP. Casting a sound which could be described as gothic blues but fits better the description of The Birthday Party in its early days meeting Th’ Legendary Shack Shakers in a sultry and unhinged embrace with The Fat Dukes Of Fuck and Melvins, the release is a unique and rebellious slice of rock ‘n’ roll derangement and inescapably addictive.

Hailing from London and formed in 2011, the trio of Andrew Plummer (baritone guitar/ vocals), James Allsopp (saxophone/key), and Tom Greenhalgh (drums) swiftly and understandably drew references of Nick Cave, Captain Beefheart, and Morphine with their startling invention, as well as an eagerly growing attention. Debut release, the Belly EP lit new fires earlier this year which Pokie Eye inflames again with its own rich tonic of Southern bred creative dementia. Recorded with Ben Lamdin at Fish Market Studio, London and wrapped in the striking artwork of conceptual artist Drew Millward (Gallows, Pulled Apart By Horses, Oceanside), Pokie Eye is a wake-up call for the imagination, psyche, and sonic insanity.

Lupine Kiss is first, swinging in on groove infected keys and mischievous beats all lit by jazzy flames of brass. It is an immediate trap soon developing a hazy seduction and virulent toxicity as a thick tang infiltrates grooves and the highly evocative sax temptation. The song soon nudges thoughts of films like The Monster Club and From Dusk Till Dawn, it casting the imagination in a jazz fuelled, liquor soaked nightclub dwelt by the most salacious dangers and evil seductions possible. The song swerves tantalisingly with its melodic curves whilst the crispy high-hat sound is simply tantalising persuasion amidst the devilment of the rhythms. Leading it all like a devious bartender is the gruff crazily alluring tones of Plummer, his delivery as fascinating and irresistible as the creative loco around him.

The track is a riveting enslavement soon emulated in its own wholly distinct nature by Plastic Factory, a cover of the Captain Beefheart classic. Within seconds the song is strolling with

bulging beats and flirtatious sax temptation but wrapped in a sinister and darkly enticing air, its fiery rock ‘n’ roll tempered by the prowling stance of the song and the heavy basslines courting the gravelly vocals. It is a blaze of aural salaciousness, especially from Allsopp’s sax which when really inflamed reminds big time of the kind of brilliant discord cloaked revelry Essential Logic conjured back in the seventies.

No Reason is a journey into the darkest and menacing corners of the mind and Snack Family’s invention, the song a slow swarming croon of a proposition embracing the heavy smoky Cash like tones of Plummer. It is stuff of your darkest dreams, a brilliant noir drenched, jazz bred smoulder of primal seducing and imagination. Keys resonate as indefinable sounds simply colour the drama, the track enthralling and immersive but most of all just brilliant, though it is soon surpassed by the closing revelry of Pokie Eye Poke Ya. The final song is psychotic manna, from the first flirtation of sax soon joined by a contagion of rhythms which in turn ignite a Cajun kissed jangle of strings and vocal rampancy, the track is simply sensational. Percussion and beats are as psychotic as the sounds dancing with lost inhibitions around them, a mix recalling again Th’ Legendary Shack Shakers but also Dutch band De Staat. It is rock ‘n’ roll devilment, a lunacy as controlled and resourceful as it is manic, and easily one of, if not the best song heard this year.

Pokie Eye is a must for all those with a taste for the references offered here or anything from blues rock, psychobilly…well simply rock ‘n’ roll of any slightly off kilter colour and ingenuity. Snack Family just might be our new favourite band and we suggest they may be yours too.

The Pokie Eye EP is available from December 6th via Limited Noise @ http://snackfamily.bandcamp.com/album/pokie-eye and through iTunes, Amazon, Spotify, etc.