Time to dig out those Go-go and Cuban heeled Chelsea boots or your brightest Winkle Pickers, French rockers Les Grys-Grys offer the perfect opportunity to give them a feverish work out with new single Left Unseen. Consisting of two tracks which whip up a frenzy for feet and a nostalgic appetite to get greedy with, the band confirm themselves as one of the exciting new faces on the garage rock scene.

Hailing from Montpelier, Les Grys-Grys openly wear their sixties inspirations on their sleeves and in their invigorating sound. Starting out playing covers, they have absorbed all the choice essences of bands and sounds which have influenced them and infused them into their own invigorating proposal. The two songs making up Left Unseen, and equally last year’s debut single Hot Gully Wind / Neighbour Neighbour released on State Records, draw on r&b, beat, and any other hue of garage rock ‘n’ roll you can think of, honing all into parties for body and soul. The result is something boldly familiar yet refreshingly individual and current, a sonic adventure for dance-floors and venues surely luring cats of all ages and decades when Les Grys-Grys are played and in town.

Left Unseen explodes in ears with an almost concussive launch of meaty beats, a pungent lure soon wrapped in the sonic enterprise of the guitars and, across the band, a magnetic blend of vocals. Within seconds toes are tapping, hips swaying, and ears greedily locked into the revelry, especially once the rich expression of harmonica and melodic acidity masterfully spilling from guitar strings joins the tenacious frolic. For two and a half minutes, song and band has the listener transported to decades past but involved in a modern mischief with hints of bands like The Kingsmen, and The Count Five nudging thoughts.

Its companion Mighty Crazy is just as irresistible, it’s opening on a fifties rockabilly riff alone enough to spark a licking of lips before the whole stomp breaks into a bluesy garage rock shuffle. Again guitars and harp unite for a frenetic quickstep of sonic devilment whilst the rhythms offer a more grounded but no less infectious invitation to indulge in. Once more like an old friend come to party, it is an inescapable incitement whipping up an eager storm of fun.

The devilry of both tracks borders on intoxicating, so much so that even the infernal fadeouts which normally annoy have no impact on the pleasure.

We will be honest, there is no particular eager appetite for sixties rock music at The RR but with more bands and offerings like Les Grys-Grys and Left Unseen that has begun to change. 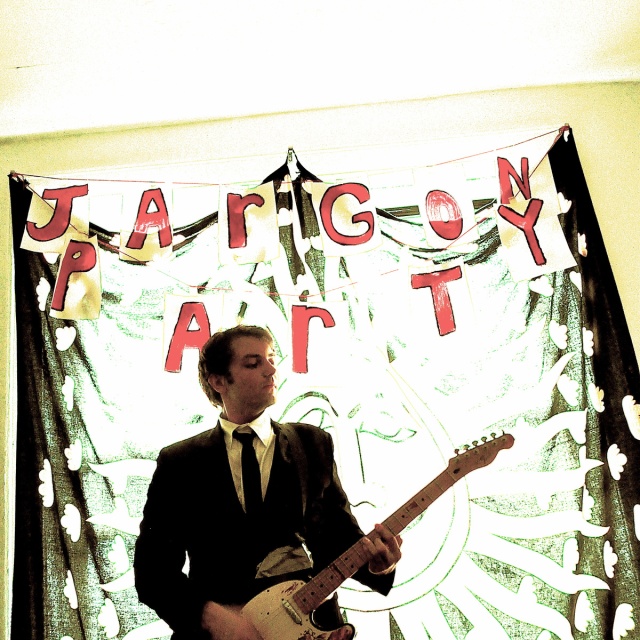 The debut album from US band Jargon Party is an encounter which equally tests and tempts the senses, a proposition which concerns and spellbinds simultaneously. It is a release which maybe will not find a welcome with everybody though at its heart there is a seductive revelry and potency which refuses to relinquish its magnetic hold. The solo project and release of Zach Lewis, the album challenges and stimulates from start to finish, its sound heavily influenced by The Beatles and sixties pop whilst fusing plenty of invention and tasty flavours from indie to punk, surf to garage rock. Its biggest lure is the wonderful continuous drift of discord which soaks every aspect of the songs but its main and really only issue are the vocals of Lewis. Though successful at times his voice struggles with notes or vice versa, to defuse enough of the undoubted qualities of the songwriting and the generally thrilling sounds, something you can see putting many off before giving the release a chance. As it stands the album is an engaging and imagination feeding satisfaction but with a more accomplished singer it is easy to suggest the release would be stirring up passions and being talked about loudly.

Originally from Brooklyn and recently based on an Island off of Portland, Maine to record his new album, Lewis creates a lo-fi, garage feel to his sound which easily grabs ears and an healthy appetite. Jargon Party began around two years ago after Lewis moved to New York City aged 22 after years of playing in different live bands in Richmond, Virginia. The band was initially a six strong proposition before other projects and personal interests saw members leaving and the band dwindled down to a duo and subsequently just Lewis. A multi-instrumentalist, having learnt as many instruments as he could since a child, Lewis recorded his debut in his apartment and that of drummer Dave Charboneau who contributes to the album also. Released last year but still drawing in attention, as ours, the album parades openly the inspirations of the man, the likes of The Kinks, Arctic Monkeys, Of Montreal, Radiohead, Wolf Parade, and David Bowie adding to the loudest soak of the previously mentioned Liverpudlians.

Exploring ‘the ups and downs of life and love’, the album opens with Isabella a masterful romp of garage rock; sultry guitars entwining fab four like vocals whilst rhythms romp with a lively smile and mischievous suasion. The sixties lilt to the melodic stroll of the song and psyche teasing revelry to its touch makes an absorbing and exciting  start to the album, like a feisty mix of The Kingsmen, Thee Headcoats, and The Youth. Everything about the song is a contagious incitement bridging nostalgia and modern imagination to set the release and anticipation off in fine style. That heady expectation is soon well fed by the intriguing Internal Clock. The bass and guitar coax thoughts and emotions from the first second whilst delicious washes of discord providing unpredictable bait to devour eagerly. The effected wrapped vocals also add to the lure of the song, their touch shading the first signs that the vocals may be a weakness on the release. The wrong footing twang of the sonic designs continues to ignite a hunger towards the release, its confident and carefree provocation on ears and assumptions a very pleasing toxicity. With guest keys from Lydia Velichkovski adding to the mesmeric mayhem, Jargon Party keeps its initial grip firmly in place.

The following Lucy Melanie unveils a fifties rock ‘n’ roll swagger to its romp, vocals again cloaked in effects for the sixties pop bred dance though their hold on notes and harmonies begin to show signs of wear. Like the opener, the track slips easily through the ear musically offering garage rock seeded pop to breed very willing participation whilst the twists of discord and direction succeed with thoughts and satisfaction. The lo-fi, DIY touch of the production and recording also adds to the potency of this and all songs, its rawness hiding some of the sins and accentuating the nostalgia spawned voice of songs.

The smouldering croon of I Want to so Much embraces with appealing tempting, especially with the celestial twinkling of the keys though Lewis gives it too much to overcome with his delivery to match the previous tracks; it much the same with Surf Rock Anthem 7 though its opening provocation of dark moody basslines, crisp rhythms and punk guitar sets up an infectious incitement which persists across the whole of the undiluted garage punk dance.

The slow psychedelic pop of Giraffe fails to capture any real hold on the emotions, mainly because of those vocals again, though it takes corners and flavoursome turns which again shows the strong promise of Lewis and the project, whilst next up Under the Sun with its bluesy guitar flames and thick climactic melodic heat proves the enjoyable variety to the sounds bred in the album.

The release is completed by Will You Space Tonight and Sky Pilot, two tracks distinctly different to the others with further spatial investigation within psychedelically toned atmospheres and dream pop embraces. The first of the two is a decent enough flight whilst its successor thrills more with its evolving landscape which takes in scenery from progressive and psychedelic pop through to noise rock and eighties indie rock. It is a great end to a release which ultimately captivates with its excitable invention.

Vocally Lewis should reassess his options for greater success but musically Jargon Party, project and album, shows plenty to warrant being given proper attention.