There is a video going around and hitting news stations over strange unearthly noises invading ears and psyche from around the globe. Is it terrestrial bred, alien spawned, or the earth groaning? No one knows but I would suggest the cause just might originate from the practise rooms of US duo Noise-A-Tron, because their new instrumental EP Vast Arcane is a doom spawned confrontation casting similarly portentous and haunting roars of sonic disturbance and apocalyptic seduction. It is also seriously compelling, an irresistible experiment of drone fuelled noise rock which magnificently challenges and ignites everything from ears to imagination.

Noise-A-Tron consists of drummer Jason Bledsoe and his wife Lea on synths and bass. The seeds of the band began with Florida band Bullhead in which Indiana bred Jason played. They released two EPs and in 2000 recruited Michigan born Lea Rudko into the line-up. Previously she had played in experimental noise project Terror Organ, a two piece with Angel Corpse singer/bassist Pete Helmkamp. Early 2002 saw the demise of those bands and the beginning of The Human Echo which went on to release a couple of well-received albums and undertake several tours. In 2005 Jason and Lea married and four years later the end of the band was the springboard for the rising of Noise-A-Tron. The pair released a well-received self-titled EP in 2010, its impacting presence and invention continuing through Vast Arcane in the same heavy imposing way but exploring even darker ravenous realms of sound and emotional menace through an invasive sonic bleeding of noise. It is a ravaging trespass of the senses and emotions but at times equally as anthemic and seductively potent in its enterprise and temptation.

The release opens with Intro, the track as its title suggests setting up the oppressive and suffocating atmosphere of the release but featuring as an individual proposal in its own formidable right too. Keys spin a haunting ambience from its first breath, an emerging spatial atmosphere punctuated by heftily swung beats from Jason. The imagination is swiftly alive with ideas and adventures sparked by the piece, thick sonic bellows and slow laboured roars alone enough bait to dark cinematic flights of fancy. 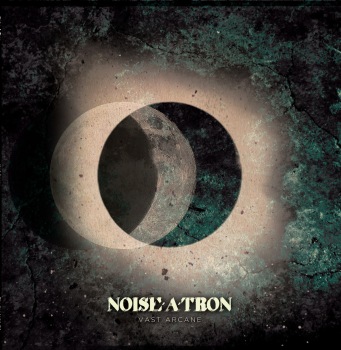 Following track Six, all songs consecutively numbered, has a lighter air, well in relation to its predecessor, but one again permeating the senses with creeping shadows of sound and intent. The 8-string bass flirtation from Lea is as transfixing as her skills on keys, a fascinating tangle of textures mixed live whilst mesmerising ears and air with startling invention. The track as the album is contagiously meditative, every sonic yawn and piercing intrusion as hypnotic as it is fearsome, and often equipped with infectious virulence. Even in its caustic and harshly aired finale there is a gripping essence which simply enthrals. Like a sub note to the stark narrative of the track, the brief inescapable lure of Six Point Five takes over next, bass and drums a riotous anthem of epidemic agitation and addictive enterprise. It is a festival compared to the dark climate of the previous sounds but still only offering a menacing tone and enticement at its heart.

Seven slips back into a lumbering gait and intensive examination of noise and listener, though its gaping sonic voice and physical consumption wraps around another lively incitement of rhythms. There is vastness to the piece of sound, though courted by the more intimate touches of drums, an exploration of depths which from the EP artwork hint is celestial but can just as easily be a flight into the unknown depths of earth and sea, or the darkest inescapable nightmares of the mind.

The erosive invasive beauty of the track continues into the epic closer Eight, near on fourteen minutes of rhythmic provocation immersed in a bracing sonic swamp thick in noise and intensity but breath-taking in its ever evolving scenery. As in all tracks, the textures crafted and spun out to startling impact are beautifully layered, each element given a clarity which defies the overall sweltering climate of the increasingly dark and imposing but always seriously giving soundscape.

The quite brilliant Vast Arcane and indeed Noise-A-Tron themselves are not going to be for everyone, the intensity and raw essence of their sound a challenge too far for many, but if any mix of bands like Morkobot, Dope Body, Godflesh, or Sunn O))) sounds like a great appetiser then the Seattle pair have an extraordinary treat in store for you.