The Life EP is a delicious emotive storm of post hardcore from a band which has already garnered strong acclaim and support since forming in 2009. From the North East of Scotland, ElevenEleven has taken a major step forward from already impressive earlier releases with their new EP to give the genre in the UK a new tempest of creativity. It is an expansive mass of passion which without inventing new tools uses existing genre weaponry to fresh and adventurous heights.

Since their first days the quintet has shared stages with the likes of Lower Than Atlantis, Flood of Red, Heights, The Elijah and Don Broco, made their own successful national tours, and released to acclaimed reactions the Memoirs (Part One) EP in 2010 and a two track release The Light/Dark Sessions in 2011. Last year though was one which brought a few obstacles the way of the Aberdeen band in the shape of serious illness, a line-up change and the subsequent collapse of their intended second EP. The band has on the evidence of Life though emerged a greater and even more imaginative force and by marking their return with the EP as a free download, has opened one expects the doors to greater recognition.

Life is seemingly inspired by the previous months for the band, its themes of love, loss and life trials maybe not directly reflective but 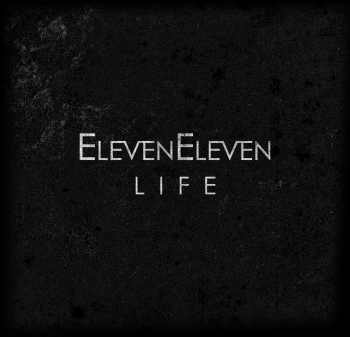 it feels as if it is charged and emotionally sculpted by events. It is an atmospheric wrap with is intrusive and weighty whilst offering a captivating shadowed beauty. As the release agreeably scores the senses the obvious comparison is Deftones but to that you can add essences of Funeral For A Friend, Thrice and Devil Sold His Soul, with dark whispers of muse and Incubus for extra spice. It is a dense engagement lit by melodic invention and sonic skill, and an encounter which as soon as Lost unleashes its passionate heart finds a fulfilling connection to the listener. The opener stages a dramatic initial contact with bruising rhythms from the drums of Ross Senkbeil and the intimidating bassline of Stuart Ritchie within caustic flames of guitar from Eliot Leonard and Euan Wilson. It is a striking start which with the entrance of the fine vocals of Chris Spencer entwines and exchanges its intense gait with another of smouldering mellow ambience, the ‘respite’ itself also carrying a charge of passion which ignites thoughts.

The following Iscariot offers a similar stance though is still distinct in presence, soaking one in further intensity and thick melancholy to challenge and reward equally. As with the first, it is a song with a haunting shout to its voice and a coarse defiance which erupts in scowls of vocal rage at times alongside the increasing impressiveness of Spencer. At this point as one wonders if the whole release would offer a similar breath to is passion, the band shifts into a harsher aggressive tact with The Other Side. The song is an energetic badgering of the ear with an irresistible groove and questioning air. It is an excellent provocation which shows another side to the band whilst stretching their invention and skills in a new direction. Probably the most accessible of all the tracks it leaves one glowing in satisfaction to the same depths of the previous songs but with an openly different aspect.

The release is completed by the expressive rich sonics of Chemical Dreams and the slowly emerging passion of The Ocean. Both songs again venture down new soundscapes and songwriting craft whilst making seamless connections to the other tracks. The latter is a rising torrent of emotion which like the subject of the title ebbs and flows, rises and sweeps over the senses in powerful waves. It is an exceptional end to an excellent release which at times makes you work with it to discover all its wonders but ensures only a wealth of pleasure in return.

ElevenEleven provide something fresh and inventive to a genre which has seen many new bands step forward this year, but this quintet is the one you feel will go the furthest.

Whether the expansive and impressive sounds of UK band The Elijah find a welcome in the heart or not one cannot help but be stunned by the expansive and creative might the quintet possess.  It is safe to say they will not be a band for everyone but they certainly are not one you can ignore or forget. I Loved I Hated I Destroyed I Created is their debut album which at times is as equally challenging as it is deeply enveloping and emotively inciteful. It leaves one rich in thought and grasping for support before its magnetic beauty and intrusive and destructive veins. Arguably not an album to see off or dispel any black shadows within, in fact one wonders if it should come with a health warning for such dark times, it clasps the senses with epic weaves of compulsive ambience and striking textures. There is a haunting breath permeating every note to ignite emotions and thoughts incessantly whilst the music wraps itself around the ear with sheer quality and imagination veined with a kind of self harming intensity.

The Elijah according to the promo sheet with the album was “determined to make a record that sounds like no other”. The North Shropshire band certainly achieved that and though you could cite bands which have taken a similar premise as The Elijah it is hard to bring to mind many as dramatically successful and as startlingly powerful. The past year has seen the band leaving audiences breathless as they shared stages with the likes of Hope Dies Last, Matyr Defiled, Liferuiner, and The Bled and the band is on the back of the album, destined to again ahead as the five piece head out on tour with As Cities Burn in July and Hawthorne Heights in September and October.

the ten tracks on I Loved I Hated I Destroyed I Created. There is also inspired rightly or wrongly, thoughts and emotions borne from despair and desperation as the tracks play like a soundtrack to enflamed shadowed passions to wonderfully encroach either tenderly or with a fuller intensity on the heart.  The songs from the opening In Misery through to the wrenching closer I Created are a sonically soaked emotional wave upon wave of sound, all carefully and diversely  shaped and flavoured but with an overall seamless presence. Like the way feelings and thoughts evolve through varied states within a deflated or elated heart the songs shift and expand within one album long emotive consumption.

The likes of I Loved, In Fear, and In Death combine inner peace and ignited harsher shadows wonderfully and though most songs stem initially from the quiet into dangerous and incendiary states they are brought with distinctly varied and gloriously imagined invention. The smooth vocals of Mike McGough are stunning throughout, the singer/guitarist marking himself as one very accomplished and expressive vocalist. Combining with him and bringing the corruptive element of the sound is Dan Tomley, his disruptively harsh delivery fuelling the dark and near violent shades of the album. From personal preference his delivery at times threatens to permanently distract from and spoil the beauty in the songs to leave one longing for a different or better control on his part, though saying that he more than adds to the anguish and distressed emotions during songs perfectly.

The highlights of the release come in the shape of the simply irresistible and majestic instrumental In Regret where the pure class and beauty of the band in play and composition is at its height and the unnerving emotional dissection which is I Hated. Both have a resonance and atmosphere which not only erupts the senses and mind into sparse thoughts but linger to continue inciting ideas and feelings.

We cannot say I Loved I Hated I Destroyed I Created is one of our favourite releases so far this year but it is definitely one of the most skilful and imaginative let alone provocative to treat the ear. The Elijah from this impressive opening is a band destined for global appreciation and acclaim. This album might not be the right key but it will happen.