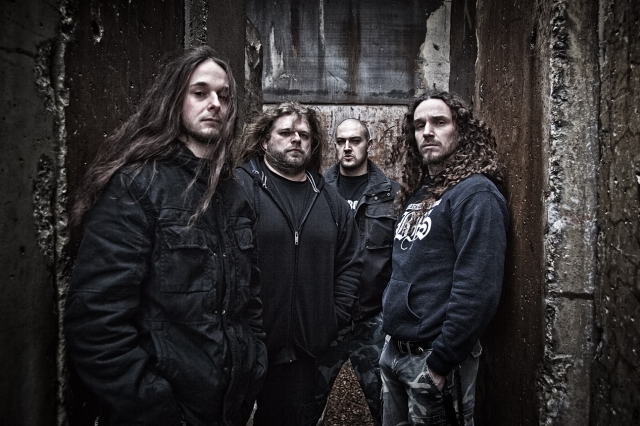 From the very first drum hit Mayhem Maniac Machine from German tech-death metalers Deadborn lights up the senses with formidable yet undemanding, insatiable and high quality destructive sounds. Consisting of nine muscular deliberately combative tracks the album is a deeply satisfying varied and abusive tower of steel.  Unrelenting with brutality and direct sonic manipulations Mayhem Maniac Machine hits every one of the senses with an unerring bullseye.

Formed in 2002, Deadborn released their first four-track EP Decades Of Decapitation two years later to be followed by their debut album Stigma Eternal in 2007. Both releases as well as tours with the likes of Graveworm, Disbelief, Hate Eternal, Cephalic Carnage, and Dying Fetus, and their own shows brought them an enthused attention and respected name within German metal and further afield. Now consisting of vocalist Mario Petrovic (ex-Necrophagist), lead guitarist Kevin Olasz (ex-Jack Slater), Jo Morath on rhythm guitar, and drummer Slavek Foltyn (ex-Necrophagist), Deadborn look set with their new album released via Apostasy Records on April 20th to take an even bigger stake in the attention of the world.

Mayhem Maniac Machine is an unrelenting technical metallic dance across the senses, each and every track ripping

away their safety to replace it with tense intrigue and intimidating intrusive grooves. There is no respite from the driving aggressive rhythms, crushing defiant riffs, and scorched blistering melodies that frequent each and every metallic soundscape on offer. The album to be honest does not open up new chambers of sound and directions but simply is a gloriously stimulating and exhilarating rampage to full within and be inspired by.

Though classed as death metal the album opens up many more doors of metal to add a extra flavour to their striding sounds. From the opening march of Premises Of Cryonics one feels ranks of varied metallic spices coming together to lead a mighty and unassailable sound. The track forges a deep bond between complete captivation and senses obliterating extreme metal to create a song as catchy and irresistible as it is disarming and venomous. As the rhythms of Foltyn hungrily and continuously machine gun the ear the guitars lead the rest of the body and thought through showers of flesh stripping riffs and burrowing razor sharp melodic intrusions.

The following Profanatic Reanimation takes a sideways step in sound to infiltrate the listener just as accurately and effectively as the opener. The groove and melodies fly with a raised temperature and acidic sound to ride the wave of heavy weight rhythms and intensity from bass, drums, and the excellent bestial growls of Petrovic. The vocalist offers an overall similar styled attack throughout the album but adds a coarse mesmeric edge that ensures it never grates or becomes dull and constrictive within the songs.

The album has a mass to it not only from the music and intensity but also within the production from Christoph Brandes. Together he and the band have given Mayhem Maniac Machine an intimidating thickness and imposing ominous atmosphere but still have brought and allowed clarity to the intricate exploitive grooves and the at times deranged rhythms. Songs like the combative declaration that is Slaves Of Megatron, the sonically piercing Reinvented Power Process, and Second Order Cybernetics a full fury of metal, all lay their bulk upon the ear whilst splintering into distinct and openly compulsive features.

The twin highlights on this impressive album, are Insane Motor Cortex and Replicants Device. The first is the best track on the release, an uncompromising stretching of the senses through cyber madness and tumultuous metal invention, every note like a destructive nanobot stripping the body of feeling and breath. The second of the two stands over the ear like a towering behemoth of hardened iron, its riffs dropping down like lead from on high whilst the melodies and insistent groove garrottes feelings and emotions. Both are majestic death/metal conjurations from a well of maniacal ingenuity and ferocious intentions.

Mayhem Maniac Machine is a gem, an album that intrudes upon and makes use of every part of the body and in return rewards with sheer unadulterated metallic pleasure. It is hard, consuming and without mercy, and also as is Deadborn, the reason metal is so important to our souls