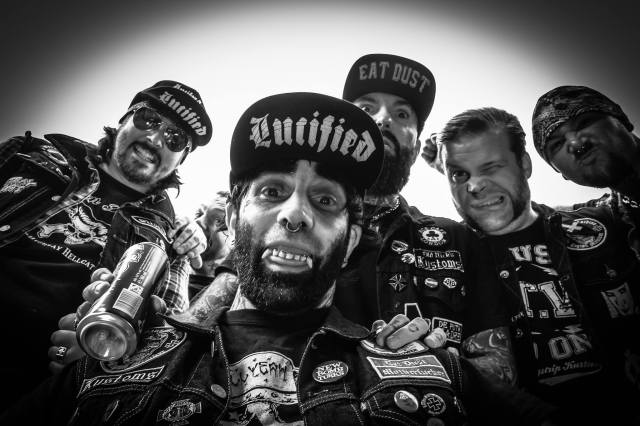 It is easy to note many musical highlights for 2015, some individual to taste and some generally acclaimed. One was certainly the way the year went out with a bang with some of its most impressive and exciting encounters coming in its final weeks, indeed days. Amongst them was Eat Dust, the new single from heavy rockers Lucifer Star Machine, the long awaited next roar from the band following the release of the acclaimed album Rock’n’Roll Martyrs back in 2013. The two track incitement shows the band is just as sonically dirty, creatively belligerent, and voraciously uncompromising as ever, and still one of the most appetising punk ‘n’ roll rumbles to come out of the UK in recent years.

Formed in London in 2002, Lucifer Star Machine quickly and has continually made their mark with releases and as a live incitement. 2004 saw the release of debut single Death Baby, a roar produced by Rat Scabies of The Damned, followed by a pair of albums in Fire In Your Hole of 2005 and Street Value Zero four years later which only increased the band’s reputation. On stage too, the quintet has consistently earned acclaim and support, touring and playing in over ten countries along the way. It was with the release of Rock’n’Roll Martyrs on I Sold My Soul Media, after band founder leader/vocalist Tor Abyss had returned back to his homeland of Germany, that broader and stronger spotlights caught on to the bruising and rousing sounds of the band. Recorded with producer Andy Brook, the album drew strong acclaim and keen attention; success the Hamburg based Lucifer Star Machine, with a new line-up, is ready to ignite again, starting with Eat Dust. 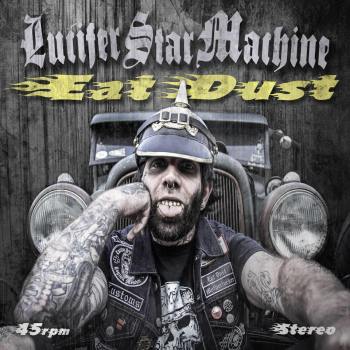 Eat Dust quickly grumbles with bass and riffs; simultaneously stirring with attitude as an aggressive intent is accentuated by the brewing anthemic antisocial heart of the song. The bass of Alex Low End continues to growl, its rumble pierced by the scything beats of drummer TJ Riot as Abyss shares his cantankerous confrontation. In no time the guitars of Doc Loocke and Fritzkrieg are entwining and searing things with spicy grooves and sonic flames respectively, the pair casting a bluesy punk ‘n’ roll web around raw riffs and thumping rhythms. Like Turbonegro meets Dead Kennedys meets Grumpynators, the track brawls with the senses to addictive effect.

Accompanying the track is B-side Stabbing Romance, a track cut from the same aggravated cloth with its own intrusion of contagious hooks and abrasive enterprise building to another irresistible chorus to get quickly involved in. There is a lighter Generation X/ early Misfits essence to the thumping devilry working away on ears and emotions in a no holds barred rocker to rigorously scowl and punch air to.

Lucifer Star Machine has a sound which is unafraid to openly use its inspirations whilst creating its own character and the two songs making up Eat Dust are no exception. That character though has an individuality which steps out and grabs attention by the throat. The result might not be something major in originality but in pleasure and incitement it irrepressibly earns big plaudits.

Eat Dust is out now as Ltd Ed 7″ vinyl and digital download via Wolverine Records. 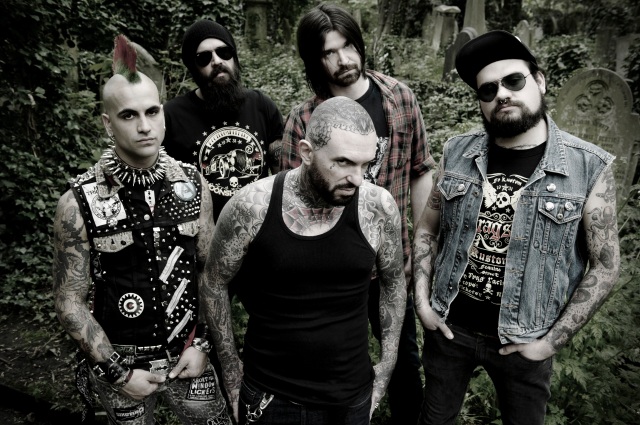 Caked in the filth of life and the passion of instinctive rebellion, Rock ‘n’ Roll Martyrs the new album from UK antagonists Lucifer Star Machine is quite simply unbridled, uncompromising punk n roll. From first violent note and lashing syllable through to its last vicious squall on the ear, the twelve track assault is nothing less than dirty hunger driven confrontation, but a fusion of punk and heavy to hard rock which leaves satisfaction greedy and thrills a plenty. With their third album the band is presenting the sound and merciless energy they are renowned for but have taken it up many levels of contagion and impacting persuasion to unleash their most potent and enjoyable moment yet.

Hailing from London, Lucifer Star Machine has left a legacy of destructive pleasure in their wake from live performances and releases. From intimate sweat drenched halls to festival stages across over ten countries the quintet has challenged and ignited audiences alongside the major names of punk rock whilst from debut album Fire In Your Hole in 2005 and its successor Street Value Zero four years later the band has marked out a portion of genre territory for their furious sounds. Released via I Sold My Soul Media and recorded with producer Andy Brook, Rock’n’Roll Martyrs stirs up the air, senses, and appetite with a blaze of corruptive addictive sounds which plays like the anarchist offspring from a union between Generation X, Turbonegro, and  old school Misfits. It is arguably the most accessible album the band has unveiled and certainly the most unforgettable and incendiary.

The riot begins with Hold Me Down, a fire which offloads a crucial groove spiked with intensive hooks from its opening breath. Often leading and never far from the surface of the song, the lure is as insatiable as it is addictive and twists lustfully around the ear as riffs and rhythms flail the atmosphere and tight sonic melody soaked invitations spark into an anthemic chorus and group calls which further capture the imagination. It is a magnetic tempest of a start which breeds real hunger for what is to follow, especially with the charge and inventive flames sculpted by guitarists Dave Malice and Laughing Boy Fernandes. 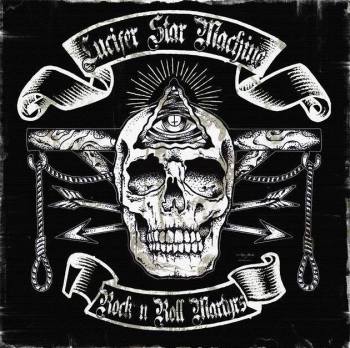 up and transforms it with a Misfits/Danzig like intimidation. The vocals of band founder Tor Abyss snarl with contempt and force whilst his clean delivery only adds to a great alluring presence. The merger of all that melodic swagger and feisty intensive rhythmic, riff, and vocal abrasion leaves a potent persuasion which has feet and throat in unison more often than not.

Through the old school bred Hammer Me Dead with a more caustic hardcore delivery from Abyss raging over the excellent cantankerous rhythmic testing of new drummer Txutxo Krueger (formerly of Last Resort and Total Chaos), and the irrepressible fist pumping anthem Death Or Jail, the album continues to ignite the passions and an instinctive fight within thoughts whilst the initially Clash like For Reasons Unknown, where the bass of Crusty Chlamydia coaxes in the imagination with ease, explodes another level of satisfaction and temptation upon Rock’n’Roll Martyrs. Evolving into a virulently catchy and dramatic treat, the song has elements of The Damned and New York Dolls to its stomp adding further adventure and variety to the album and pleasure.

Both Poison Arrows and Dead And Gone leave a pleasing taste on the palate, if without managing to reach the heights of the previous tracks. The first has a more restrained and poised gait though it does not lose any energy and impact in relation to its predecessors whilst its successor is a undefined smog of garage rock with a scuzz lining that intrigues and satisfies yet like the song before lies pale against the stronger elements of the release. Dark Water also lacks the spark which made the first half of the album so magnificently imposing and commanding but nevertheless has attention and appetite eager to consume and join its mission to provide honest ear barracking rock ‘n’ roll.

The malevolent Cancer Daddy pushes things back towards the thrilling peaks of the album, the song another breath stealing storm of anthemic bait and enterprise making way for the sinister charms of The Curse. It is a more than decent encounter which makes a good appetiser for the tempestuous excellence of Rotten To The Core, a furnace of middle finger attitude and punk confrontation which in its one minute twenty lays waste to the senses and emotions showing the emerging young punk bands how it is done. Explosive and bloody-minded, the track is another pinnacle to the album.

The closing I Hate You Forever leaves one final punk infested fight upon the ear, the Sex Pistols tinted riffs and hooks wrapped in a hard rock assault with rapacious sinews. It is a strong end but does not steal memories from the song before and earlier triumphs ultimately. Lucifer Star Machine offers punk ‘n’ roll at its dirtiest accomplished and weighty best, and Rock’n’Roll Martyrs their pugnacious call to arms.