Last year, like for a great many, attention was pricked by We claim this aria, the debut EP from Swedish band St. Aria. It was a potent and potential laden offering which at times strikingly sparkled and in other moments simply provided an enjoyable proposition without lighting fires. It did though ignite an appetite for the band’s inventive ideas and the next stage in its evolution. That next chapter has arrived with the release of the August 21 EP, an evocative and vivacious encounter building on the qualities of its predecessors and realising the previously untapped but hinted at qualities of the band’s sound. Consisting of five adventurous and lively propositions, the EP is the sunrise of a sound and band coming of age, but still with more to come and discover.

St. Aria is the creation of lyricist/composer/keyboardist Alexander Platon, a project formed in the late 2000s which after a hiatus when Platon joined The Borderline Saints, returned in 2012. Taking inspirations from the likes of Evanescence, Within Temptation and Nightwish and guided by the intent to create emotionally resounding rock ballads, the Platon linked up with vocalist Jimmy Ferhm, also of The Borderline Saints and producer Emanuel Svensson to resurrect St. Aria. Initially it was just to remake a couple of the band’s early songs but such the interest in its members and fans things evolved. We claim this aria was the debut release and saw the three enlist numerous session musicians for its creation and subsequent live appearances. The EP certainly awoke good interest but as suggested earlier everything has grown and leapt forward with August 21. Firstly St. Aria is a complete and stable quintet, Platon and Ferhm joined by Oliver Sandberg (drums), Erik Jönsson (bass, vocals), and Jacqueline Hansson (vocals), whilst musically the raw edges and arguably success tempering aspects of the previous release have been resolved and woven into songs simply revelling in melodic beauty.

The EP opens with the spellbinding Black Rose, a song which instantly has ears and imagination involved through the evocative keys of Platon, and increasingly seduced by the siren-esque tones of Hansson emulated in potency by those of Ferhm. Rhythmically the song is reserved yet striking enough to support the expressive narrative of vocals and piano as they colour the song with feisty elegance. It is a catchy and welcoming start to the release matched by the contrasting shadow wrapped presence of Deception which follows. Led by the mellow yet angst lined tones of Ferhm, the song cradles ears and thoughts in a provocative embrace of emotional balladry. The drums of Sandberg create a brooding drama behind the core refection of voice and piano, an almost epic shadow aided by the equally haunted lure of Jönsson’s bass, whilst all combined leaves attention and pleasure easily entranced.

A great bass growl opens up Here With Me, its darker presence soon smothered by the radiant light of keys and the paired vocals of Hansson and Ferhm. The song has a much lighter smile to its tone and character than its predecessor, a hope fuelled romance flowing through the nimble fingers and invention of Platon and the increasingly enjoyable vocal union, though all attributes reach new heights in the outstanding Hopeless Case. Strings and voice align to a tantalising tinkle of keys to seduce the senses from the song’s first breath and immediately has the appetite licking lips. As it opens up its energetic embrace, a country spicing and folkish revelry joins the inescapable infectious persuasion on offer whilst the duet of voices spills melodic contagion. Thoughts are conjured up of The Only Ones single Fools which saw the band and vocalist Peter Perrett link up with Penetration’s Pauline Murray in a mouth-watering duet, and though musically different, the textures, charm, and catchy quality is similar and just as impressive on the EP’s best track.

August 21 closes New Dawn, itself on a par with the previous song through the ever reflective and impressive vocals where this time Hansson leads the temptation with her seductive delivery. Shadows are never too far from the surface in most St. Aria songs, and here bass and keys bring a complimenting emotive shade to the golden tones of melodies and harmonies, a blend emulated in the lyrical prowess of the track. It is an enthralling end to an excellent encounter in which St. Aria has breached a new plateau in songwriting and sound. The band has pushed itself and sound to fulfil early potential and more, but now with a suggestion that there is even more within them to come it is fair to say there are exciting times ahead for them and us. 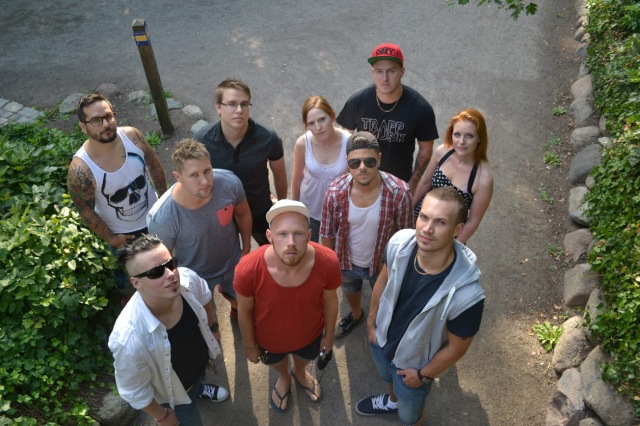 We claim this aria team, photo by Malin Brandt

Weaving inspirations from metal, pop, and melodic rock into emotive metal ballads, St Aria make a potent introduction for themselves with the We claim this aria EP. Consisting of five piano led reflections and one feisty rock encounter, the EP is a striking proposition for thoughts and emotions to contemplate. It is a little mixed in success, often raising more questions than it has immediate answers for, but from start to finish and especially given plenty of attention, the EP emerges as a pleasingly refreshing and intriguing prospect.

St Aria is cored around Alexander Platon (piano, lyricist, composer) and Jimmy Ferhm (vocals, composer and guitar) who united with the intent to explore and evolve in a number of different styles through music marketing, live performances and studio recordings. Bringing in numerous talented musicians to collaborate in and realise their creativity, the pair set about recording We claim this aria at Sonart Production. The project itself began in 2012 with Plato, though initially a constant movement of members saw the band take an early hiatus with its founder himself joining The Borderline Saints. With Ferhm the vocalist of the same band and producer/bassist Emanuel Svensson, the trio resurrected St Aria taking inspiration from the likes of Evanescence, Within Temptation and Nightwish into their intent. Initially meaning just to remake a couple of Platon’s early songs, interest and an increased enthusiasm for the project saw an expansion in the band’s aims and subsequently the recording of the new EP with the additional contributions of Andreas Centervall (guitar), Sofia Rapp (vocals), Hampus Jacobsson (drums), and Frans Af Malmborg (percussion).

The EP opens with the riveting Running, the magnetic piano skills and caress of Platon coaxing ears and imagination evocatively. The

twinned vocals of Ferhm and Rapp flow just as easily over the senses, aligning excellently together around the firm beats and melodic beauty which colours the passion of the song. It is a superb start to the release, a mesmeric and finely honed entrance by the band into a keen attention and an early appetite for their promise.

The following Her Song emerges on a just as potent and dramatic breeze of elegant and emotive keys, the hues bred by the piano a seed to the captivating rhythmic frame and vocal expression which again only impresses. With orchestral clad synth suasion and a reserved yet fiery glaze of guitar, the song though taking longer than its predecessor to convince, brews another absorbing premise and proposition. It is not as polished as maybe it could have been production wise and lacks a spark to truly ignite the passions, both something you can say about the whole of the EP, but the track still engages for a lingering and highly pleasing incitement.

Both By Your Side and Until Life Parts Us take thoughts and emotions on an enjoyable flight, keys and orchestral ideation making a seamless fusion with, especially in the second of the two, a rawer rock graze of guitar. Again neither quite inflames as the first does so easily but with the harsher side of the songs staying on the metallic side of melodies whilst leaving the enchanting to the piano and vocal harmonies, the pair given time evolve into captivating aural paintings for thoughts to explore and emotions to embrace.

Another Symphony is initially led vocally by Rapp, her sirenesque tones courted by the pungently persuasive piano charm of Platon and again melancholic stringed spawned keys. With layers of melodies and the assisting tones of Ferhm adding the right shade of shadows to the beauty, the track is a delightful warm kiss upon the senses to keep attraction for the EP high.

Final track Fly Away merges hard rock and rap into a symphonic canvas of sound, fusing numerous flavours and styles into an encounter which in some ways should not work but does quite successfully, though more concentrated rap using metal bands need not worry about a rival, not just yet anyway. With Jesper Svensson providing that rapping within the robust and vivacious electro/ melodic rock graced adventure, the track makes for a lively and stirring conclusion to a release which certainly nourishes thoughts and ears which are always in the mood for something different.

We claim this aria is arguably not exactly over flushed with new sounds but definitely offers a new ideation in its design and thought to awaken a strong appetite for St Aria. It will be interesting to see how the project evolves ahead but it is something definitely very easy to look forward to.

We claim this aria is available now @ http://staria.bandcamp.com/