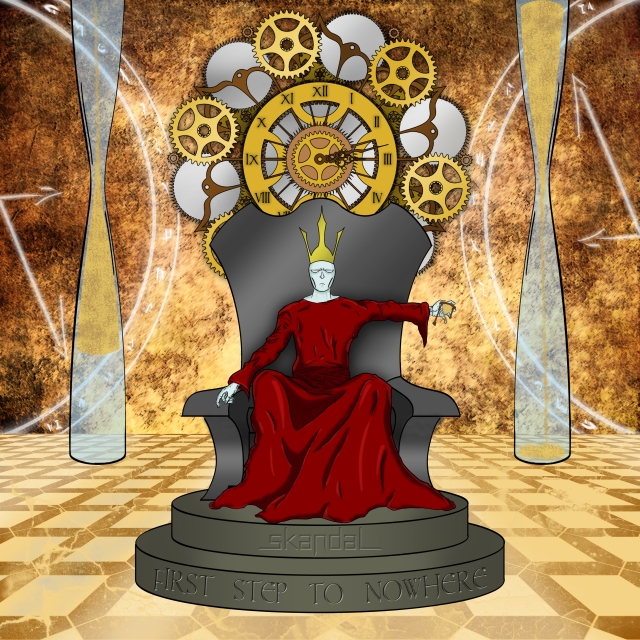 UK based Skandal has a sound you cannot exactly pin down to offer a definitive description of, such its mix of fluid and diverse flavours which emerge and flow throughout their songs, but it is one which leaves a long lasting full bodied taste. Their debut two track EP, or should that be single as it would be called back in the day, is a masterful blend of appealing toxins so intense that maelstrom is nearer the mark, but a creative tempest the Leeds quartet has complete control of. Reeking of promise as it makes its impressive introduction, First Step To Nowhere easily has the appetite and thoughts primed for whatever emerges next from within the band, with a sharp hunger to match.

Skandal began as a studio project of vocalist/bassist Giorgos Raphael Skandalakis to create and record his own ideas away from the constraints of being in a band. After recording his two songs in Athens, the tracks making up the EP, Skandalakis moved to England where he met guitarist Sam Tom Baker and drummer Sam George Thomason. The band’s first trio of gigs saw them playing in Iceland, Greece, and England whilst soon after the line-up underwent some changes with Paul Daly replacing Thomason. Second guitarist Cris Harisoulis was also enlisted; the musician moving from Greece to Leeds to bring the line-up to a quartet and also to help manage the band. Recorded before the band was fully formed, First Step To Nowhere is an adventurous release with songs you can just imagine leaving venues bristling with enthusiasm coated in eager sweat, something the four-piece is proving through their shows.

Opening on an avalanche of potent rhythms soon accompanied by guitar teases and a throaty bass call, first track King makes no delay in falling into a feisty stride of melodic enterprise and colour drenched riffs framed by an excellent rhythmic tantalising. It is a blaze of classic metal urgency and energy coaxed on by a great stoner bred enterprise and persuasion. Immediately the production on the song stands out, every element of sound and instrumentation allowed space and clarity to breathe whilst unleashing individual flames that unite perfectly for a stirring and captivating encounter.  Admittedly the vocals of Skandalakis are a little smothered at times but not enough to demote his strong tones to the background and hurt the track. It is a breath-taking furnace of craft and energy with the guitars and bass stealing the limelight but pressed firmly by the great rhythmic web being laid down. Once seemingly settled, the song reveals the unpredictable strength of the band and songwriting as it takes a side step into a less rabid but equally as intense and maybe darker turn of imagination. For personal tastes the jagged stops and starts do the song no favours but are soon forgotten as the track twists into another burn of creative inspiration which sizzles and flares through to the end. It is a treat of an encounter which alone spawns great positivity towards the band.

Second track Distance opens with a sultry Mediterranean air and almost sirenesque persuasion of guitar and beckoning percussion, the welcome inviting the imagination and emotions to paint their own ideas before it reveals its own narrative which like its predecessor is related to the concept of time and death.  Once it has unfurled its sinews and muscular intensity there is an overwhelmingly darker presence and passion to the song compared to the opener, a death metal seeded voraciousness driving riffs and drums whilst vocally and melodically the song is wrapped in reflection and heart borne contemplation. As in the first, a continual evolution and shift in the gait and presentation of the track makes for an enthralling and magnetic confrontation, whilst the adventure of the music and its composition leaves surprise rife and satisfaction complete.

A release which also increases its power and depths with each visit, the songs seeming to find new absorbing things unveil each time, the First Step To Nowhere EP is a very impressive first step for a band you can only assume to be hearing and enjoying a lot more of in the future.