Paid To Fake It from UK electronic conjuror Conformist is one of those treats which is near on impossible to describe, a tall order to give a representation of to others in words, and ridiculously easy to be infected by. The album is a wonderfully schizophrenic patchwork of sounds and a raging maelstrom of energies and textures which leaves one on the edge of sanity and deeply enveloped in a consumption of for want of a better word, brilliance.

The Cardiff based Michael Simmons, the man behind Conformist, first lit our fires with his single Savages Go Modern!, the track which also opens up the album which is released August 6th. The track drew great attention and acclaim as well as strong radio play and coverage which the album is sure to reinforce and explode. Simmons is a master at manipulating and layering sounds and samples into perpetually evolving aural creatures. He uses unexpected and startling noises in unison with samples from the likes of cable TV shows, shopping channels, talk shows, pornos, and the lower end of TV, to create destructive and constructive not to mention provocative mental intrusions. It is more than just cutting and pasting these things together though, his mastery ensures the pieces come alive and breathe with individual intent and attitude to create an overall journey of stark reality and suggested crumbling futures. The great thing is you can interpret things to your own thoughts and visions, so if the intent of Conformist evades recognition at times there is an equally impactful personal premise forming in its absence.

Savages Go Modern! riles up the senses from the off, its apparent disentangled elements fused perfectly into an edgy 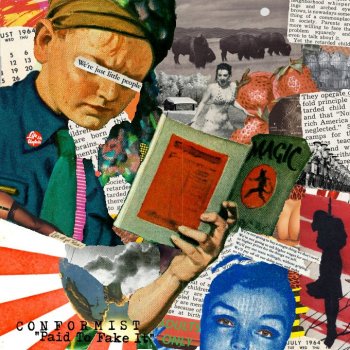 cluster bomb of magnetic blisters. From punk scuzzed guitar scrapings to post-dubstep baselines the track triggers imagery and thought whilst laying an infectious canvas to unleash the body upon.

It is an outstanding start instantly backed up by the spitting industrial ambience of Big City Buzz Band and the senses distracting punk fuelled Ladybug Ladybug. Both tracks are immense and build on the excellent opening with their own individual distressed soundscapes. Think the likes of Throbbing Gristle, Aphex Twin, Mindless Self Indulgence, and The Art Of Noise and you get a whisper of what triumphant goings on erupt within the walls of Paid To Fake It, but you can also add flavours from anything from Pere Ubu to The Fall or Pop Will Eat Itself to Ministry to the expansive palette the album explores and corrupts beautifully. The release plays like a further mutated soundtrack to an Eraserhead no more so than on the second of this pair, its presence a prowling expulsion to falsehood and safety. It is a glorious sonic mind fuck to willingly submit to and let shatter the world and its balance spiralling.

If you look under the industrial tag and genre there are a lot of bands which really are just abrasive metal/rock bands at most but something like Paid to Fake It for us is a truer entrant to that sphere. It distils and then further corrupts the sounds of life and an estranged world into an apocalyptic like honest distortion which offers irresistible contagion with a festering underlying truth. Tracks like Post Death Sales Spike and its manipulative deceitful world and Mr Grosse and Mr Playfair with its arcade/computer game trickery expose and assault the ‘misadventures’ of modern society to inspiring effect. Of course as mentioned things are individual in interpretation and it is that quality as much as the sounds which make for a powerful involvement.

Further highlights like Schrodinger’s Cat and Panic Buying continue the album as a mesmeric and disturbing treat. By the end one is breathless with a torrent of ideas and thoughts raging inside. Paid To Fake s outstanding and though it will not be for everyone it is essential listening to all who need something more than a good tune. It is experimental and unsettling as well as forthright and wholly satisfying. Conformist is an artist who understands and soundtracks the real world better than any other.