We are always up for an artist letting their music do all the talking compared to others which spew suggestions of being the next best thing then bringing disappointment with a formula or uneventful sound, but there are some who go too far the other way and do themselves no favours by being as secretive about themselves as an orgy in a vicarage. One such band is Swedish rockers Bear Bone Company, an outfit with a sound which takes ears and body on an invigorating ride but keeps pretty much silent when it comes to self-promotion. With a stonking self-titled debut album recently unleashed via Sliptrick Records making a rich roar though things hopefully will become livelier for and with the band, a result the powerhouse of tenacious rock ‘n’ roll certainly deserves.

What we can tell you about Bear Bone Company is that they come from the Örebro area of their homeland, were formed in 2012, and now have a line-up of guitarist/vocalist B.K., bassist/backing vocalist J.Martin, and drummer Knauz. Their sound is a healthy blend of classic and modern heavy rock with spices of metal, and their first album is produced by Ronny Milianowicz (Dionysus, Sinergy, Saint Demon). More we cannot say but that is fine as the album is worthy of all the attention anyway. 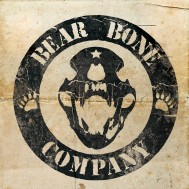 It opens with Fade and instantly has ears entangled in a tasty groove within firmly probing rhythms. Bass and guitar only increase their individual lures as the song expands to embrace the impressive tones of B.K. and the rousing air of the song. As to be heard across the album, there is something familiar to the band’s sound, the likes of Theory Of A Deadman and Black Stone Cherry amongst a few brought to mind, yet as the song shows there is a fresh and rich edge which is distinctive Bear Bone Company, the outstanding Kiss N Tell swift confirmation. The second song enters on a grouchy rhythmic and spicily sonic stride, relaxing into a more recognisable prowl soon after whilst still retaining its initial irritated nature. The band crooned chorus offers additional Poison meets Velvet Revolver like revelry but it is the antagonistic side of the mighty song and its searing flames of guitar which stirs the imagination most.

Both the excellent Don’t Belong and the rigorously enticing Burkitt Lymphoma hold ears and attention tight, the first with a more controlled and even tempered hard rock character wrapped in fiery textures and enterprise and its successor through a steamy wash of guitar and again fearsome riffs. The latter though also slips into a more comfortable melodic prowess and catchy endeavour to keep its body unpredictable and fascinating. Once more major surprises are scarce but there is no escaping the sound is gripping and all Bear Bone Company.

The anthemic blaze of Down In Flames provides a stirring incitement next, B.K. as vocally strong and impressive as ever as the song stalks the senses and treats the ears with its bluesy intoxication whilst Bear Bone rocks like a predator in heat, grooves and riffs casting a primal rock ‘n’ roll swing as the bass venomously snarls. Both tracks hit the sweet spot before the predacious allure and presence of Way Back Home casts its sonic web over the imagination and by now a fully eager appetite for the release. Every track upon the album is in some ay a fire of anthemic tendencies, this one more of a smouldering pyre of enterprise which burns its way into the memory and a lingering appreciation.

Drinkin’ Time stomps with zeal loaded rock ‘n’ roll next, its easy presence not living up to what has come before yet still leaving satisfaction keen whilst Hangin’, another maybe promising more than delivering for personal tastes, strolls along with an infectious nature and accomplished body to easily please. Neither quite catches the imagination, though it again is just individual tastes involved, and both overshadowed by the emotive weight and call of Fallin’ Down. Its tangy grooves and persistent riffery is simply flavoursome bait alongside a similarly weighty lure of vocals, all spun around the potent rhythms of Knauz to strong success.

The final pair of songs upon the album add further tinder to its fire, Life’s About engagingly tangling classic rock and metal with soaring vocals and prowling rhythms whilst Suicide canters through ears with attitude soaking its intent and an inner fire fuelling its punk/heavy rock ‘n’ roll predation. It is a tremendous close to a rather potent and thoroughly agreeable encounter, an album easy to keep returning to and roaring along with to the neglect of others.

Hopefully the release and assumes success of the album will inspire Bear Bone Company to reveal more of themselves and even more so push their presence into the faces of potential fans as there are surely plenty of unaware heavy rock appetites waiting to be fired up by the Swedish trio.

The Bear Bone Company album is out now through most online stores via Sliptrick Records.