Basking in the sultry heat and sweltering ambience of Bones In The Closet, the new album from Norwegian narrators of scintillating murder stories and rapacious shadows Helldorado, the overriding thought whilst within its seductive devil spawn arms is that you are being cradled by one of the major contenders for album of the year. The twelve track release is sensational, evocative beauty and dark intent saddling the senses for a Tarantino/ Morricone sculpted ride of the purest pleasure and imagination.

Bones In The Closet is the fifth album from Helldorado and again draws on a startling and provocative mix of blues, country folk, rock, and shadowed misdemeanours with a stroll through Mexican deserts and tequila soaked climes for this release. As across their previous releases the cinematic lures of their music is as potent as its sensory incitement and here leaves the listener perpetually wiping the dust from their eyes and pulling their mental stetson/sombrero down whilst chewing on a cigar Eastwood style. There is strong diversity running through the release too though, from walking through the smokey hauntings of a hanging man scenario down in the south you can find yourself breaking into a garage rock soundtrack to a Russ Meyer film or a blues bar atmosphere with whiskey in hand. It is a thrilling and evolving encounter which with essences of the likes of Johnny Cash, Tom Waits, Nick Cave and Stan Ridgeway joining those of Mariachi El Bronx, Guano Padano, or Dennis Hopper Choppers, never gives the passions a moment to grab their breath. 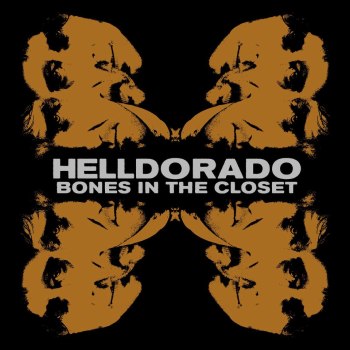 Jackman (drums, saw, percussion), immediately cast the long arms of the sun onto the neck with opener Gallow´s Bird whilst sizzling the surrounding air with a blaze of brass persuasion from the trumpet of Ole Ellingsen which springs from an instantly inviting drum burst. The guitars gather in the senses with devilish temptation whilst the bass of Wassvik adds its individual prowl to the dawning scene soon narrated by the excellent tones of Vagle. Passionate and soulful he bellows out with emotive glory whilst the guest backing vocals of Pål Jackman play co-conspirator in drawing thoughts deeper in to the compelling song. Virtually dripping sweat from the humid embrace driven by vocal and musical fire, there is an instantaneous ardour bred with the track such its intensive might and rasping charm.

As the following Misery And Woe boldly steps forward with melodramatic keys framing the door into its expressive heart and Vagle cast his spellbinding delivery upon the ear again, it still is hard after many listens to the album and previous tracks that the band is Norwegian. They make the likes of Chris Issak sound less American than Helldorado and it just enriches the imagery and adds the deepest depth to the transportation of thoughts into their aural paintings. The second song is a slowly burning reflection of despair and regret, the tale of an unavoidable destiny with thick emotion swamping every syllable and melodic beauty from the cursed soul.

Dead World with its garage rock stomp switches the scenery for a sonic kaleidoscope of psychedelic colours and mutually vibrant emotions, the keys dazzling the ear whilst the guitar twists and turns with melodic enticement. With harmonic squalls thrilling with rich textures of The Stones to their crowd and The Doors like bait of the keys, it is a raucous and vital storm of blistering joy and an exciting temper between the surrounding songs. Its successor John McMiller like the second song on the release is a powerful and demandingly evocative piece of songwriting and staggering realisation. Another dark hearted soul laying open his past and looking for an end to his life’s previous purpose, the track carries his declaration forward on a gait which is a shadowed romp, its lively surges breaking out from more restrained and arguably redemption searching melodic caresses though the centre of the tale is not asking for such. It is another varied and staggering discharge of invention and imagination which is rewarding with further rapture from the heart.

Only four songs in and no more convincing is needed to the triumph before the ear but the release just continues to exhaust the passions, the likes of the feisty and magnetic Please Come Back which again features Pål Jackman on support vocals, the brilliant and irresistible Times of Trial a true authentic  mariachi classic, and the title track with its muggy noir corners and western sparks, continuing the impossible addictive influence of the album whilst Two Headed Horseman with its garage punk tipped crescendos within more sun-baked glamour and the sixties lilted road trip of ´69 Camaro just rip further furnace hot lust from the heart in their and the album’s direction.

Completed by a final trio of brilliance in the haunting Lost Highway Motel a place home to lost souls of all inclinations, the black tale of love and violence Johnny´s Song, and a delicious version of the Morricone piece Sixty Seconds To What?, there is little left to say but sigh like an overfed diner and declare Bones In The Closet one of the major highlights of the year so far and will certainly be acclaimed so by the closing of its eyes too. With a mention also for the slide guitar contribution on the album from Ry Krüger required, this is a release everyone should dive into without reservation, and Helldorado a cemented lustful passion for this site. 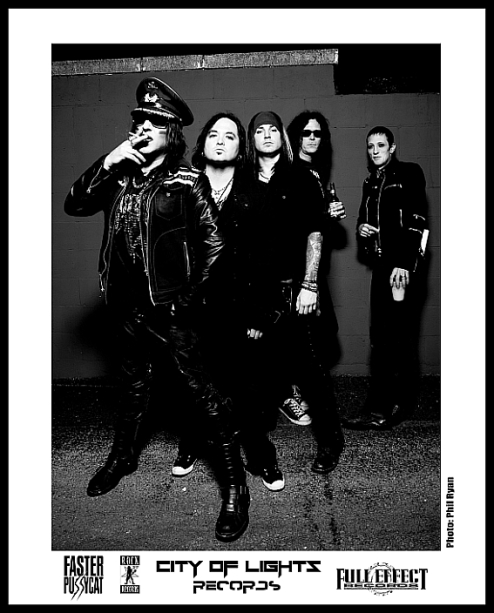 The Power & The Glory Hole is the first release of new material from Hollywood sleaze rockers Faster Pussycat since its return in 2001, and a release which despite its flaws just leads to mischievous satisfaction. The band is one which for many is a love or hate relationship whilst for others like us their earlier presence largely was ignored due to a lack of connection with their glam/sleaze flavoured hard rock. The new album though finds the band evolved into a heavily spiced industrial rock n roll which points to the likes of Dope and Marilyn Manson, and on certain points on the album, Jane’s Addiction.

Formed in 1985 and taking its name from the Russ Meyer cult film Faster Pussycat! Kill! Kill!, the quintet of Taime Downe (vocals), Greg Steele, (guitar), Brent Muscat (guitar), Kelly Nickels (bass), and Mark Michaels (drums), soon grabbed attention with their self-titled album of 1987 and two years later gold album, Wake Me When It’s Over. The band subsequently split in 1992 with Downe forming the Newlydeads. In 2001 though he resurrected Faster Pussycat with a more rock driven sound and the band soon released Between The Valley Of The Ultra Pussy, a collection of industrial remixes of the  early songs produced by Downe, and spent the next years touring and thrilling audiences. With a line-up now of Downe, Xristian Simon (guitar), Ace Von Johnson (guitar), and ex- L.A. Guns members Danny Nordahl (bass) and Chad Stewart (drums, percussion), the band has stepped forward with further evolved material and sound and it has to be said it is quite a blast.

Released via Full Effect Records in the US and City Of Lights Records in Europe, The Power & The Glory Hole takes no time in

making a convincing persuasion with opener Number 1 with a Bullet. The track introduces itself with bulging rhythms and scything sonics from the guitars which immediately lures an interest in its offering. Settling into a sinewy gait and fiery energy, the vocals of Downe dance over the ear with a gruff devilment whilst riffs and basslines tease and incite boisterous responses. Wholly infectious with its acidic groove and undemanding chorus, the song is easy meat for the ear to revel in, recognisable rascality which is irresistible. That also about sums up the album, there is nothing new or adventurous to it just sounds and ideas plenty of others have exploited but Faster Pussycat make it an aural shenanigan you do not want to avoid.

From the terrific start the equally addictive Gotta Love It with its repetitive pawing riffs and cyclonic grooves continues to excite the senses, the tempting chorus and unbound flurry of hooks virulent and again impossible to resist adding voice and agitated limbs to. Two songs in and there is not much more convincing needed to make the album one which will make many returns before the ear and even though it does ebb and flow in success across its twelve tracks, there are no actual disasters waiting to loom into view. The following slowly strolling Useless is one of the moments though where things hit a lull, the admittedly easily assessable and enjoyable track failing to hold or ignite any fire with its presence. It is arguably the most industrial toned track on the album and wins on variety and intent but just does not spark like some of the other tracks.

Something the songs Sex Drugs & Rock ‘n’ Roll and Hey You do not have a problem with achieving.  The first is one which brings rich essences of Jane’s Addiction to a hard rock swagger for another transmittable aural contagion whilst the second rampages with a grinding abrasion and snarl to its energy, riffs, and baselines whilst the drums create a frame of jabs and crisp uppercuts any middleweight would be proud of. The guitar flames add extra heat and transfixing persuasion to the song and again it is hard to tear oneself away from its eager and easily satisfying clutches. Splitting the pair Disintegrate and a cover of These Boots Were Made for Walking play nice without again raising any temperatures but are still decent enough songs to catch a lingering stay.

Completed by the wanton blistered seduction of Porn Star, the biting title track, a fiery cover of the Betty Blowtorch song Shut Up & Fuck, and a closing tribute to the late Bianca Butthole, a close friend of Downe, called Bye Bye Bianca, the album makes for a dirty brawl of a party, a sonic binge you are welcome and will want to gate-crash. For sure The Power & The Glory Hole takes easy familiar routes in songs for the main and lacks uniqueness but it still makes a more than appetising encounter which gives voice, feet, and mischief an excuse to riot.