Listening to A National Service, the debut album from Scottish electronic pop duo Capitals, you cannot help but think we will be hearing a lot more of and about the band in the future, near and distant. The release is a melodically fiery and hypnotically elegant treat, an imaginatively smouldering fire of thrilling enterprise that consumes and ignites ears and thoughts.

Comprising of Angus Carbarns (ex-The Cinematics) and Keir MacCulloch (ex-Araya), the pair forming the project in 2009, Capitals has already forged an impressive name for themselves over the past eighteen months or so. Headlining shows within the UK, Germany, Belgium, and The Netherlands have brought the band to the awareness and acclaim of a great many whilst performances across festivals such as T in The Park, Rockness, Underage, Summer Fest in the US, have only accelerated and elevated their stature and presence. Now A National Service brings their refreshing and thoughtful blend of electronic warmth, pop energy, and evocative atmospheres to another plateau of visibility. Such its strength and captivating breath expectations can only assume that it will be the trigger to a full and lively horizon for the Edinburgh band.

From the ruffled atmospheric intro Tall Tales, a piece of distressed ambience fused with smouldering melodic potency, the album 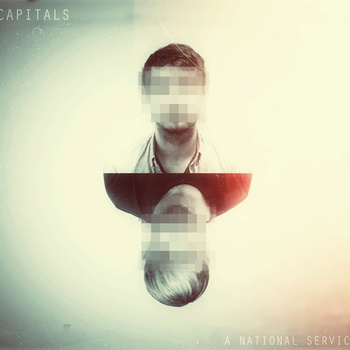 sets the senses alight with the outstanding drama of The Hollowing. With a seductive call from the vocals and the melodic teasing of guitar of Carbarns, the song teases and entrances the ear whilst a moody bass like croon and throaty electro energy conjured by the keys of MacCulloch rummage through the set in warmth and elegance. It is a magnetic persuasion which leaves no room for restraint in appetite for its creative sounds.

The following All These Years with an individual gait and temptation continues the dazzling and inviting start, its smouldering energy a stable yet eager brew behind the again smooth and enticing vocals, the harmonies mutually tempting alongside the melodic kindling offered by keys which erupt into a blaze of enveloping irresistibility. As if this was not persuasive enough the album does not rest on its mighty laurels instead unveiling the wonderful Jealousy and its gentle melodic caresses around emotive flaming provided by guitar and vocals. As with most songs on the album, there are slight shadows leaving their taste either lyrically or musically, their whispers falling and playing within the hazy warm weaves. It is often an understated element but each repeat dance with the album reveals a little more as well as more of the exhilarating craft to the songwriting and its realisation.

Both Global Marine Breaks and Sinking Ships explore further diverse and unique corners of the sound whilst laying out new levels of passion in return, the first with its psyched out ambience of cacophonous colour and light. Verging on disorientation the track is a discord flavoured warped waltz of energy and beauty, an instrumental which triggers a myriad of thoughts and emotions. Its successor carries on that same spice to tempt within its provocative background whilst the foreground of the song is a warm tide of vocal narrative and melodic conjuring coaxed into a sultry call.

Through another heated evocative stroll from Hello World and the intrigue veined Reliever, a track that is rife with visual and personal espionage, A National Service plays the passions and senses like a conjuror, though no slight-of-hand or illusion brings any deceit to the aural soul bearing, whilst via The Grace it bewitches with heart seducing beauty.

A Spectre Is Haunting Europe takes the listener on a final romp through electro temptation; its eighties spawned energy and mischief recalling the likes of Blancmange and Visage but filtered through a depth of shadow and intensity for an impossibly infectious and scintillating enchantment for body and soul. The final word from the album then comes from An Ode To An End, a low key track in comparison to what came before yet as full and captivating as any of the more layered and energetic songs. It is a delicious conclusion to a mightily impressive and enjoyable release.

A National Service will make a lingering mark upon the year and be the recalled as the moment we witnessed and enjoyed the full arrival of Capitals on UK music.