Having enticed and fascinated with debut single Revelator, Boy From The Crowd does it again with first EP Where The Bees Come To Die. As the single, it is a release bred from a varied mix of blues, punk, and diversely seeded rock ‘n’ roll honed into songs which arouse attention in sound and lyric with accomplished ease. There is no intent to polish things smooth either; each track offering its raw and honest heart to add to the individual drama and potent enterprise on offer. The result is an increasingly tempting proposition which has moments that simply transfix and always has a persuasive hand on thick satisfaction.

From London, Boy From The Crowd consists of vocalist/guitarist/songwriter Vinny Piana and drummer Vegas Ivy, kindred creative spirits which upon linking up were “determined to be guided by their primal instincts and play music with guts, spirit and uncompromising integrity”, subsequently embarking on “a fearless mission to discover tough new ways to rock the blues.” In strong evidence of their purpose and its success was the highly riveting and pleasing Revelator earlier this year, a song still as striking and magnetic now opening up the pair’s first EP.

The song opens on a twang of blues soaked guitar, it’s tempting a spicy lure into the incoming stroll of firmly hitting beats, throaty bass coaxing, and a vocal offering as fascinating and raw as the sounds around it. In no time the song has attention locked in and an appetite inspired for the captivating invention shaping the blues rocker, its presence managing to reap a little of artists like Iggy Pop, Jon Spencer Blues, and Nick Cave to hone its own unique voice.

The blues hues of the opener are even more spicily intensive in the absorbing All I need, a track which atmospherically smoulders in dirty rock ‘n’ roll as tangy flirtation lines its grooves and hooks. As in its predecessor, twists and turns are a rapid captivation, blazes of melodic toxicity moving into filthy expulsions and contagious swaggers. At times the track plays like an antagonistic and off-kilter mix of Television and Tom Petty but once more weaves all essences into its own unique and partially psychotic adventure of creative tenacity and sound.

The Road takes over next, beckoning with an initial country rock kissed sway which soon blossoms into a punk infested roar, the song continuing to align both flavours as it spins a web of blues imagination through guitar and keys. The track is easily the biggest treat upon Where The Bees Come To Die, its blues punk temptation irresistible and another insight into the variety brewing within the songwriting and sound of Piana and Ivy, a diversity reinforced by the surf/psych rock blues of the EP’s title track. The instrumental is a blaze of alternating and entwining shimmering melodies and volcanic energy creating a canvas for ears and imagination to immerse in under the rich suggestiveness of keys, their caresses adding greater colour to the whole adventure.

Where The Bees Come To Die builds on the great introduction to Boy From The Crowd made by Revelator, casting its own highly persuasive hint to the emerging talent and sound of the band. It is early days but already expectations are leaning towards exciting times ahead with Piana and Ivy.

The Where The Bees Come To Die EP is out now digitally and on CD and Ltd Edition vinyl @ https://boyfromthecrowd.bandcamp.com/album/where-the-bees-come-to-die

Throwing blues, garage rock, and punk into a flaws and all slab of raw rock ‘n’ roll, UK duo The Boy From The Crowd make an intriguing and ultimately gripping entrance with debut single Revelator. The single actually embraces more flavours than mentioned in the last sentence, but takes that core into a wild and compelling riot of noise and attitude.

Consisting of vocalist/guitarist/songwriter Vinny Piana and drummer Vegas Ivy, The Boy From The Crowd on the evidence of Revelator, is not a band concerned with offering polished enticements but one driven by the rugged essence of dirt encrusted rock ‘n’ roll and the antagonistic tenacity of punk rock. Yet there is a vein of enterprise within the song revealing a definite thought bred resourcefulness to their sonic brawl which only adds to the success of the track. 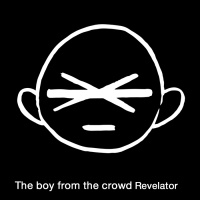 A lone guitar teases ears initially from within a raw and dusty sonic haze before the track erupts with thumping beats and a heavy bass coaxing bound in a sizzling wash of blues drenched guitar temptation. It is a raucous blaze of noise and intent but one with a rein to its assault which increases its potency and potential. Vocally Piana provides a delivery which ebbs and flows in success depending on which aspect you look at, but at the same time brings captivating character to the growing anthemic nature and appeal of the song.

With fire to the pleasing guitar enterprise and the rhythmic incitement of Ivy pounding emotions into keen submission, the track is an intriguing and wholly satisfying introduction to The Boy From The Crowd. Its raw charm wins over the imagination right away and with only the lack of the intimidating snarl it often hints at a niggle, Revelator is strong entrance from the band’s and potent teaser for their upcoming album.

The self-released Revelator is available as a free download now @ https://www.facebook.com/TheBoyFromTheCrowd/app_262920113912164