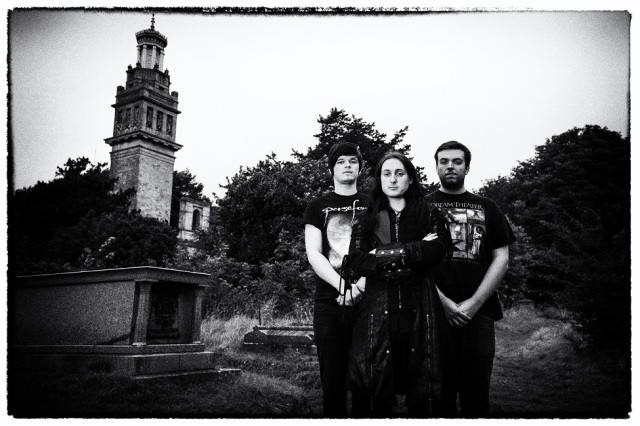 With influences to its breeding ranging from “70’s/80’s Rush and Genesis to more modern prog like Dream Theatre and Between the Buried and Me” it was hard to exactly imagine what the debut album from UK metallers Redshift was going to offer. It was an intrigue though rewarded with a release which was as unpredictable as it was fascinating and only increasingly enjoyable by the listen.

Their sound is tagged as progressive metal but that only gives one aspect of the Bath trio’s sound. It embraces extreme metal textures as easily and readily as melodic and classic hues, the band’s technical prowess just as ripe and open within the creative tapestry. For personal appetites there are moments which simply enthral and other times where the record merely held keen intrigue yet from start to finish Cataclysm held court on ears and attention and as mentioned with increasing success.

A concept album depicting the story of an invasion like no other around an engrossing lyrical thread based around honour, love, and a devastating apocalyptic event, the Ben Turner produced and Jamie King (Between the Buried and Me, The Contortionist) mastered Cataclysm easily lured attention with its opener, Overture: Something In The Sky. Immediately the technical craft of the band engaged; the guitar of Joshua Boniface casting a lure of intimation before showing its feral side alongside the driving rhythmic incitement of drummer Jack Camp and the rich lines of bassist/vocalist/keyboardist Liam Fear. The instrumental with its progressive suggestiveness effortlessly had the imagination weaving before the full force of Invasion descends.

The second track rises up from the formers portentous calm, almost hunting the senses and conjuring thoughts before rushing their barricades with vocal causticity amidst guitar spun wiring. The unpredictability and imagination of the band’s sound is soon properly unveiled, the song an aural kaleidoscope of flavours and sonic grains all designed to spread the tale and entice firm attention. Extreme and seductive textures continue to fluidly collude across the compelling proposition, the band’s progressive instincts seemingly honing the attributes of everything unveiled before Call to Arms stirred things up further with defiance and aggression. Yet it too brings an infectious melodic essence to its eruption, the mellower calms in between like the verbal and sonic narrator to the blossoming conflict. As the album itself both are tracks which reveal a little more by the listen, the richness of their narrative and bodies only thickened over time.

Promises provides a melodic amnesty to the friction, its unsettled piano crafted repose the calm before the storm, a tempest announced by church bell chimes and unleashed by the outstanding Fire, Smoke and Thunder. It devours the senses instantly, every angle of its attack carnivorous but equally voraciously virulent, ferocity and barbarous intent in league with dextrous progressively hued enterprise throughout. Easily our favourite track within Cataclysm, it tips a great potent release over into rousingly impressive if leaving the final pair of tracks the unenviable challenge of following its triumph.

Both May Fate Rest Upon You and The Last Stand may miss out rivalling their predecessor but both escalate the album’s appeal, the first with its classic hues over appetite nagging technical prowess and the closing track through its evocative atmosphere and expressive melodic radiance, a redolent beauty across a mercurial landscape which is never far from erupting and at times does so with rapacious agility and expectations defeating invention.

The final song also epitomises the unpredictable nature of album and sound, a core reason of its perpetual fascination and temptation and even after numerous plays we are discovering fresh things to chew on and enjoy within Cataclysm. Suggested as an album for fans of bands such as Opeth, Between the Buried and Me, and Dream Theater, Redshift has provided something well worth checking out for anyone with a taste for adventure.

Cataclysm is available now digitally and on CD @ https://redshiftband.bandcamp.com/releases