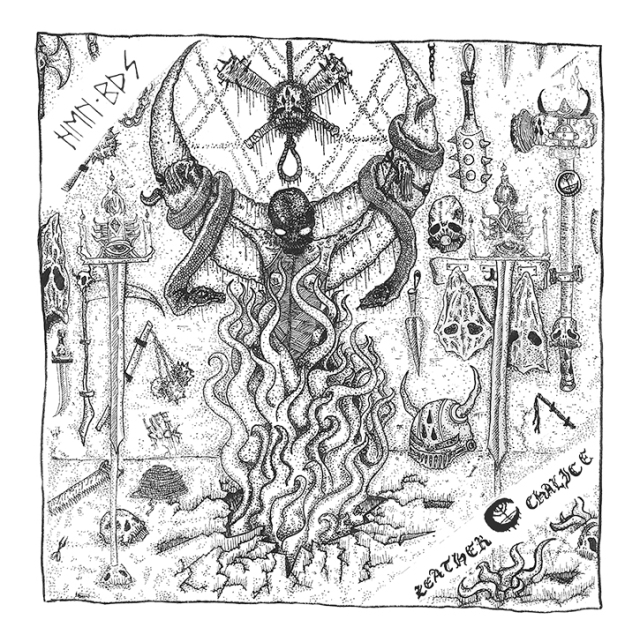 In a union to scar the psyche and corrupt the senses, Broken Limbs Recordings have unleashed a 7” vinyl split release between New England hailing Human Bodies and Leather Chalice, a hellacious proposal of pure black metal malevolence and rancorous hardcore viciousness. These are two bands building a potent name for themselves and they do their reputation no harm wit this intensively rabid encounter. The four-track EP is painfully corrosive and fuelled by creative hate, but if that is your recipe to bliss, then this is an encounter demanding keen attention.

The first two tracks come from the Boston foursome of guitarists/vocalists Terzakis and Gabe, bassist Jason, and drummer Dan, collectively known as Human Bodies. The band began in the October of 2013 as a studio project, developing over time into a fuller line-up and live presence to go with the well-received No Life cassette EP of last year. Just off of a successful full US tour, Human Bodies entangle ears in a rhythmic web as their first offering on the split, Only the Sigh feistily prowls into view. Energy and intensity continue to rise as a bestial bassline colludes with sonic hostility where guitars are ravenous and vocals raw intrusive squalls. It is an uncompromising attack yet has a swing and swagger to it which welcomes body and attention as much as its sonic trespass tries to defile them. It is lethal contagion and an outstanding start to the release which runs straight into a similarly alluring violation in the caustic shape of Malice Prepense. Repetitious beats and riffs again entice and spark a healthy appetite whilst a doomy cancerous breath smothers the listener to simultaneously temper the virulence but increase the potency of the whole malicious incitement.

Leather Chalice is the solo blackened punk project of Jann from Ramlord, who brings inspirations from Venom, Discharge, and “depression and 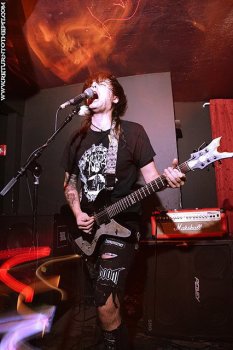 total defeat of the human spirit by modernism” into his ruinous tempests of blackened punk loathing. Good Intentions (Coming Home I) is his first offering, an abrasion of erosive and raw cancerous morbidity which is as fearsome as it is sonically compelling, whilst Last Gifts of Worship (Coming Home II) takes all the enmity of the previous song and twists it into an even harsher and surprisingly catchy enticing. Of course that infectiousness lies beneath a tsunami of ill-will and rancorous intent which to swim through is as painful as it is rewarding.

Only The Sigh might have emerged as just the favourite track here but between them Human Bodies and Leather Chalice uncage four dangerous and highly enjoyable onslaughts which fans of black metal, hardcore, and violent post punk should take a deep breath and dive deeply into.