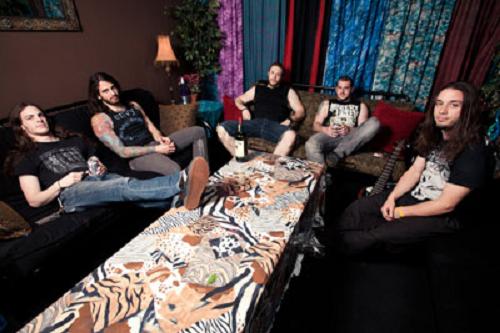 Job for a Cowboy return with a new line-up, new ideas, a continued evolution in musical maturity, and in Demonocracy their new album, one of the most formidable releases so far this year. The sheer power and quality to the songwriting and its realisation means that even if you are not a fan or the songs within the album do not grab you the musicianship and technical excellence is still unmissable and undeniable. Demonocracy is not a put on and listen once or twice and it clicks type of release, though for many it will do just that, this album demands your focus, attention, and at times your patience before divulging the ingenuity and excellent varied construct within the brutal onslaught it consumes with. 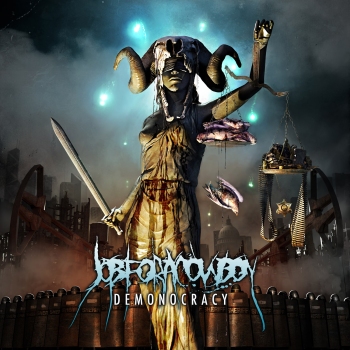 all aspects of the sound and songwriting of the Arizona quintet forward. From listening to Demonocracy it is evident there was no temptation to rest on their laurels even a little after such a strong and deep affection thrown over the previous album. For sure the change of personal has brought a natural change, the fact that songs now contain solos and at times the guitars take the lead suggests that, but there is an apparent organic shift too, a determined intent to find a further progression to themselves as musicians and the band as a whole.

The time between the two albums has seen the departure of guitarist Bobby Thompson and bassist Brent Riggs. Their replacements have not just come in to fill the slots but from the evidence on Demonocracy have instantly added a new dimension to compliment what their predecessors and the band had already impressively created. Cephalic Carnage bassist Nick Schendzielos and session guitarist for Despised Icon Tony Sannicandro initially were brought in as touring musicians but the chemistry that was immediate from playing and the songwriting ideas they brought into the band on the 2011 Gloom EP saw the arrangement become a permanent one. Alongside vocalist Jonny Davy, guitarist Al Glassman, and drummer Jon “Charn” Rice the pair has added a different dynamic which has also created another within the band as a whole to make their new release something that grabs the attention on every level.

From the opening onslaught of Children Of Deceit, Job for a Cowboy unleash their recognisable death metal/metal power but with a fuller and one can almost say more elaborate sound and texture. The track scrapes flesh from the ear as it thrusts its muscular riffs and full intensity through seeking to consume the senses but it is veined by guitars, melodies, and technical manipulations that are as scorched and venomous as you will find anywhere.  As mentioned now solos appear on tracks and though something almost unexpected and new for the band it is an easy and impressive fit.

As always listening to Job for a Cowboy is a testing and challenging experience, they are a band that requires a deliberate focus rather than a passing listen to appreciate all their attributes and this album is no different but the new progression to their sound and the additives brought from the new members and the determined ideas of the band as a whole are openly audible and enjoyable and again understood and complimented by returning producer Jason Suecof (The Black Dahlia Murder, Whitechapel). Tracks like the excellent Nourishment Through Blood, Imperium Wolves with its excellent cello/keys ending though the song as a whole blisters and abuses perfectly, and the tumultuously intense Black Discharge, leave one numb, bruised and fully satisfied from being obliterated by a band that has found something very flavoursome to add to their already mighty sound.

Tongueless And Bound and The Manipulation Stream are the two songs that really ignited the most on the album, both slicing though the senses with technical precision whilst tearing the wounds wider with a pummelling that aches rather than numbs. Every track on the album is immense but this pair offer extra sparks from the guitar work of Glassman and Sannicandro through to the dehabilitating rhythms of Rice and Schendzielos. Davy too has upped his game on the album offering more variety to his delivery whilst still spewing and spitting the politically and socially themed lyrics as vehemently as ever.

Demonocracy will not be the album of the year for everyone as the band demand much more than most are willing or able to give with their hungry and intense sounds but it is hard to think of a death metal album as fulfilling and inspired as this for a long time. Job for a Cowboy might not be a flavour for everyone but with the new album they offer much more for many more making it at least a definite investigation.