Formed in 2005, thrashers Devoid has emerged as one of the most noticeable and notable bands to emerge in recent years in Indian metal through their accomplished and commanding sound and their acclaimed debut album A God’s Lie. The Demonstealer Records released mix of thrash with a healthy shadow of death metal to its breath put the band in a brighter spotlight certainly at home if not quite as potently further afield. Now with the release of their impressive new EP, The Invasion, the Mumbai quartet has unleashed a darker, heavier, and more dramatically intensive declaration which could thrust the band into the widest awareness and recognition. Exploring more of their death metal brutality without diminishing the thrash endeavour and voracity which set the band’s rise in full flight, the release is an absorbing and ferocious encounter with a craft and imagination which intrigues and places Devoid onto a new lofty plateau.

Starting out as a trio consisting of vocalist and rhythm guitarist Arun Iyer, drummer Shubham Kumar, and lead guitarist Keshav Kumar, with bassist Frank Pawar joining the following year, the band first made their mark by winning Campus Rock Idols, a big competition for rock and metal bands back then. Shows and tours with bands such as Demonic Resurrection, Bhayanak Maut, Myndsnare, Kryptos, Brute Force, and Infernal Wrath brought the band’s sound and presence into an eager and swiftly growing fanbase. 2010 saw the release of A God’s Lie as well as a tour across cities such as Bangalore, Mumbai and Pune with UAE death/thrashers Nervecell. Since then the sharing of stages with the likes of Cradle of Filth, Decapitated, and Sybreed has only cemented and accelerated Devoid’s stature in India and surrounding areas which The Invasion threatens to take to new climates. With line-up changes seeing guitarist Sanju Aguiar replacing Keshav Kumar in 2011 and Abhishek Kamdar coming in for the departing Pawar a year later, Devoid has evolved its sound and intensity into a stronger and darker yet just as contagious creative savagery; a powerful storm to thrill the full global presence of thrash metal.

The release emerges with a provocative and atmosphere instrumental intro, a guitar shaped design filling intimidating and

towering epically sculpted walls of sound. The acoustic caress which expands throughout the piece coaxes the imagination to dare a journey through the imposing and epic heights surrounding them, leaving thoughts exposed for the following ferocity which explodes in the shape of the title track. The opening narrative of the concept of the world under an invasive fury is expelled though a rasping vocal malevolence as punishing rhythms aligned to exhaustive riffery and sonic causticity lays welcome siege on the ear. It is a furious and compelling mix, the thrash heart and core of the song irresistible in its brutal consumption of the senses and the malevolent death bred breath of the track an insidious but potently alluring temptation. Opening up its melodic arms with a great solo and reducing the energy of the attack with an equally intensive yet more respectful thickly caressing ambience, the rage dissipates into a closing fade but leaves a lingering menace which is soon taken up by its predecessor.

Pandemonium Is Over goes straight for the throat with even more dangerous and vicious rhythms in league with corrosive riffery whilst the excellent vocal squalls of Iyer are like lightly grained sandpaper and pleasingly abrasive and inciting. As the track impresses and steers a wide awake appetite for the EP into even greedier urges of hunger, it is fair to say that the band is not delving into new unexplored realms but still creates a proposition which is fresh and antagonistically eventful, a predacious chewing of the senses and imagination which stands aside of plenty of other bands uniting the two core essences of the band’s sound.

To this point The Invasion is a tremendous adventure but soon given a new adrenaline shot of contagion and riveting hostility with Brahma Weapon and the hellacious closing track, The Grand Design. The first of the pair is an exhilarating and exhausting blistering of the ears, riffs insatiably hungry and acidic whilst the rhythms of Kumar are so accomplished and malicious in their bone splintering sculpting  that they hardly seem to break sweat, something the listener cannot say once drawn into the intensive tempest of addictive enterprise and sonic violence. The best track on the release it is almost matched by the EP closer, a song with a lumbering heavyweight presence and an almost Pantera like vehemence and ferocity to its stalking rabidity, musically and vocally. Crawling over the listener with an intrusive leering breath and potentially lethal sinews, the song never quite unleashes its full vitriolic energy but certainly increases its intensity and hunger allowing its fearsome rancor to soak every second of the outstanding quarrel.

Expanding and exploring their previous more old school trash inventiveness, Devoid has moved into being an unpredictable and imposingly darker force. The Invasion suggests this evolution is still a work in progress making the band’s next proposition easy to highly anticipate whilst the EP declares itself an encounter all thrash metals fans should make.

Laying another huge prod on the world as the metal scene in India shows its current strength, thrashers Sceptre release their second album Age Of Calamity, a release which launches a blistering display of rhythmic and sonic predation to easily win over the passions. An album of ten stirring tempests, it is a skilled and inventive provocation which though maybe not ground-breaking makes for an exciting and enterprising treat. The craft and formidable accomplished statue of the album is not really a surprise since the band has been a major force in the Indian metal underground since forming in 1998. That time has only seen a single EP and album spread the word to the outside though, something which has not unsurprisingly yet achieved the strongest success in spreading the word further afield but with this impressive new assault maybe the Mumbai quartet’s time to waken the world to their presence has come.

Sceptre has gone through a few line-up changes over the past fifteen years whilst forging a strong live reputation which has been enhanced by their self-titled EP of 1999 and more so with the debut album Now or Never which came out in 2008. Now with a line-up of vocalist Samron Jude, guitarist Gilroy Fernandes, bassist Janus Sayal, and drummer Aniket Waghmode, the band make a loud and formidable statement with Age Of Calamity that cannot be ignored. Exploring a concept of attitudes towards women and society in general, the former an evocative and highlighted situation in regard to India over recent times in the eyes of the world, the album pulls no punches lyrically or musically yet looks at the issues with poise and compelling endeavour whilst igniting the imagination From the melodramatic slightly sinister and haunting intro Solitude, the album suggests and coaxes thoughts and emotions, often dragging them into the heart of the album as the subsequent songs unleash a compulsive fury.

The second and title track goes straight for the jugular physically and emotively, riffs and rhythms laying a rapacious hand on the 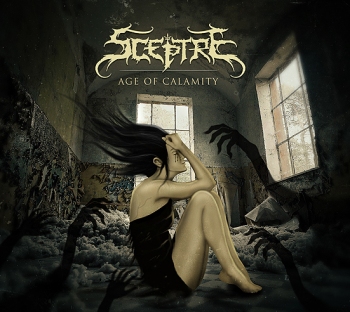 ears whilst a potent groove entices even greater attention to the emerging storm. The vocals of Jude are soon scowling and barracking with a strong and appealing causticity which is harsh but allows clarity to the lyrical narrative for full inciting effect. Stomping with a thrash bred urgency and hunger the song equally veins its charge with tight and engaging sonic designs around a great throaty bass intimidation, the blend breeding a sound which is somewhere between Testament and Exodus with All That Remains.

The following Wrath of God raises the temperature and strength of the album to even greater heights from the impressive start, its swipes of acidic guitar flames and predatory intensity clad riffs irresistible especially within a framework of antagonistic and feverish rhythms. A varied scourge of vocals from clean to guttural voracity only accelerates the toxicity of the scintillating track whilst its niggling groove within further thrash fuelled rabidity cements lustful responses for its outstanding tsunami of passion and predation. Its anthemic core is equalled in might by the next up Prophesy Deceit, a deliberately seductive beast with addictive grooves and strict riffery aligned to stalking rhythms and the continuing to please vocal delivery where again the lyrics are allowed a clear persuasion within their raw and combative intent.

Arguably the two songs make the pinnacle of the album though it is a continuing debate when the likes of Lake of the Traitor, a song dawning on elegant melodies evolving into rasping aggressive incitation developing an eventual contagion which gives little respite in its bait, and the equally addictive scourge Fatal Delay explore their depths with adventure. The second of the pair has a waspish lilt to its riffs and grooves merged into annihilistic ferociousness vocally and sonically. The track epitomises a Sceptre track, eventful, unpredictable, but persistently accessible with the kind of familiarity you embrace rather than dismiss.

7 Seals employs similar exploits in riffs and grooves to its predecessor and some other tracks but with a raptorial charge to its body and infectious potency to its persuasion makes for a tasty morsel to rage with whilst Parasites (of the State) provides a ruinous expanse of emotive frustration and aural antagonism which only adds further sustenance to an already greedy appetite for the album. Though both songs fail to reach the same levels in adventure and temptation as predecessors neither leaves satisfaction low or pleasure hungry, the same easily applying to Judgement Day (End – A New Beginning), a very decent melodic outro to the album and the following bonus track Lest We Forget which brings the album to an end. The song is more metalcore borne and does fall in the wake of the more trash led adventurous triumphs elsewhere, but it is impossible to ignore the craft and passion igniting its caustic breath and sizeable creativity.

Age Of Calamity is a gripping and impressively  enjoyable brawl on the senses and emotions which may not be setting new boundaries for thrash/metal as a whole but in providing an intensively thrilling and addictive onslaught of craft and enterprise makes it and Sceptre a must check out and have encounter for 2014.