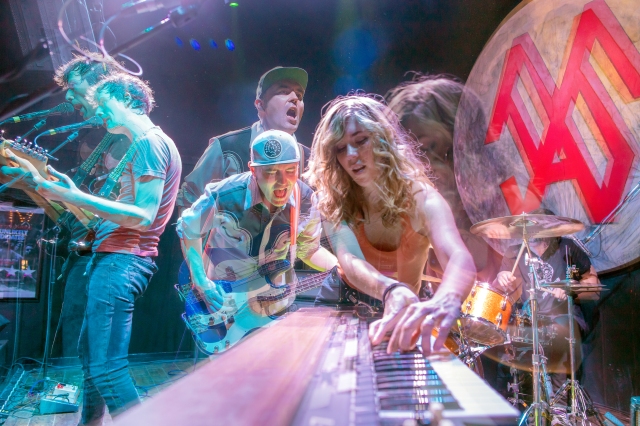 As a viral infestation continues to consume the world we suggest there is a second outbreak imminent this time in the delicious contagion of the insatiable sound that the Mr Sophistication EP unleashes. The record is the new offering from US outfit Mean Motor Scooter, a release which could be no more seductively sinful and soul enslaving than if the Devil had cast it whilst holidaying amongst the vixens upon Planet Venus.

Hailing from Fort Worth, Texas, Mean Motor Scooter has insistently lured attention and acclaim through the likes of their 2017 uncaged debut album, Hindu Flying Machine, and last year’s EP, TV Baby. Though new to the band, if we are honest, hindsight listening reveals exactly why they have gripped keen local and national support and a further deluge of listens to Mr Sophistication can declare that the quartet has bred their most essential moment yet with.

The band’s unique sound is distilled in a bedlamic liquor of garage rock and punk with surf and psych rock stilled froth. Its character lustfully springs belligerent mischief upon the ears as its exploits chop away at the senses whilst urging the body to dance. It is a proposition which swiftly and urgently infested our musical instincts and desires through EP opener Aristobrat.

Immediately Sammy Kidd’s guitar swings through air, its riffs a compelling cleaver to the senses quickly followed by his just as magnetic vocals and the equally gripping rhythmic antics of bassist Joe Tacke and drummer Jeffrey Friedman. With the temptress backing vocals of Rebekah Elizabeth escalating the temptation as she enterprisingly fingers keys, the song lustfully got under the skin in no time, breeding an even richer unshakeable contagion through its subsequent riot of a chorus. Like something akin to a meltdown between The Scaners, Escobar, Jay Reatard and The Vibrators but with attitude stamping down unmistakeable individuality, it is an addictive start for the EP and a dependency which only escalated thereon in.

The Void quickly fed our craving, its opening hook alone enough to have us twisted up in its bait before the song followed it up with vocal and rhythmic manipulation which bordered on pandemonium. Kidd again is the ringleader to the creative disorder, his words bitch slapping the world as Friedman’s beats pummel the senses with unscrupulous dexterity. With punk and garage rock textures colluding with surf harmonies and frenzied melodies, this too is a song which had us in drooling fixation; Portals soon drawing further lust as it unveiled its surf rock breeding within a warped psych rock atmosphere. Luring and seducing with every breath, the track tangling the imagination up in its psychotic twists and increasingly volatile breath.

Zombie Cop is visceral pop within a cosmic soundscape bullied by punk rock tempestuousness and simply gripping from the first to last second of its exhausting two minute carnal stomp before leaving Put Me Down Like a Dog to spring a just as riveting finale on ears. A psychobilly riff chained the appetite first, its melodic clang instant manna to these ears and soon backed by a broken blister of lo-fi trespass; a feral captivation again infested by the seductive haunting of Elizabeth’s keys. That initial mutant groove continued to centrally vein the track, everything swinging from its incessantly hypnotic hold as the sonic maelstrom around it discharges just as irresistible slavery.

Untamed and ravenous, it is an energy sapping, pleasure igniting end to an EP even more voraciously intoxicating with every element and song united. The world is under siege again but this time only good if debilitating times are set to devour courtesy of Mean Motor Scooter.